September 2, 2014 is Your Chance to See the Colorful Procession of Ships at the MIFUNE MATSURI (御船祭)- Held Once Every Twelve Years In and On the Waters Around the Kashima Grand Shrine (in Kashima) 31 August, 2014 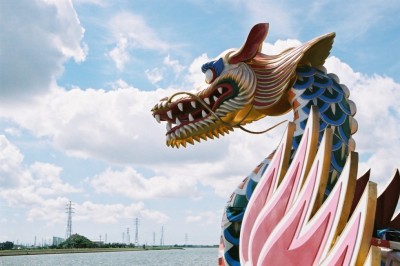 On September 2nd, the main day of the  MIFUNE MATSURI Festival ( held once every twelve years), a special dragon-headed boat escorted by dozens of other vessels-will carry a portable shrine ( bearing the deity of the Kashima Grand Shrine) through the waterways near Ibaraki Prefecture`s most important shrine.

For at least 1,300 years ( and some believe as long as 1,700 years) the Kashima Grand Shrine (Kashima Jingu) has been one of the most important spiritual sites in Japan. Established near what was once the mouth of the Tone River, which had provided convenient access to the interior of Eastern Japan ( where there was an extensive system of lake and river transport) and which made possible the conquest and development of this region by the forces representing the Yamato Court, the shrine has long been considered the protector of this part of Japan (both from human enemies of the empire and  in later ages from earthquakes) and a place to pray for victory (which until the end of WWll meant victory in battle- but now for success in sport or exams, or traffic safety etc.). It has also been a place to come to to pray for or meditate over improving ones skills in swordsmanship. This is most probably because the area has been since ancient times a good source of iron- perfect for smelting Japanese swords. Some of Japan`s greatest sword masters had their EUREKA moments at this shrine- having conceived of new techniques after having done asceticisms and meditation on its grounds. The 223.5 cm long sword on display in the shrines treasure house (one of only two National Treasures which can be found in Ibaraki Prefecture) is a testament to the area`s connection to swords. 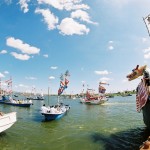 About 100 smaller craft flying distinctive banners will be escorting the deity-bearing dragon-ship (which is called the GOZA FUNE 御座船). They will meet up with a vessel sent out by the Katori Grand Shrine.

And while the Kashima Grand Shrine is still an important place of pilgrimage and one of Ibaraki Prefecture`s most popular tourist attractions, vistors will be surprised to find the shrine`s grounds temporarily closed to all visitors from 9:30-12:00 on Monday September 1, 2014. The reason its gates will be closed is that From 10 am, a messenger dispatched by the Emperor will enter the hsrine, bearing greetings and offerings to mark the beginning of a festival held once every twelve years- the MIFUNE MATSURI (or MIFUNE SAI).

The fact that an Imperial Messenger is sent is a reminder that the Kashima Shrine is not a JINJA (as most Shinto shrines are called), but a JINGU (神宮) which indicated a special connection to the Imperial Family- other such shrines are Ise Jingu, Atsuta Jingu, Meiji Jingu and Kattori Jingu (which is located just to the south of Kashima ).

It came to have this association by starting out as the protectivie shrine of the great Fujiwara Family (originally the Nagatomi) who for centuries advised the Emperors and became closely connected to it by blood by marrying daughters into the imperial family. 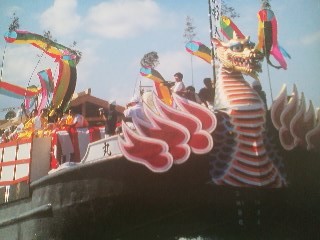 After the messenger (called CHOKUSHI, 勅使) has performed his duties, the shrines will be opened once again to the throngs of pilgrims and tourists who come to pray, appreciate the architecture ( the shrine`s main hall is rare in that it faces north- representing northern expansion of the empire, or protection from enemies in the north), feed the deer- the messengers of the shrine`s deity (there are about 20 of the poor flea-ridden creatures kept in a pen. There used to be endless wild deer in the forests around the shrine, under protection of the Shogunate. Westernization and modernization and the loss of traditional respect for living creatures spelled doom for ALL the wild deer)- or just to bask in the serenity of the sacred forest- a mere shadow of what once was- which still stands beyond the main hall- within it, you can find the curious KANAME ISHI- a stone sticking out of the ground which is believed to protect this part of Japan from earthquakes. A lot of good it did for us back in 2011! 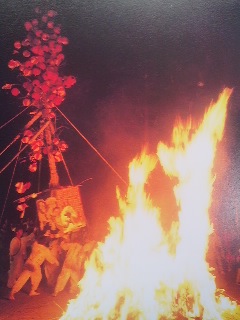 Then at 4 pm on the 1st, there will be another ceremony- the CHOCHIN MACHI, in which myriad paper lanterns are tied in bunches onto bamboo pole and then tossed into a huge bonfire.

After that, at 8 pm, a ceremony will be held to break away a part of the spirit of the deity of the shrine (TAKEMIKAZUCHI NO MIKOTO) for placement in a portable shrine ( MIKOSHI) so it can be a part of a procession of ships the next day. 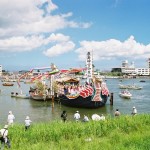 The waterway procession will begin at 10 AM on September 2nd

The main day of the MIFUNE MATSURI, the most interesting for visitors, is September 2nd. From 8 am to 4pm  the portable shrine will be carried on a large and colorful wooden ship with a dragon-headed mast escorted by about 100 smaller vessels- all flying an assortment of interesting banners. The event evokes images of what this part of Japan was like until modern times: a water-world in which the most important means of transportation was by ship along an intricate system of connected lakes, ponds, rivers and canals. 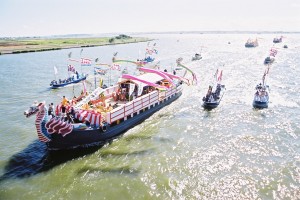 But why, you may ask, is the festival held only once every 12 years? Well, it would just be too much trouble to hold such an extravagant event every year, so during the Meiji Period it was decided to have it only on every Year of the Horse- which comes around every twelve years.

There are two reasons cited by shrine officials as to why the Year of the Horse would be appropriate for holding the shrines most extravagant festival:

One, in accordance with ancient Chinese Yin-Yang Theory (the science of pre-modern Japan) the horse represents the most powerful positive YANG energies, perfect for driving away evil forces.

Two, it is said that the Kashima Shrine was established in one Year of the Horse, in time immemorial.

The shrines official explanation of the origin of the festival also gives two separate roots:

One, that in the 8th century chronicles of Hitachi Province (Hitachi No Kuni Fudoki) there is one sentence describing how ships were built and offered to the shrine

and two, that it commemorated the Empress Jingu`s invasion of the Korean Peninsula.

The fact that in the early years of the Yamato Empire coscripted farmers from Eastern Japan (including whatis now Ibaraki Prefecture) were sent to the island of Kyushu for defence of the archipelgo against what was then seen as the imminent threat of a Chinese invasion. These conscripts were called SAKIMORI and there is in fact a whole genre of classical poetry known as SAKIMORI NO UTA.

When farmers were first drafted into military service in the Meiji period, these ancient conscript warriors were celebrated as their glorious antecedents.Two of the Kashima Shrine`s major festivals were popularized in this way during the Meiji Period- the Saito Sai of March which celebrates the SAKIMORI and the MIFUNE MATSURI who ships brought back memories of Empress Jingu`s fleet which set out to attack the Korean Peninsula.

Nearby Kattori Jingu ( originally on the opposite bank of the outlet to the sea  across for the Kashima Jingu), also dedicated to a related martial deity FUTSUNUSHI NO MIKOTO, was used by the Meiji Government in a similar way to promote the miltary spirit. It also has a major festival held every 12 years in the Year of the Horse: the SHIKINENJINKO-SAI (式年神幸祭)- already held this year in April.

After having attended this festival sometime during the Meiji Period, Ito Hirobumi, the first Prime Minister of Japan under the Meiji Constitution (later assassinated in Korea) conveyed the emotions it evoked in him in a poem:

which I tentatively translate as:

The deity must surely feel, the sincerity of my yearning, to serve his majesty as they served in days of yore

Which sums up what I am trying to say here. That while now this festival is now fun andd photogenic, it was originally revived by the government to support the martial spirit of the nation.

No hint remains of that today, as the festival ispromoted as one that brings good fortune and drives away bad luck. 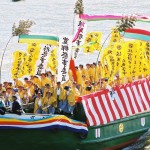 One of the interesting ships escorting the GOZABUNE 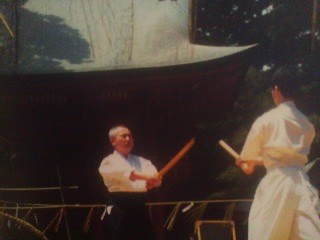 Practitionors of  traditional Japanese martial arts  (KOBUDO) can  be seen on certain days  demonstrating their techniques in front of the Main Hall as an offering to the shrine and as a sort of progress report to the deity regarding the state of their skills.

On September 3rd there will then be additional ceremonies to place the deity back into the main shrines and signaling and end to the festival. 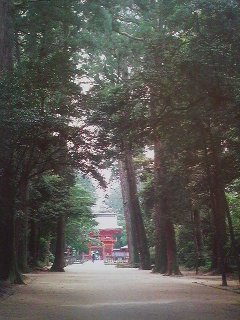 Kashima Shrine`s magnificently solemn sacred grove is designated an Important Natural Asset of Ibaraki Prefecture, though what remains of it now is a mere shadow of what it was like in centuries past. 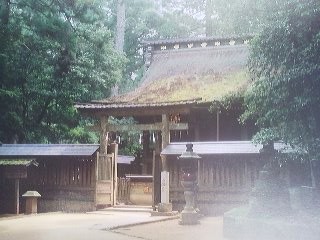 The Okuden (奥殿), located about 400 meters past the Main Hall, was originally built by Tokugawa Ieyasu, the founder of the Edo Shogunate, after his victory at Sekigahara- which established him as the ruler of all of Japan. This hall was the original Main Hall and its first completed in 1605 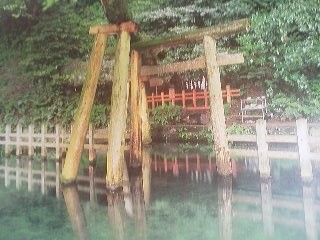 The MITARASHI IKE POND (御手洗池) was long use as a place for pilgrims and devotees of the shrine to purify themselves after their long journeys to the shrine. The great haiku poet Basho wrote of this sacred pond- 涼しさや神代のままの水の色 (SUZUSHISAYA KAMIDAI NO MAMA NO MIZU NO IRO)- Such coolness- and the color of the waters remains unchanged since the Age of the Gods (translated by Avi Lnadau)

Since the 2nd is a weekday, and it takes about two hours to get to Kashima- from either Tokyo or Tsukuba, I am not sure if I would recommend that you make the trip. The boats certainly look spectacular in photos taken with telephoto lenses. Probably not as impressive with the naked eye from an overcrowded bridge.

I am still tempted to make it out there, though, since if I do fell any pangs of regret I will not be able to achieve closure for another 12 years! 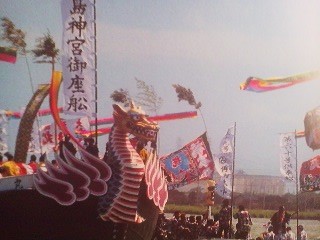 More than 100 vessels flying colorful banners will accompany the dragon-headed GOZAFUNE which carries the portable shrine in which the deity is said to be borne. 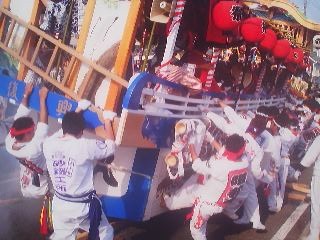 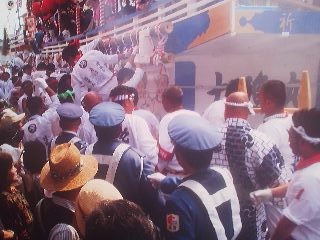 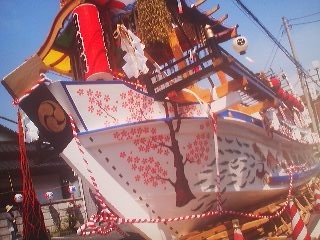