Myoga (茗荷)- One of Japan`s Distinctive Flavors, from summer through autumn 8 July, 2014 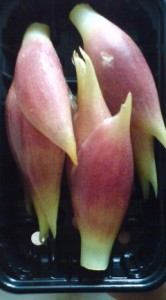 Myoga at a supermarket in Tsukuba

“Do you know this flower?” asked Hiroshi Ogawa last autumn as I came walking through the door. Ogawa-Sensei, a retired science teacher who now spends much of his time studying languages, taking pictures and growing vegetables,  is an expert on local flora and fauna and often delights in having people guess what certain plants or flowers are. Once again, he had me stumped.

Still I gave it a shot, and after a long hard look suggested that the delicate white blossom was an orchid of some sort. The twinkling in his eye and the sly grin on his face let me know that I was off the mark even before Mr. Ogawa pulled out the vegetable from which the flower had grown- one of Japan`s most distinctive flavors and a favorite of many afficcionados of Japanese cuisine- MYOGA!

The flower I had seen had had the surrounding bud stripped away from it, making it unrecognizable to me. Ogawa-Sensei had gotten me again! 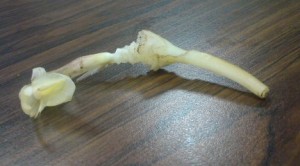 What is this flower? Some sort of orchid?

The part of myoga that is actually eaten in Japan is the bud. When the flower does bloom, it is normally considered too late to be eaten. Thus, looking at Ogawa-Sensei`s blossom, I realized that the long summer-through-autumn myoga season would soon be  coming to an end.

Living in Japan, you might get your first taste of myoga in the year sometime during the rainy season (as I did today), as a pleasant addition to the meal at a time of year when nothing really tastes very exciting. It might be served in the miso soup, as tempura, or just sliced raw to be eaten with soy sauce as an accompaniment to some sake. The fresh crispiness of the newly sprouted myoga is a welcome indeed during the season when everything else seems to be soggy. 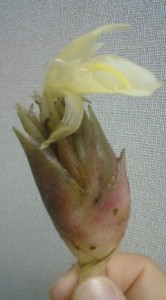 Its the flower of the myoga plant !

When the rains end and Japan`s summer begins in earnest ( in late July), those who enjoy Japanese noodles will surely notice that as part of the seasonings offered on the side ( YAKUMI, 薬味), instead of the usual finely sliced and strongly flavored NEGI ( welsh onions, you will find finely sliced myoga.

The first time someone used to having the negi without being prepared for the difference adds the myoga instead,can be a truly startling taste experience. Instead of the sharp, oniony flavor one expects, one encounters a completely different, truly Japanese taste.

Over the past few weeks while thinking about writing this article, I have been asking almost everyone I mee about how they would characterize this unique taste. In the end, out of all the responses I got, I think it was Mayumi Yasuoka who put it best- myoga tastes like SOIL and WATER!

During Japan`s hottest days of August and early September, nothing can be more COOLING  than myoga pickles or myoga SUSHI. Yes, that`s right, SUSHI! Looking at it you could even mistake the pickled myoga for some sort of seafood!

This past summer, the same Mayumi-San who was best able to put the taste of myoga into words ( in my opinion), brought me a beautiful and deliciously refreshing batch of myoga sushi with some myoga pickles. I will post her recipe within the next few days. 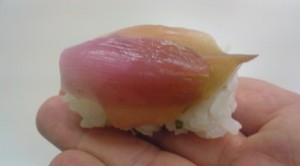 I have mentioned already that the myoga season runs from summer through fall. I would like to clarify that however, and say that  in Japanese myoga eaten in summer is known as summer myoga ( natsu myoga- which comes out from June through August) while that eaten in autumn is the slightly larger aki myoga ( autumn myoga- which comes out between August and October ). 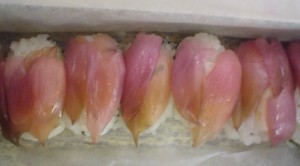 Eating myoga as a vegetable is a custom limited to Japan. In fact, the scientific name for this relative of ginger, Zingiber mioga,  is derived from its Japanese name.  It grows from Northern Honshu Island all the way down to Okinawa, but is produced commercially in most abundance in Kochi Prefecture (on Shikoku), Akita Prefecture ( in Northern Honshu), and in Nara Prefecture ( in Western Honshu).

Nutritionally speaking, not only does myoga contain plenty of calcium and potassium, but it is to also help improve circulation, stimulate the appetite, and help with digestion. 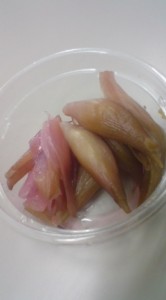 There is no talking about myoga in Japan without mentioning that eating myoga is said to cause forgetfulness. I have my own theory about the origin of this folk belief. One thing I have noticed from my discussions with people about myoga, is that everyone considers it an ADULT TASTE. In other words, children dont like it. It also seems that older people, and by that I mean elderly people are often very fond of it. Well, maybe that is why eating myoga is linked in the Japanese mind with memory loss- those who eat alot of it really ARE forgetfull. 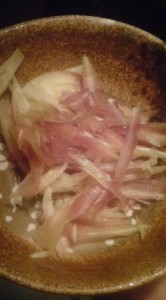 myoga sliced up as a seasoning (yakumi) for somen- summer noodles

Seeing Ogawa-Sensei`s myoga flowers last October mean that there was not much more time left to enjoy this  distictive Japanese taste. At the supermarket last year I  was  able to find fresh myoga available through the middle of November . But you can start right now in June! After you`ve become an incurable addict ( like so many Japanese gourmets have), DONT FORGET! You read about it first right HERE!

And if you have any good ideas about how to put myogas flavor into words- let me know.

Here is Mayumi-San`s recipe for MYOGA PICKLES (in her words):

You may use any kind of Japanese vinegar. Boil myogas for just 10 seconds and then put them into iced water immediately so that their texture is kept crispy. Mix sugar (1/2 cup), vinegar (3/4 cup),water (1/2 cup), salt (2 tea spoon (kosaji) in a pan, and boil them. Then cool ( this is called tsuke-zu). Put the cold myogas into the tsuke-zu in a bowl and mix. Keep pressing on them using a small dish  to keep their crispiness (paripari-kan) and good appearance.

And her original recipe for MYOGA SUSHI:

You may use any kind of Japanese vinegar.

Mix sugar(15 grams), vinegar(18 grams), and salt (5 grams) in a pan.  Boil gently, and then cool ( this makes what is called sushi-zu).You may make 1k  su-meshi or shari   ( a mixture of fresh steamed rice (takitate gohan) with sushi-zu) by using this amount of sushi-zu. Put a couple of Myoga pickles on  hand-shaped su-meshi.  Buonissimo!