A Gastronomic Tour of Italy- Near the Foot of Mt. Tsukuba ! At La Stalla (ラ スタッラ), with Chef Shigeyuki Sato as your guide 4 June, 2014 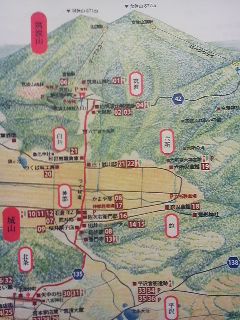 Kangori, Tsukuba is on the southern edge of the valley you see in the center of this map of  the villages along the southern slope of Mt. Tsukuba. The red rectangle with the numbers 14 and 15 inside indicate the location of the riding club Harvest and the restaurant La Stalla 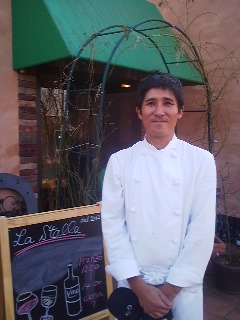 Shigeyuki Sato- who will conceive(based on your own specifications), and then prepare your meal for you at La Stalla. He will also give a detailed explanation of the origins of each dish served as well as the ingredients he has selected and used.between each course.

Want to tour the Japanese countryside? If you are living in or visiting the Tsukuba Science City, the old village of Kangori (神郡) in the city`s northeastern quadrant is the ideal place to head to and spend the day.

There near the foot of Mt Tsukuba, and with magnificant up-close views of that sacred mountain`s twin peaks, you can get a glimpse of rural Japan as it must have looked 100 or even 200 years ago.

You can wander its maddeningly narrow roads lined with traditional homes and shops- some grand and standing within gated-compounds and others quite modest and rustic. The one thing they all have in common is their beauty- their traditional Japanese beauty. A trip to Kangori is a true time slip, with hardly a modern building to disturb the scenery.

Gaze out at the rice fields that fill the valley which separate the village and the foot of Mt Tsukuba. They are not only a dazzling and dancing green (in season), but also of great historical significance- having first been made into grid-pattern lots back in the 7th century as part of the JORI land development program.

Search for mysterious sacred stones, some hundreds of years old, attesting to forms of worship which have long faded into history.

You can even hike up to Kokage-San Jinja Shrine, now forlorn but once thronged with worshippers, which is dedicated to silkworms- with a local legend telling of a ship which in ancient times brought silk worms to this area from India.

There are certainly plenty of interesting sights to keep you occupied. But as they say in Japan HANA YORI DANGO ( The dumplings are more important than the cherry blossoms)- which expresses the fact that in Japan no matter what the plan is, it is always the FOOD that will be the center of the experience- and  what will be most strongly remembered and talked about later. 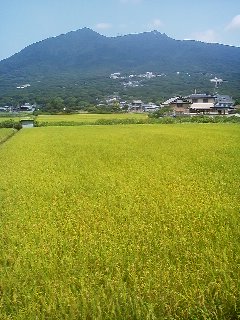 The rice fields of Kangori, Tsukuba.  This area was first surveyed, split-up into lots, and developed for rice cultivation in the 7th century  as part of the ancient JO-RI land development system (条里制)

And despite all the sights, it is  a FOOD EXPERIENCE that will no doubt be the most lingering impression you have of your trip to Kangori, as well- that is, if you do the smart thing and call in advance to make a reservation at La Stalla, a restaurant located on the premises of a (horse) riding club called Harvest. 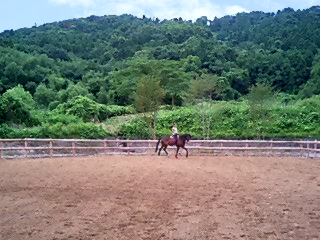 La Stalla is located on the grounds of this riding school (HARVEST) in Kangori, Tsukuba. This photo is from their website.

And because La Stalla is an ITALIAN RESTAURANT (as you might have guessed),you will probably find it ironic, that after your tour of a such a quintessentially Japanese neighborhood, your deepsest impressions will have been of the gatronomic tour of Italy you will have made, under the skillfull guidance of chef Shigeyuki Sato. 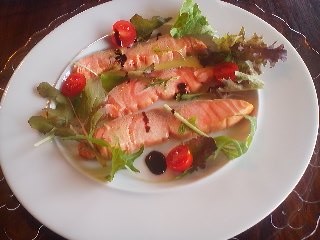 La Stalla, which appropriately means STABLE in Italian, is a tiny establishment which could not accomodate many more than ten people. But that`s really just as large as it should be considering the PERSONAL CARE  chef Shigeyuki Sato puts into creating and serving your meal.

You see, at La Stalla  there are no walk-in customers. You have to call in advance, tell the chef when you`d like to dine, how much you`d like to spend, and if you`d like, give some specifications about the meal you`d like to have (in my case I asked for a vegetarian meal- and it was remakable one I was served!)

The chef will then plan your meal for you, considering yor tastes, the season, and available ingredients, and then go to market to purchase what he needs.

He will then, during your meal, give you a detailed  explanation (in Japanese) of how each dish was prepared and with what- between each course! ( as you impatiently eye the delicious food sitting in front of you, waiting for him to finish his talk so you can dig in!) 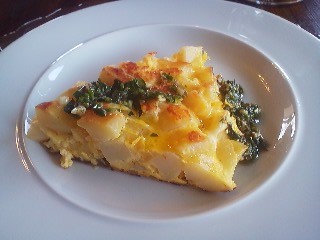 One of my courses at La Stalla – a fritata. Made with a special variety of potato, eggs, milk , cheese, and a bit of salt. Slowly fried over a period of 40 minutes, then let to cool slowly and topped with salsa verde. There is goats cheese is oregano and basil on the side.

Being A New Yorker, I am no stranger to Italian food. In fact, I could almost say that I was brought up on Italian cuisine (when dining out). But in New York, when we talk about Italian food  we are talking mostly of SOUTHERN ITALIAN food- since most chefs are actually Italians or Italian Americans who hail from Sicily or Naples.

In Japan, however, despite the fact that there are Italian restaurants in abundance, there are FEW Italian chefs who are actually Italian . What you do have are Japanese who have gone to various regions of Italy to serve time as apprentices- because of their devotion and dilligence you might even call them culinary culinary pilgrim-monks!

They bring back to Japan their knowledge, skill and enthusiasm, and as a result the Italian dining in Japan is almost always a satisfying experience.

Sometimes, as in the case of La Stalla, it is downright thrilling!

I guess you could say that the unique Japanese approach to a profession or craft- the seriousness, dedication, the almost religious attitide towards work, makes eating Italian food in Kangori, just another Japanese experience. 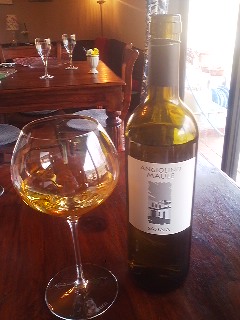 Interestingly, chef Sato did not start out his working life in the restaurant business- though his having been born in Wakkanai, Japan`s northernmost city on the island of Hokkaido, gave him an early taste of the freshest seafood- especially sea urchins and abalone, for which that area is famous.

After graduating university Sato-San started working for a major Japanese Bank, at which he was moved from section to section over the years. While posted in the legal division, he decided to start studying for Japan`s notoriously difficult to pass bar-exam.

All the cramming, on top of his regular work, might have weakened him, who knows? But anyway, Sato slipped and fell, severely injuring himself. In fact, he didn`t know at the time whether he`d ever be able to walk again. 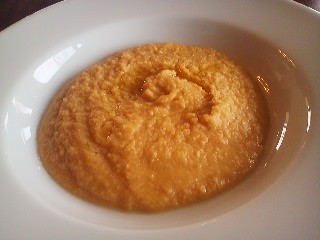 When he did start to recover, though, he realized that he didn`t want to go back to the life of the salary-man. He was overcome by a yearning to return to the great sensations of his early childhood- the taste sensations he had experienced back in Hokkaido.

This, coupled with a desire to get away for a while and make a clean break with his old life, led to the decision (with the approval of his wife) to go study cooking in Italy.

He lived in both the Piedmont and Tuscany, studying not only cooking itself, but how to select the best ingredients at market. 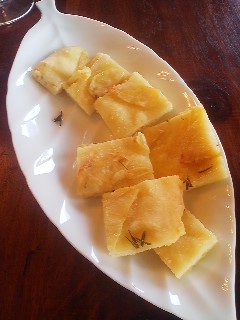 Returning to Japan he lived in his wife`s hometown in Saitama Prefecture (where he still lives today- meaning he has a two-hour commute EACH WAY when he comes to cook for you in Kangori!) he joined an equestrain club located in a remote valley near Mt. Tsukuba- the Tsukuba Harvest Riding Club. On the premises there happened to be an unused space which Sato believed could be put to use as a restaurant. 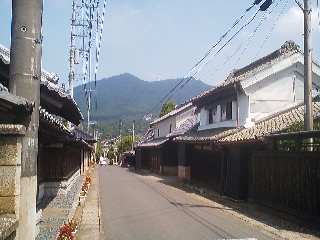 Kangori, Tsukuba. This area thrived in the 17th century when this was the main road for carrying material up to the Chuzen-Ji Temple (now the Mt. Tsukuba Shrine). The Tokugawa Shoguns, especially the third Shogun Iemitsu believed that the temple helped protect Edo (now Tokyo) from the unlucky northeastern direction (kimon). Iemitsu spent large sums of money expanding the temple.

At first he created his dishes almost exclusively for the clubs members- but word got around quickly! ( It was one of the club`s members who actually first invited me out to try La Stalla!)

Despite the long drive out to remote Kangori from Tsukuba`s newer residential neighborhoods you will hear no complaints. Besides the amazing gastronomic journey to be had at La Stalla, there is the idylic setting which in itself can bring satisfaction. You might even want to bring your binoculars if you are a bird-watcher, as you can spot numerous species while you dine! The riding school also has goats, rabbits and plenty of dogs and cats on the premises- not to mention the beautiful horses. 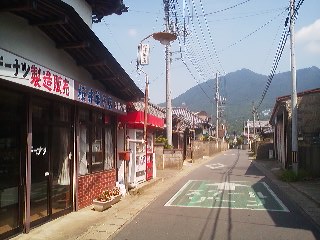 La Stalla is open for lunch BY RESERVATION ONLY from Wednesday through Sunday.

You can couple your meal with a tour of Kangori, Hojo, and the other villages at the foot of Mt. Tsukuba. And I am sure that the magical 2 hours you spent at La Stalla will prove to you (once again) that in Japan the dumplings are better than the flowers!

I have written more about touring Kangori here: