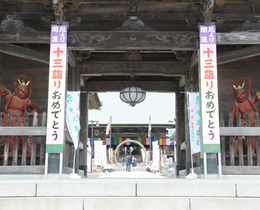 The Muramatsuyama Koku-zo Do Temple, founded according to legend in the year 807 by the great priest Kukai (Kobo Daishi) is famous as one of the three most important place in Japan for celebrating JU-SAN MAIRI – a rite of passage for 13 year olds (or 12 year olds if you count ages the traditional way- KAZOE DOSHI – in which you are one year old at birth!)

Most people associate the village of Tokai-Mura, located about half-way up the coast of Ibaraki Prefecture, with its nuclear power plant, and  the ” little” accident that occurred there 14 years ago, in which 2 people died and many more were exposed to excessive doses of radiation which also leaked out into the surrounding area. Memories of this incident, even with the passage of a decade, have hardly faded, if at all, and there are still people I know who would never  buy any of that village`s  delicious produce ( pears, peanuts and dried sweet potatoes), let alone visit there. Some might call this a kind of discrimination, and this could certainly lead to an interesting debate about where the line should be drawn between prejudice and good sense . Yes, it might be perfectly safe, and by not buying Tokai Mura`s potatoes you are hurting their farmers. On the other hand, the Japanese government  has most probably not let us know the full extent of what happened back in 1999, or  about the lingering effects of the radiation leak (because its the government that is promoting the use of nuclear power!). Thus,  if you run into folks  who say that they do not frequent Tokai-Village for casual sight-seeing or vegetable shopping, you cannot merely dismiss them as over-reactors.

There is at least one reason, however, that people, especially those from central Ibaraki, might venture to pay a visit to Tokai Mura- that is to celebrate  a thirteen year old boy or girls JU-SAN MAIRI, a rite of passage very common in Kyoto and its environs, but almost completely unknown anywhere else (you can do your own survey). This coming of age ceremony is customarilly celebrated at  temples dedicated to  KOKU-ZO- , a Boddhisatva whose wisdom and goodness are believed to be as vast as the sky (this is a direct translation of the name KOKU-ZO-), and who can bestow generous doses of good fortune, intelligence and  powers of memory on devotees. Tokai Mura has been home to one such temple, the Muramatsuyama Koku-zo- Do-,  since the year 807, and it has also been long considered one of Japans three great Koku-zos (along with those in Aizu, Fukushima Prefecture and Ise, Mie Prefecture). 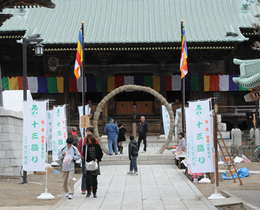 On the 13th of every month this straw ring is set up at the Muramatsuyama Koku-zo Do for people to walk through- its supposed to remove impurities and make you smarter!

Interestingly, it is because the EN NICHI (縁日)- the special day – for the Koku-zo Bosatsu (every deity has its own day of the month) is the 13th, it is at temples where this Bodhisatva is honored that 13 year-olds come to celebrate and pray.

Though in Japan there are rites of passage which are universally celebrated , of which the Shichi-Go-San in November for children aged 3, 5 and 7, and the Coming Of age Day in January for 20 year olds might be familiar to you, the Ju-San Mairi celebration for 13 year olds which began at Kyoto`s Horinji-Temple in Arashiyama, is still mostly observed in the old capital (Kyoto) and its environs, and then, because of the presence of the two important temples, in parts of Ibaraki and Tochigi Prefectures, way out here in Eastern Japan. 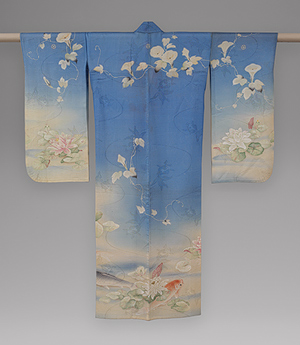 A Ju-San Mairi Kimono on display at New Yorks Metropolitan Museum. Since young girls become WOMEN at around 12 or 13, a long-sleeved unmarried woman`s FURISODE kimono is worn (for the first time) for this celebration

In kyoto, most celebrants and their parents visit the Horin-Ji Temple on April 13th (tomorrow, which is why I am writing this post!), though any time between March 13th and May 13th is acceptable. Girls might be presented their first furisode Kimono and 13 types of sweets may be purchased and then enjoyed after returning home . While at the temple, families pray for the health and happiness of their children and also for a little of the wisdom and merit of the Koku-zo- Boddhisatva to rub off on them. Another famous tradition at Horin-Ji  it that after the 13 year olds have finished their visit and prayed for wisdom, they should never LOOK BACK as they are crossing the Togetsu Bridge to leave the shrine, it is said that as a result of doing so they will lose all the wisdom that they had just gained. 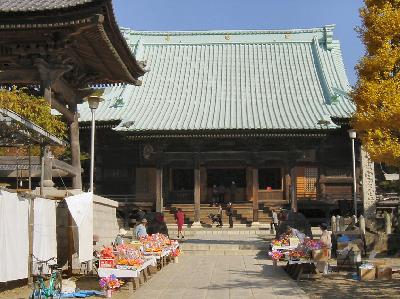 As I have said you do not have to travel to Kyoto to see or celebrate Ju-San mairi ( though you might prefer to!), as the Matsumurayama Koku-zo-do is just about a 90 drive from Tsukuba and easilly accessible by train (the Joban Line). Though it is customary to visit there Ju-San Mairi between March 25 and April 5, you can find kimono clad celebrants on practically any day of the year- they come by the busload !.  Here is how to get there-

I really wonder why the practice of celebrating coming of age at the age of thirteen is not more widespread in Japan. Not only is that an age where young peoples bodies and minds start to mature,  but  according to eastern thought,it represents the beginning of a new cycle of 12, after having gone through all the signs of the Japanese Zodiac for the first time, only to return to the animal (each sign is an animal) of ones birth year. When I posed this question to several  Japanese friends, they all concurred in saying that in contemporary Japan, 13 year-olds are too busy at school to be bothered with such things.

Still, right here in Ibaraki, you have a chance to witness  this rare custom being observed. After (or before) visiting the Muramatsuyama Koku-zo-Do, you can check out Tokai Mura`s other top attractions- The Atomic Sciences Museum, and the tastelessly named museum (in light of the accident of `99)- Atom World!

If you can`t make it up to Tokai Mura this month, you can watch a video about the JU-SAN MAIRI celebrations at the Muramatsuyama Koku-zo Do here: