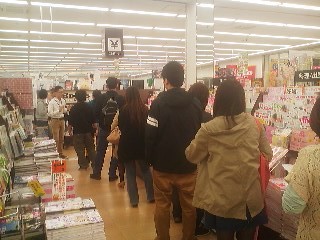 If you were trying to get across Tsukuba by car tonight, you were probably very frustrated. Traffic was terrible! Some intersections were so bottlenecked that it took three green light changes to finally make it through. If you were planning on heading to one of Tsukuba`s over-abundant shopping malls you would have been even more put out- the parking lots were full and you had to wait until someone vacated a spot before you could pull into one. And if you had any shopping in mind, you probably had to wait on lines that were extraordinarilly long!

Sounds like the situation on Japanese New Year`s Eve when families do their  last  minute shopping to prepare for the festival.

But its not the end of December- its the end of March! – so what is going on?

Tonight at midnight, a new 8% consumption tax which will go into effect. People are out doing their last shopping at the 5% rate.

Since the tax hike is supposedly going to be helping pay for the reconstruction of the areas devastated by the Eathquake and Tsunami of 2011, trying to get in some shopping before the new tax takes effect tax seems stingy- and un-patriotic! But apparently many people are  suspicious about what all the additional tax revenues  will actually be used for!

The huge crowds this evening probably mean that the next few days- the first days of the new tax- will be quite slow ( and empty) at the malls and department stores. Paying an extra 3 percent is a small price for the peace and quiet! And the extra money will go to a good cause- maybe……

If you want to be one of the first ones to pay yor new tax- head for a convenience at midnight! 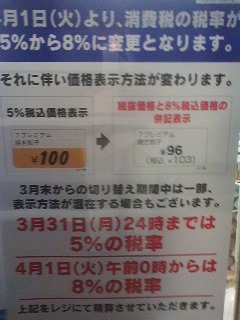 An announcement at a convenience store in Tsukuba informing customers that the consumption tax will be raised to 8% at midnight April 1st.