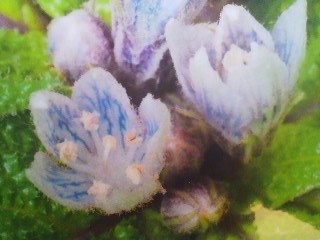 Mandrake Flowers in bloom. Mentioned several times in the bible, and in the works of Shakespeare – the subjects of all sorts of legend (it even plays a role in the Harry Potter series), the roots of these tiny flowers, often look like little humans and contain powerful hallucinogenics and can even cause death- which is probably why they have long been associated in Europe with magic, witchcraft and the casting of spells.

There has been plenty of media coverage- in the newspapers, the internet, and even on television. All for some a few flowers hardly bigger than the fingernail on your pinky.

”  According to legend when you pull a mandrake root out of the ground it cries out, and anyone who hears this sound  perishes ! For the first time EVER, one of these plants has flowered at the Tsukuba Botanical Garden. The blooming of mandrake is a rare occurence anywhere in Japan”

” A perennial plant and a member of the nightshade family, the mandrake has been used for medicinal purposes since ancient times. Its root has hallucinegenic powers and contains compounds so powerful that they can in some cases cause death. Many legends arose in association with this plant during the Middle Ages. It even appears in the Harry Potter films.”

I guess it was the last bit of information, the fact that it played a role in the immensly popular (here in Japan as well) fantasy series (both the books and  the movies) that led to all the publicity. 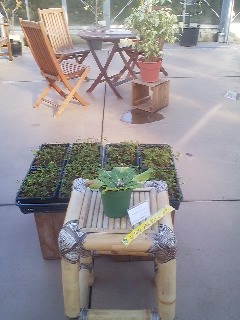 And though I have never seen any of those films (for some reason I am just not interested in the least by the fantasty genre), I still felt that I had to get to the botanical gardens to see the blooming mandrakes (also called mandragora).  “Who knows” ?, I thought .” I might never get the chance again” !

The problem for me though, was finding the time. I have a full schedule this week, and the  flowers would only be in bloom for a few more days- until the 7th, according to the staff at the garden. 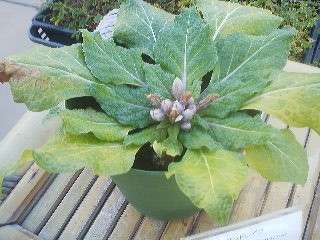 So what I did was drop by for a look, between appointments, on a cold afternoon with punishing winds.

At the entrance I showed my members card- one of the great deals in Japan- 1,000 Yen for a year of free entry, with each admission costing 300 Yen (great savings if you go as often as I do! ), and asked where the mandrakes were.

Given the meterological conditions, I was relieved to hear that they were in a greenhouse !

Walking over at a brisk pace, I noticed that I was not alone. There were others who had obviously come for the mandrakes. Ah, the power of television.!

Fighting the frosty winds we made our way to the glass houses just beyond the central square. I did not even stop to admire the plum tree which had just started to bloom- the wind chill was so painful. 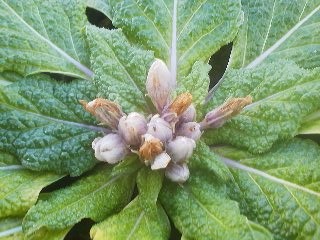 Opening the sliding doors and entering the warmth and calm of the expansive (and fragrant) greenhouse made me wish that I had more time to spend- instead of having to step right back outside again. It would have been nice to sit down in one of the chairs are benches there and read for a while.

But the fact was that I had an appointment in less than fifteen minutes and had come to get a look at the mandrake flowers.

I looked ahead and saw a small table made of bamboo. On the table a much smaller flower pot. In the pot there grew a plant upon which sat several tiny flowers.

The leaves of the plant were yellowing at their tips and the flowers themselves seemed to be merely budding and not blooming.

I looked at them from way up close and then from a distance. I tried every possible angle. I took a sniff- no smell at all ( but the bible mentions their fragrance ! But not of their flowers- of their fruit!)

I took some pictures.

then I had to go. 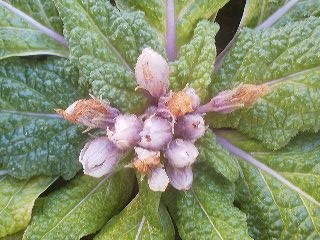 It kind of reminded me of an evening many, many, years ago- when Halley`s comet was visible from Earth (of course I could look up the year right now but I dont want to know how LONG AGO that was!). I had convinced a Thai friend of mine to come with me up a mountain where there would be a telescope (outdoors) for viewing the rare celestial event. Though it was winter, and would be extremely frosty up there, my enthusiasm must have worn off, becuase she agreed to come.

When we got there, there was a group of people crowding around the scope, each taking a turn to have a look.

When it was my friends tum she peered into the eyepiece for a few seconds, then pulled back, straightened up and glared at me with cold-burned cheeks- “You mean that DOT” ? !!!

But despite the fact that she was not very impressed at the moment, and had to suffer a bit to have a look, all these years later she can say to herself (or to anyone else)- ” I saw Halleys comet”!

Well. that is how I felt today, on my way to my next appointment. It had been hard to get there, and what I found was not very impressive looking…..

But, still- I will always be able to say that: