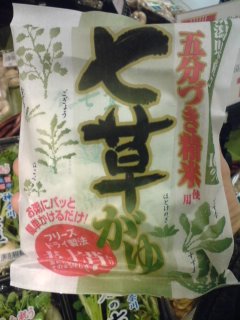 Just when you thought we were through with all the traditional dishes. Just when you’ve decided that you’ve had more than enough of the soba, the O-zoni, and the O-sechi- all the traditional dishes of O-Shogatsu, the Japanese New Year Festival. Just when you find yourself daydreaming about dining at one of Tsukuba’s fine Italian, or French, or Chinese, or Korean restaurants which will be reopening after the long holiday. Just THEN, you realize that tomorrow is January 7th, time to eat the very traditional NANA KUSA GAYU (porridge with the seven herbs of spring) and head off to the supermarket to get ready. 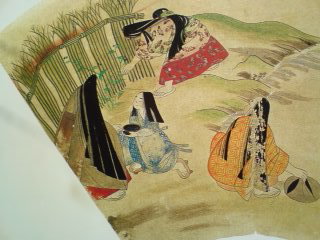 This custom was adopted, along with so many other things Chinese, by the aristocrats of the Heian Court (794-1185), though they changed the date to the 15th. They would gather young plants and put them into a soup (the actual herbs have varied over time and place). In the Kamakura Period (1185-1333) instead of soup, the herbs were cooked in a rice porridge. The date was also changed back to the original Chinese one, the 7th. During the Edo Period (1600-1868), the shogunate recognized and promoted the traditional Chinese sekku, and the custom of eating porridge containing the seven herbs of spring filtered down to the general public. Of course, after the calendar was westernized, in 1873, the porridge came to be eaten on January 7th (which is now the 7th day of the first month).

It was also believed that the porridge soothed the stomach after all the eating and drinking of O-shogatsu, and got the people to eat their greens in a season when, before refrigeration, vegetables were a rarity. 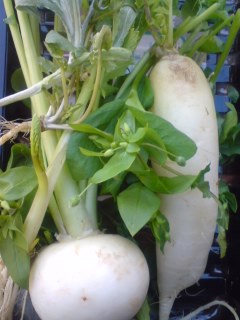 Here are the herbs and their traditional benefits: Gogyo, good for urination; nazuna, good for tired eyes; seri, plenty of vitamins; suzushiro (radish flower), good for sore throats; suzuna, packed with vitamins; otokenoza, a pain killer; and hakobera, good for the teeth! I’m really not sure what these plant names are in English, but it looks like I’ve got a radish and a turnip among my herbs. 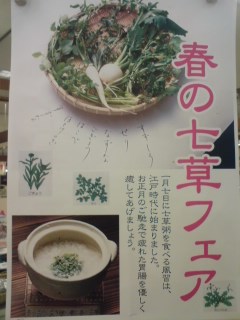 Any supermarket will have nanakusagayu packs available. There is a large variety, some containing fresh herbs and vegetables and others freeze dried. I recommend Seibu department store’s supermarket for the finest selection in Tsukuba. 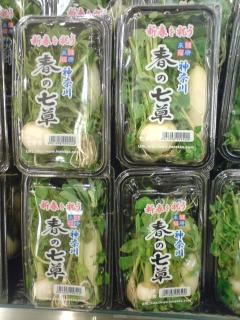 The porridge should be eaten on the morning of the 7th ! Have fun and bon appetit !