New Year`s Decorations Go up In Smoke at the Big Dondo-Yaki (どんど焼き) Bonfire Saturday Morning January 11 (by the Sakura River at the Tsukuba-Tsuchiura Border) 10 January, 2014 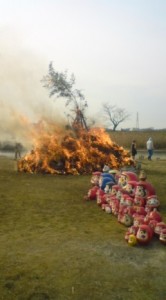 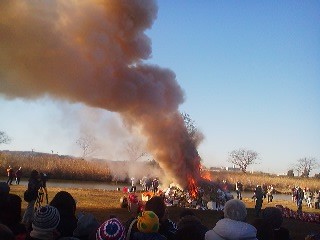 The sun blocked out by a billow of smoke at the Tsuchiura Dondo-Yaki (January 11, 2014)

In Tsukuba, when we want to get rid of anything unneeded or unwanted taking up space in or around our homes, it’s always necessary to consult the City`s GARBAGE SEPARATION MANUAL, which after much bewildered scrutinization might finally reveal when and where certain materials can be disposed of.
However, there are some items for which even that labyrinthine text gives no clue as to  how to deal with. For example, the festive decorations and other sacred objects that Japanese people, as a matter of pure common sense, would never simply throw into the garbage.
What is to be done with last year’s Daruma doll and the New Year’s shimenawa (sacred rope), kado-matsu ( a sort of Japanese Christmas tree in pairs) and other decorations?  The Japanese do not  need to have this information  printed in the Trash Disposal Manual. It is natural for them to take such items to a shrine to be disposed of respectfully, or bring them to a ritual burning ceremony usually called DONDOYAKI ( どんど焼き）in this area (though it is variously called called Sagicho- 左儀長, Dosojin-yaki, Sankuroyaki, Onpe, etc. in other parts of Japan). 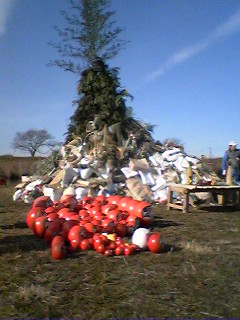 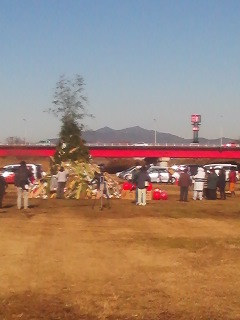 Preparing for the Tsuchiura dondo-Yaki on the banks of the Sakura River (with Mt. Tsukuba in the background)

Traditionally, New Years Decorations and other sacred items have been burned at shrines ( or other set locations)  throughout Japan on January 14th or 15th. It has been ( and still is) considered VERY lucky and healthy to eat mochi rice cakes which have been roasted in these in the embers after these fires have burned out.
Since it  was believed that certain deities would descend at the beginning of the year, attracted to these sacred ropes, bamboos and paper etc., it was at the dondoyaki ceremonies these these spirits were thought to return, along with the smoke, to the heavens.
It is when watching the decorations go up in smoke, warmed by the large bon-fire on what is certainly a very cold January day, that the Japanese have the sense that the O-Shogatsu ( New Year`s) period is over. 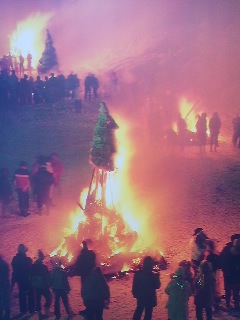 A Dondo-Yaki ceremony in Akita Prefecture

I have also heard that practicioners of Japanese calligraphy (shodo), take their first works of the year ( kakizome), and put them into the pyres. If these works ascend high into the sky with the smoke,it is a sign that their skill will RISE this year.
If you have any  items (straw, wood or paper) that you would like to dispose of with respect, there will be a big dondoyaki bash held on the Tsukuba-Tsuchiura border, by the Gakuen O-hashi Bridge, on The Tsuchiura Gakuen Road (the same place from which the fireworks are launched at the Hanabi Festival). The event will be held on Saturday the 11th, and will begin at 11am. Mochi will be served to the first 200 people who sign up, and registration begins at 9am ( so get there early!).
Don’t put any plastic, ceramic or metal objects in the fire.
See you there! Its quite a spectacle with the huge bonfire and 200 people roasting rice cakes stuck onto the tips of long bamboo poles which bend with the weight ! 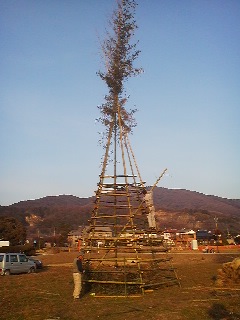 A Dondo-Yaki pyre being prepared at Oda, one of Tsukuba`s old most historical neighborhoods

As you can see from the photos I have uploaded, the pyres are built up around tall evergreen trees- which are usually quite tall. Apparently, In past ages, the direction in which the tree fell  was often considered to be an indicator of the quality of the next harvest.

Even if you don`t believe in its significance for divination, the most thrilling moment of the Dondo-Yaki is still probably the point at which the blazing tree falls over.

I came across this poem by Arakawa Yuko ( 荒川優子) which nicely captures the feeling:

which I try to capture the gist with: 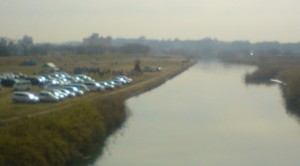 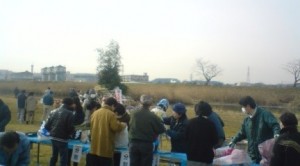 Like airport security, the city office staff sifts carefully through everything that has been brought to be burned, making sure there are no illegal materials 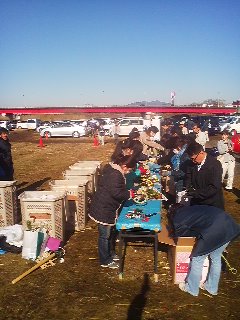 Any wire, plastic or fruit were sorted out and thrown into appropriate waste-bins 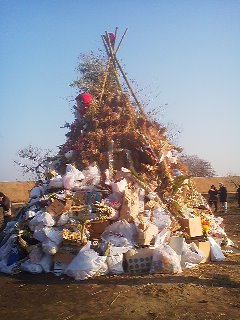 At the Dondoyaki in Tsukuba City`s Oda District, however, plastic bags and other dioxin releasing substances were freely placed onto the pyre 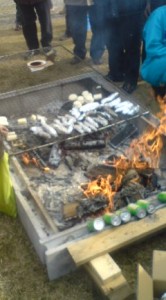 Before the actual DONDOYAKI gets underway peopel grill their KAGAMI-MOCHI and sweet potatoes as well. Lots of people gather round the grill to keep warm! 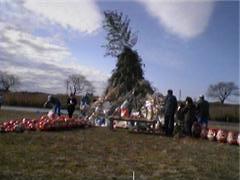 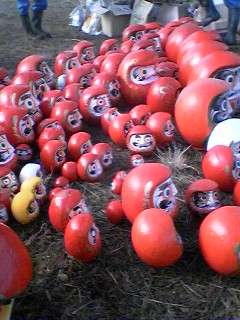 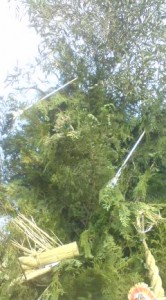 Next week, there will be another Dondoyaki event held in one of Tsukuba`s most historically important areas- Oda (小田)

You can get to Oda by taking the Tsukubus Oda Shuttle, or by bicycle- as the site of the old castle (nothing of the structure now remains) lies along the RINRIN road cycling path. If you go by car, you can go straight down Nishi Odori and keep going straight even when you pass the intersection where you meet higashi Odori (where the McDonalds is). You will then go down a slope and come to a bridge which passes over the Sakura River. Soon you will see a sign (after the first light) which indicates that you c\should turn left to Oda Castle (小田城跡).

Though nothing very much remains of this castle, and the neighborhood itself is one of the quietest in all of Tsukuba (which is not very lively in anyway) this area was between the beginning of the Kamakura Shogunate (1185) to the beginning of the Edo Period (1600) the most important military, cultural and religious center in the whole region. Oda Castle was the ONLY castle in the whole of Japan which was ruled by the same family throughtout that entire period. There was not only a great castle- with about 40 satellite castles spread out over the region in ots hayday- but there were also several great temples on the low mountains to the east of the fortress. Most of these have disappeared without a trace (except for Tojoji- which is well worth a visit).

An especially notable point in Oda`s history is that in the Kamakura Period the aristocrat,  scholar, and Imperial advisor Kitabatake Chikafusa (北畠親房) took refuge at Oda Castle for three years (during the dispute between Japan`s Northern and Southern Courts (1336-1392). It was there ( yes, in what is now Oda, in Tsukuba City) that he wrote his highly influential treatise the JINNO-SHO-TO-KI  in which the writer asserted something which many later would repeat- that Japan is the Land of the Gods, since it had been ruled since time imemorial by the same imperial family. 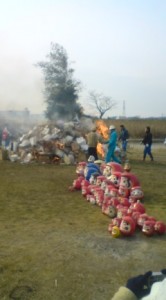 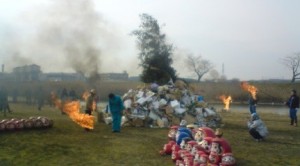 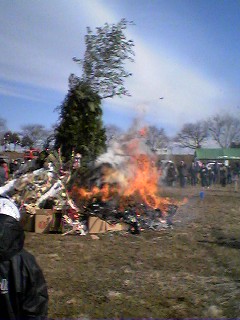 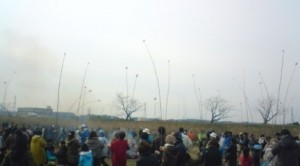 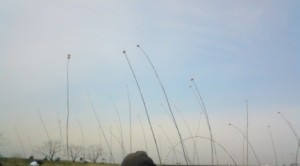 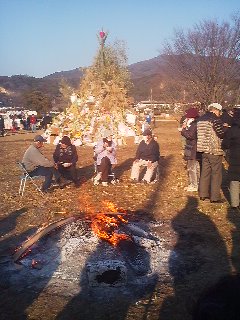 Before the Dondo-yaki fire is lit, residents of Oda, Tsukuba keep warm by a small bon-fire, munching on baked sweet potaoes and sipping pork soup

You might want to combine a trip to the Dondo-yaki with one to see the DEZOME- SHIKI fireman`s Festival which I have written about in my previous post.