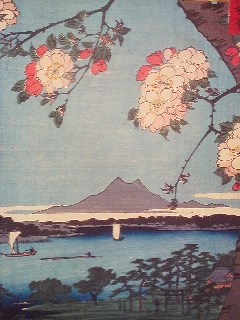 Suijin Shrine and Massaki on the Sumida River (with twin-peaked Mt. Tsukuba looming in the background)- 1856 – one of the ten woodblock prints from Hiroshige Ando`s famous series ONE HUNDRED VIEWS OF EDO in which Mt. Tsukuba is depicted. Hiroshige used poetic licence in this particular print by showing the mountain`s TWIN-PEAKS which would not be ordinarily be distinguishable from that particular place.

At 877 meters, it is neither high nor majestic. But for those of us who live on the vast (by Japanese standards, of course!) plain which surrounds it, the slightly crushed M figure of Mt Tsukuba is like a trusty old friend, always reassuring us of where we are and helping us get our bearings when we are lost. No less important, its forested slopes, besides being an important refuge for wildlife no longer found on the plain below (wild-boar and flying squirrels, in particular)-   put Japan’s seasons on display for us- while on the flatlands below the greenery has been disappearing at a frightening pace and  snow accumulation has become a rare occurrence.

Mt. Tsukuba also carries with it plenty of cultural and historical significance- which is why in this mountainous land of myriad grand peaks this relative HILL is included among the ranks of the One Hundred Famous Mountains of Japan (Hyaku Meizan, 百名山) see:

Most important in this regard , is probably the fact that it has been considered SACRED- in its entirety- since ancient times, and a symbol, because of its twin peaks, of the MALE and the FEMALE- and their interaction.

Because of this, Mt. Tsukuba is frequently mentioned in classical Japanese poetry, even by those who had never actually seen it*.

It is a point of pride among the residents of the villages near it and along its slopes, that Mt. Tsukuba is mentioned 25 times in the MANYOSHU, the oldest (and perhaps greatest) of Japan`s anthologies of classical poetry-  while Mt. Fuji is referred to in only 11 poems ! 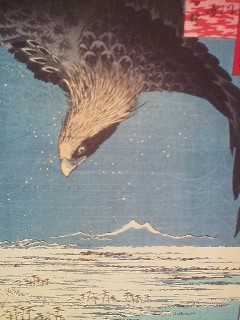 Fukagawa Susaki and Jumantsubo ( with Mt. Tsukuba and bird of prey)- 1857. I carry a postcard of this print with me so that when people ask me where I live I take it out, point to the foot of the mountain, and say “HERE”

It is interesting that even the people who are very familar with (and proud of) these “Mt. Tsukuba poems” in the Manyoshu are not aware of the fact that the same mountain has been depicted in some of Japan`s most famous and influential art works- works which were enthusiatically studied and copied by the great Impressionist and Post- Impressionist painters (Monet, Degas, Van Gogh, etc) – works which have become icons of traditional Japanese culture. 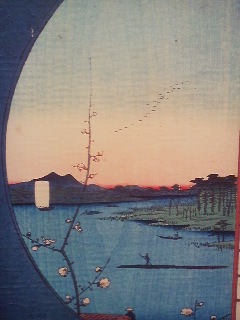 View of the Suijin Shrine, Uchigawa Inlet and Sekiya (as well as Mt. Tsukuba) from Massaki – 1857-8. It is interesting that when I show local residents these prints they DO NOT recognize their familiar mountain and just assume that it is Mt. Fuji

I am thinking specifically (among many others examples) about ten of the works from a set of woodblock prints called MEISHO EDO HYAKKEI (名所江戸百景)- One Hundred Views of Edo (which actually contains 118 views) by one of the greatest names in Japanese art- HIROSHIGE (1797-1858). In the same series Mt. Fuji appears 19 times.

This series of prints was created in the mid-19th century, and represents some of the artists final (and most impressive) works. 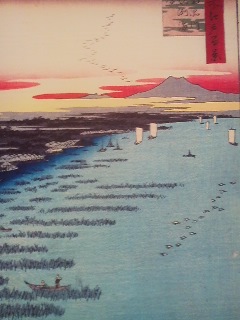 If you are wondering why Mt. Tsukuba should appear in print depicting o Edo (Tokyo`s former name) you should try to imagine what it was like in past ages when buildings were lower and the air was much cleaner!

From Edo (which was among the largest cities in the world in the 19th century), Mt. Tsukuba was often clearly visible- and just as it helps modern day Tsukubans find their bearings, for the residents of  that great city the rule was: Mt. Fuji in the west and Mt. Tsukuba in the east ! 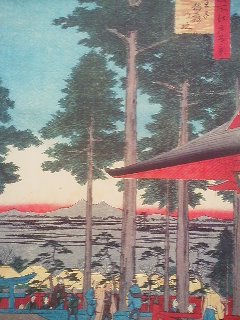 Mt. Tsukuba also had the reputation of glowing a deep purple in the evening- in fact  its nickname to this day is SHIHO (紫峰), Purple Mountain**- and you can how in his prints Hiroshige DOES always make sure to make the mountain instantly recognizeable by emphasizing its twin-peaked M shape (even when this shape could not actually have been discernable from that particular angle) as well as his use of  the color purple (more like a shade of gray).

This always provided a clear contrast with Hiroshige`s depiction of Mt. Fuji- conical and white. 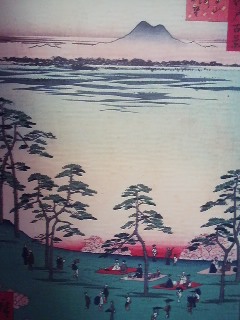 View to the north from Asukayama -1856

The popularity of Hiroshige`s prints is still great. You can find them not only adorning the walls ( I have a few hanging in my own home) but also on the kitchy JAPANALIA motifed T-shirts, coffee mugs and sake cups sold at souvenir shops at Narita  Airport or other places heavily frequented by foreigners.

As for me, I usually carry a postcard of one of Hiroshige`s works along with me wherever i go (the one with the hawk and Mt. Tsukuba) so that when anyone asks me where I lived I can take it out and point to the base of the mountain in the postcard and say; “Right here”. 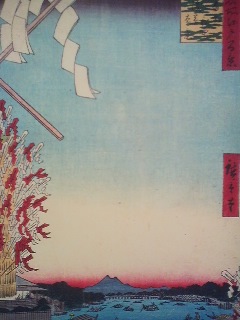 In Boats at Ryogoku with a Distant View of Asakusa (and Mt. Tsukuba) 1857

I was surprised  to find that one of the best quality first edition sets of the 100 Famous Views of Edo is housed at the Brooklyn Museum in New York- my hometown.

I make it a point to get to Brooklyn if ever I`m back in New York in spring. The Cherry blossom viewing to be done there is one of the most interesting in the world- where else can you enjoy HANAMI surrounded by among other ethnic groups- hundreds of Hassidic Jews AND devout Muslims- all decked out in their traditional regalia.

The museum never displays the entire series at once, but if I see one depicting mount Tsukuba on display, I lose all sense of modesty and propriety,  and just cant resist  revealing to the other visitors, to anyone willing to listen- that- THAT`S WHERE I LIVE! 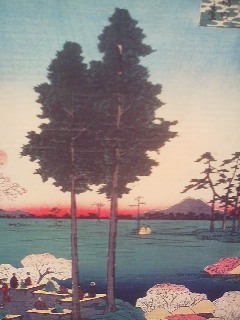 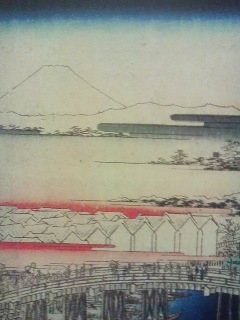 From the same series, a depiction of Mt. Fuji- in white, as opposed to purple 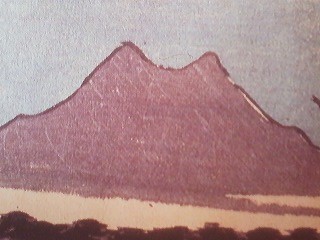 A detail- note the color used to depict what is nicknamed SHIHO- (紫峰)- Purple Mountain. While most people attribute this moniker to the color the mountain actually turns when struck by the rays of the setting sun,  it is my theory that the true origin of the nickname is the Purple Mountain (紫金山) near Nanjing, China. That low, twin-peaked mountain, looks just like Mt. Tsukuba and is often referred to in classical Chinese poetry.

* I have written more on Mt. Tsukuba in classical Japanese poetry in these articles:

Oh ! And I almost forgot ! You can view the complete MEISHO EDO HYAKKEI print series here: