Soul of Meiji- an Exhibiton of Everday Objects from and Photographs of the Japan of 130 years ago from the Peabody Museum of Salem E.S. Morse Collection ( Thru Dec. 8th) 5 December, 2013 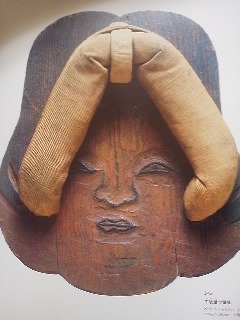 One of the clever and beautiful signboards- this one for a Meiji late 19th century GETA (wooden clog) Shop- on display as part of the SOUL OF MEIJI exhibition at the Edo Tokyo Museum in Ryogoku, Tokyo

I had long been familiar with the name -Edward Sylvester Morse- in connection with ancient Japanese shell mounds (KAIZUKA), and the establishment, in the late 19th century, of the field of archaeology in Japan. It was Dr. Morse (1838-1925), an American zoologist, who organized the  first scientific excavations ever carried out in this country, at a site which he himself happened to spot- now known as the O-mori Shell Mound (O-MORI KAIZUKA) on his third day in Japan- June 19th 1877.

In fact, I often tell Morse`s story when I give tours of Tsukuba- which I like to do chronologically, beginning with the area`s oldest remains and then working up to the present. That means I often start out at the 3,000 year old Asahidai Kaizuka Shell Mound (in Kamizakai Tsukuba). There we can trample over and sift through thousands of scattered sea shells (despite the fact that Tsukuba is an hour`s drive from the sea), pottery fragments and animal bones discarded by this area`s ancient inhabitants in what is now an open field.

There, I recount how Morse had come to Japan in search of rare shellfish, in order to further his studies in that field.He had planned to stay for three months.

He arrived at the port of Yokohama, and after resting for a couple of days got on the brand new train (the first ever in Japan) which connected Yokohama and Shimbashi in Tokyo.

Gazing out the window, at one point something that caught his eye- along the tracks, there appeared to be thousands of shells embedded in the soil.

He had seen similar SHELL MIDDENS back in the United States, and knew that he had found something special and would have to come back.

After arriving in Tokyo, he went for an interview, and was hired as a researcher and university lecturer. He was also given permissiom to carry out an excavation at the site he had noticed. All in all it was quite a day for Dr. Morse. It was significant for Japan, as well.

The first systematic study of a Japanese shell mound was carried out (there are now more than 2,000 of them which have been identified from Hokkaido in the north to Okinawa in the south)- giving detailed information about what life was like in what is now known as the Jomon Period (10,000 BC- 300 AD). 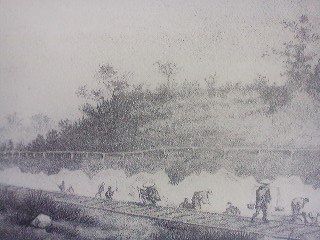 A sketch by Dr. Morse of the excavations which he supervised at the O-mori Shell Mound in O-mori, Tokyo. Morse noticed the shells embedded in the soil along one segment of the then brand new Yokohama to Tokyo Railway Line (the first line in Japan)

Interestingly, and less known to the Japanese than his work at O-mori Kaizuka, is the fact that the term JOMON (縄文) itself, used to designated a very long period of Japan`s ancient history, derives from Morse`s writings on the O-mori Shell mound. He described the designs on the pottery discovered there as ROPE PATTERN- which his students translated directly into Japanese as JO- (rope), Mon (character or pattern).

Before the scientific investigation of these shell mounds and an understanding of how sea levels had been much higher thousands of years ago, the Japanese had attributed the existence of piles of seashells doeznes of miles from the seashore to ancient giants, whose arms stretched all the way to the sea to gather shell. 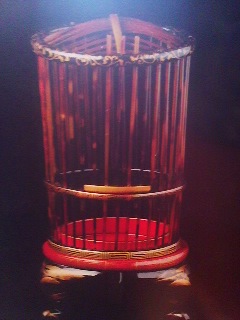 Naturally, when I came upon a two-volume set of books called the Peabody Museum of Salem E.S Morse Collection at the library, I imagined before opening it that it would contain photos of specimens taken from his excavations at O-mori.

Well… there were…. but only about ten- and very small ones at that! To my great surprise (and delight) the book was instead filled with pictures of a fantastic array of everyday and festive items used by ordinary Japanese during the Meiji Period, as well as reproductions of photos taken at that time.

It saddend me to think that this magnificent collection of mundane objects was housed so far away- in remote Salem, Massachusetts – a place I hardly imagined ever getting to.

But then, one day many years later, as if by miracle, I saw a poster which announced that this collection that I had long LONGED to see had in fact COME TO ME! It would back at the Edo Tokyo Museum (very conveniently reached from Tsukuba) through December 8th 2013. 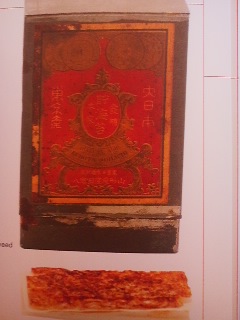 One thing I learned at the exhibition was that if you keep NORI for 130 years, it turns red!

I was finally able to bet to the exhibiton (lucky for me that it IS so conveniently reached form Tsukuba) and can say that I was not disappointed. So many objects which once belonged to ORDINARY people, things which no one here in Japan ever thought of keeping, let alone have put on display in a museum, now seem so special……. and you will not find another collection of simililar items of such quality anywhere in Japan!

The exhibition was also eye-opening for me in terms of learnign about Dr. Morse`s life in Japan (he ended up spending 4 years here) and his love of this country and his culture (I found out that he published a 3,000 page diary called Japan Day by Day- which I will have to get around to reading some day).

He was a fine sketch artist and it seems that he drew everything that interested him- which it seems was just about everything in Japan. 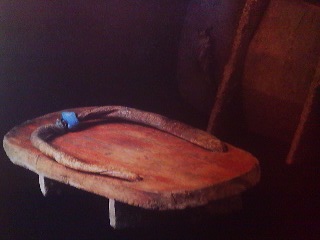 One curious thing for me about this exhibiton was how the curators edited the Morse Collection, and used quotations from his diaries which praise Japan`s good qualities to make this showing a kind of FEEL GOOD ABOUT YOUR COUNTRY and CULTURE event.

Interspersed between the beautifully conceived and constructed everyday items and photographs of healthy and happy people were posters with Morse`s words:

The Cleanliness of the Japanese is amazing

Again I must repeat that Japan is a paradise for children

A marked characteristic of the Japanese is their love of nature

all reinforcing for the Japanese, especially the older generation, their image of themselves and their country.

This is all fine, and everyone (it was very crowded when I was there) seemed to be enjoying the show greatly and feeling good- or at least nostalgic for a good ol` Japan. 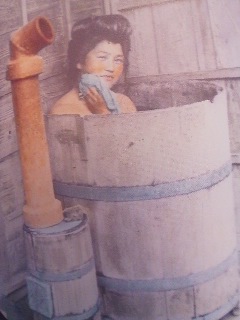 This photograph of a woman in an OFURO was accompanied by a quotation from Morse: It is a wonder the Japanese don`t scald themselves to death in their baths !

I realized, however, that in order to create such an atmosphere the curators had to edit out a large portion of the actual Morse Collection- especially photos of the old Pleasure Quarters, but more strikingly the Ainu artifacts and photos from the Morse Collection-  which would have been dis-jarring to many, a mood spoiler. 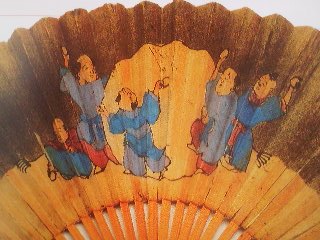 Entering the exhibition is a large poster of very happy and healthy children (for some this was THE most impressive item in the show) and then a few posters and display cases related to the O-mori Shell Mound.

After that it is like entering the Japan of the late 19th century. If you concentrated you could almost visualize the people who had used these items- hear their voices, small the air……

The most surprising displays for most are probably the FOODS which Morse collected- sheets of NORI seaweed, a slab of dried bonito, candy- all more than 130 years old. 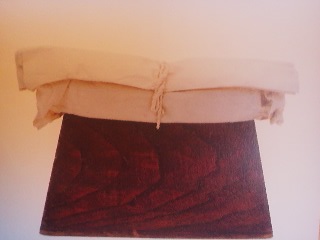 A pillow- Dr. Morse apparently tried using one of these for a short nap and found it more comfortable than it looks.

But for me the most striking section was that of the SHOP SIGNs- each cleverly designed to represent the type of store that it touted.

Also unique were the various flower vases made of woven bamboo. These were made to look like a dragonfly, a grasshopper, a mushroom…….. 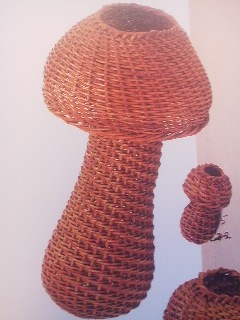 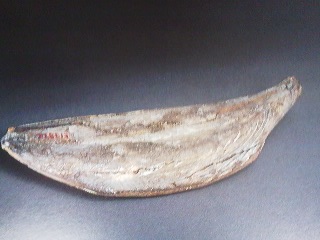 I could not help but wonder, wandering through the show, how Morse could have amassed such a collection. I guessed that he must have been quite well off.

Reading the catalogue to the exhibition I learned that he was not. He was often able to acquire these objects by merely expressing interest in the- they must have been tickled pink by the idea of having them put in a museum somewhere in a far-off land.

Other pieces, including many of the sign-boards (which I enjoyed so much) were collected by his supporters after he had already left Japan. 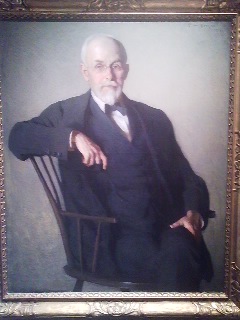 A portrait of Dr. Morse in his later years

This exhibition will be closing on Sunday evening…… so if you don`t want to have to travel to Salem, Mass. to see it, take the TX to Akihabara, transfer to the Sobu Line, take it for two stops and get out at Ryogoku.

The Museum is a 5 minute walk from the station.

Have a lok at its English language web-site here: 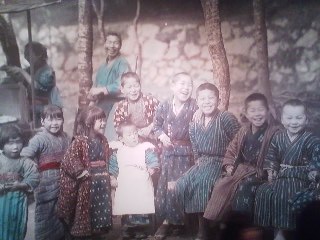 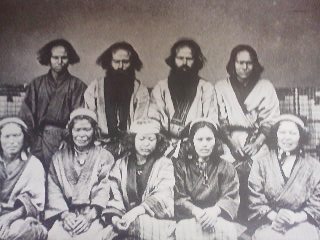 Interstingly, the curators did not include, or even mention, the photographs of the Ainu people which are part of the morse Collection 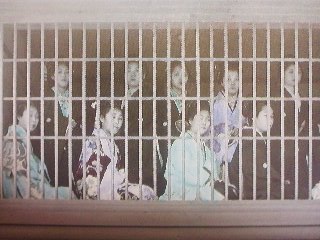 The photos of the old PLEASURE QUARTERS were also, for some reason, not included in the current exhibition ( though they are a part of the Morse Collection at the Peabody Museum)