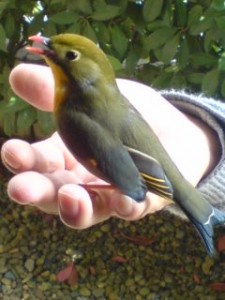 The large windows gave us fine noon-time views of Mt. Tsukuba, the chain of smaller mountains to its south(especially, Mt. Hokkyo-Zan) and the rustic scenery of Tsukuba’s Hojo District. Since the year is coming to an end, I was enjoying the first of many BONENKAI, end-of-the-year parties, that I have coming up this month. Caught up in a lively discussion on the different types of OZONI (a kind of New Year’s soup) eaten in the various parts of Japan, my friends and I were just about to dig into lunch.

Suddenly, I caught a glimpse of a dark streak out of the corner of my eye, and then there was a resounding THUMP on one of the window panes. I cried out with concern that a bird had just hit the window. Tiny feathers, swirling lightly at the scene, confirmed my feeling. Rushing over to the scene, we all pressed up to the glass to see what kind of a bird it was and if it was ok. Unfortunately ,It seems that its always the rarer birds that have these sorts of accidents (almost never sparrows or starlings) and before spotting the unlucky little fella, I assumed the worst- that it had broken its neck.

At first there was no sign of it, but after opening the window and sticking my head out, I spotted it. It took a second for my surprise to register. It was a red-billed leiothrix (ソウシチョウ, soshicho)! A bird native to China and a very popular cage bird, which over the past twenty years has been breeding prolifically in the forests of Mt Tsukuba. It is also one of the prettiest birds you can see in Japan (or anywhere else for that matter). 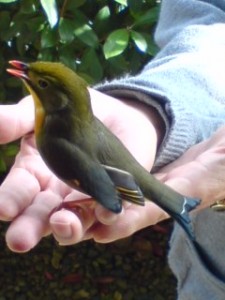 The soshicho was first brought over to Japan from China in the Edo Period (1600-1868), and it was prized as a singing cage-bird. Overseas Chinese took it with them wherever they settled and apparently after the great Chinatown Fire of Honolulu, these birds escaped into the wilds of Hawaii where they now breed (to the detriment of Hawaii’s native birds — the soshicho are blamed for carrying a form of malaria which decimated local species).

It was the Chinese community of Kobe of the 1930s whose soshicho first went wild in the forests of Mt Rokko. This colony did not survive, however (though foreign birdwatchers in Kobe at that time called the bird the Japanese robin).

Interestingly, the event which led to the firm establishment of these birds in Japan (and especially Mt Tsukuba) was the normalization of relations between Japan and the People’s Republic of China in the 1970s. By the 80s , most pet shops in Japan were carrying these lovely birds. They were cheap and easy to care for. It is said that the birds were so cheap that they weren’t worth the feed they ate, and unscrupulous pet dealers just released them into the wild to save money. Some of the birds made it to the forests of Mt Tsukuba, and have thrived there ever since. Though introduced species usually have a negative effect on populations of native species (as in the Hawaiian case), ornithological studies have shown that this has not happened with the red-billed leiothrix in Ibaraki.

Our party crasher was certainly dazed. So much so that we could pick it up in our hands. Soon though, he seemed to have recovered well enough, and he jumped out of my hand into the bushes. When we checked later he was gone, and we assumed that he was all right, back in the windowless, glassless confines of the Mt Tsukuba woods.