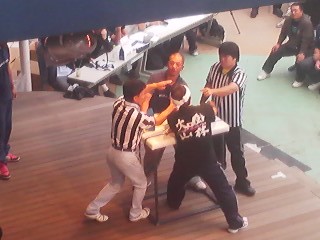 Arm wrestling (Arm Sumo) championships at Lala Garden- on Culture Day, November 3rd 2013- like a sumo match, much time is spent building up tension before each bout- which then, most often is over in a flash

On weekends or holidays, there are almost always concerts of some sort held at Japan`s (and Tsukuba`s) ever proliferating shopping malls.The larger malls usually feature professional acts, sometimes well known- I  once actually saw former (and much slimmed down) Hawaiian-born sumo wrestler Konishiki performing children`s songs at the Iias Mall in Tsukuba.

Smaller shopping centers, like Lala Garden in Tsukuba`s Matsushiro area ( about 1 km west of the TX Terminal along the Tsuchiura Gakuen Line) cannot afford, however, to bring in any big name acts.

On Lala`s outdoor stage you can usually find local housewives, teen-agers or kids, performing hip-hop, hula or belly-dances with their hobby-circle groups. There are also amatuer singers- sometimes strumming on guitars and sometimes accompanied by Karaoke machines. There are also monkey trainer shows ( which can be very depressing).

It has always seems to me that such events would DRIVE AWAY customers (even little kids seem to sense the sadness of the monkey shows), but I guess the management feels that by attracting the few friends and relatives of the performers who actually come to see these shows they are doing something good for business. 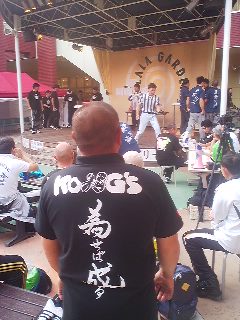 The other day I had to do some food shopping- with three kids , no matter how much food you buy one day, its seems that you always have to head back to the supermarket again the very next day ( I have truly come to learn the meaning of EATING US OUT OF HOUE AND HOME).

Since Lala Garden is a ten minute walk from where I now live, that`s where I set out for, walking past parking lots which I remember not long ago being rice fields which in summers were the feeding ground of elegant groups of egrets (shirasagi).

There were a lot of parked cars, and I suddenly remembered that it was Culture Day in Japan. It then came to me that there would be some sort of CULTURAL event or events being held on the stage- maybe some music or dancing perhaps ( I hoped it was not a monkey show!) 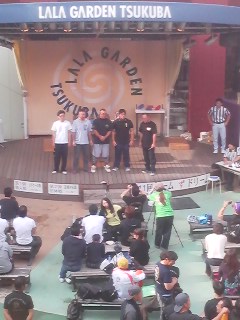 Thinking of making my way to the supermarket, I approached the inner courtyard of the mall, where the stage is located I found a large crowd had gathered. It was like hitting a traffic jam.

And an unusual crowd it was- QUITE different from Lala`s usual clientele. Thick necks, shaved heads, broad shoulders, protruding bellies, black clothes…….. I thought I had stumbled upon a gathering of right-wing extremists (UYOKU) or a gangster (YAKUZA) convention.

Stopped in my tracks and staring, I also noticed that in most of these men ONE ARM was much larger, much more muscular than the other!

Then, looking up at the stage, I saw two men in referee shirts and a sign reading

How is that for a chance of pace.

I stayed and watch for a bit (though like a parent bird I had to rush back to feed my hungry kids!) and realized how much like SUMO the arm wrestling event actually was. Lots of time getting set…..tensing building until the referee calls for the start….. and then its all over in a flash. The longest bouts ( and there were few long ones) lasting less than a minute.

The explosion of energy, effort, and concentration in that short time, however,was intense- even frightening.

How odd I thought, to have an arm wrestling competition on Culture Day- but I guess the management of Lala Garden thought it might be profitable to have all those large-men (with their big appetites) come from all over Japan (with their supporters) to their mall (and its restaurants).

I`m not sure who won it all in the end (and I really don`t care)- in fact I don`t even know why I am writing about this event at all.

I suppose it is just to say that  here in our little city of Tsukuba, smack in the middle of the Ibaraki countryside- you NEVER can tell WHAT you are going to run into on any given day!

I have written about another interesting chance encounter in Tsukuba here: