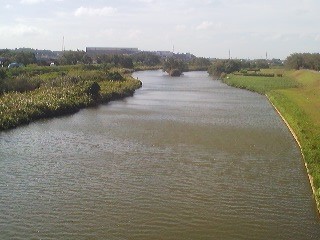 The Aeon Tsuchiura Shopping Mall, one of a whole slew of nearly identical malls to have opened in the Tsukuba area in recent years (all within a 10-15 minute drive from Tsukuba Center) was built on the banks of the Sakura River- just near the spot from which the fireworks are  launched during the annual All-Japan Hanabi Competition held each October. As part of itslease for the land on which it sits Aeon has agreed to stay closed on the day of the event- but only for one day a year. A second closing due to a rescheduling of the fireworks would mean that Tsuchiura City would have to pay compensation

The vote is in and the results are unanimous- this year`s (2013) Tsuchiura All-Japan Fireworks Competiton, usually an unforgettable pyrotechnic experience, was a flop, a disappointment- a complete disaster. It can be said with confidence that this was the worst one EVER ! – because in previous years it has always been so satisfying.

What happened?, As usual, there was the convergance upon Tsuchiura of all the great firework artists of Japan, as well as hundreds of thousands of enthusiastic viewers who were looking forward to seeing their latest creations. The one thing that didn`t show up, though, was the appropriate weather.

It was raining (it had been all day), low clouds hung in the overcast sky, and  what`s more- there was no wind, meaning that the smoke of one burst lingered in the air obscuring the next ones.

So no matter how state-of-the-art the fireworks, or how well-concieved or finely put together they were, they could NOT be appreciated- for the simple reason that they could not be seen!

Why, you may ask was the event held on such a day? Couldn`t it have been postponed to the next day or the follwing weekend. It had happened  several times before.

In fact, when I woke up in the morning and had a look at the weather, I completely put the idea of the fireworks competition out of my mind. I was certain it would be rained out, as was my son`s Sports Festival (undo-kai), which had been scheduled for the same day.

The rain kept up for the rest of the daym so I didn`t give the fireworks a second thought.

Then, at 7 pm (or even before) I heard blasts off in the distance. I said to myself- ‘You have got to be kidding! They are going ahead with the fireworks’?

But it was so cold and miserable that I couldn`t picture it. I turned on the TV, which had, as it always does, live coverage of the event. As could be expected, the announcers were at a complete loss! How could they describe wht they could not see! Absolutely ridiculous!

In the subsequent days, I  heard the reports of friend and acquaintances who actually went to the banks of the Sakura River (the newspaper said 500.000 people watched)- and all the accounts were the same: the fireworks could not be seen.

Those who who paid for parking or for a reserved seat were naturally the most chagrined.

Making the situation even more absurd was the fact that the event is a COMPETITION and prizes, in various categories were given! How could the works have been judged if they could not be properly seen??

I asked someone at the Tsuchiura Tourist Association that question and they answered (in a rambling stressed out kind of way) that the prizes were awarded to the TRADITIONAL fireworks makers- in other words, the same makers who usually win the prizes!

In other words- this year, the most important venue for Japan`s top firework artists to show off their skills was a complete waste of time and money for most of those who participated.

But let`s get back to the question of why the competition was not postponed until better weather?

Well, this is what I was told.

The Aeon Shopping Mall, one of the many generic malls which have sprung up in the Tsukuba area in recent years ( all within a short distance of Tsukuba Center) was built on a tract of land along the Sakura River just near the spot at which the fireworks for the annual competition have been traditionally launched

During the negotiations for the leasing of that particular site, Tsuchiura City officials warned that on the day of the annual fireworks event, the firework launchings just near the mall would pose a danger to the customers. Insisting, however, on building the mall on that spot, Aeon agreed to close down the mall for one day each year on the day of the event.

The only problem is that they did not agree to close down for two days- and if the event were to be rained out and rescheduled any year- the mall would have to close for a whole day again. And that day would be a weekend day as well. If that did happen they would have to be compensated.

Unfortuantely Tsuchiura City is not in the financial position to be compensating Aeon for a day of lost business.

And that is why this year- and in future years- the show will go on: RAIN OR SHINE!

Just another way all these new shopping malls are affecting our lives!