Locusts (INAGO 稲子)- Once popular as a food in Japan, can still be found at stores- and occassionally at the table! 28 October, 2013 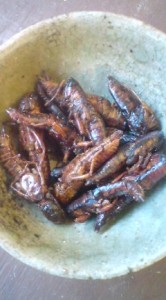 My jaws, lips and tongue froze. Keeping them still, I tilted my head down and lowered my face to get a better look at what I was eating.’ Hey, these aren`t shrimp…. they`re…………………. GRASSHOPPERS ‘, I screamed to myself.

However, just at that moment of panic, a sweet and rich flavor began to spread through my mouth, and slowly, cautiously, I started chewing again. Not bad at all. Good, even ! …….for bugs that is! I popped another into my mouth.

This is what happened years ago, at an Izakaya ( Japanese style pub) in what was then Yatabe town, now part of Tsukuba City. I had been invited to the place, which was a favorite haunt of my friend Sekine-San for a private BO-NENKAI (end-of-the-year-party). With plenty of delicious Sake and excited conversation ( our shared passion is baseball!), I hadnt checked carefully before putting my chop-sticks into a dish which had been placed in front of me. And its lucky for that, since I might never have tried what was there if I HAD known what it was- Inago tsukudani (稲子佃煮)-locusts boiled in soy sauce and sugar!

That was my first gastronomic encounter with these insects which had long been a part of the Japanese diet not only because they were a vital nutritional supplement ( which they were, with plenty of protein, vitamins and minerals)- but also for their deep, savory flavor and distinctively crunchy texture. 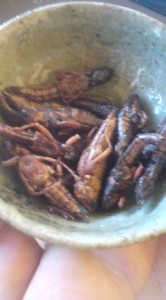 It is only natural, you could say, that the Japanese made locusts a part their diet. After the widespread acceptance of Buddhist precepts, four-legged animals were generally not eaten. There was no use of dairy products, either. The nutritious and tasty bugs could be caught easilly by hand ( even by children) in the rice fields (in fact, the Japanese name INAGO means CHILDREN OF THE RICE FIELDS). Doing this was not only a fun way of catching good food- it was also an important way of removing pests! (Have you ever heard the sound of a flock of locusts munching on the crops? Unforgettable. Like walking into a silkworm shed- munch, munch,munch….).

There are records of INAGO-eating dating from as far back as the Heian Period ( though surely the custom began much earlier), and INAGO are also mentioned in the important culinary guides of the Edo Period (indicating that eating locusts was not restricted to the countryside but was also common in the big city).

The ancient tradition of gathering and eating of these relatives of the grasshopper almost came to an abrupt end after WWII- with the introduction of the pesticides DDT and BHC. For many post-war years there were no locusts in the fields to be gathered. The INAGO INDUSTRY (which involved no small amount of money) ground to a halt.

Fortunately, by the 1970`s the locusts began to return to the rice fields, and with them there was a veritable  inago harvesting rennaissance.

If you speak to anyone who grew up in rural Japan in the 1970`s, you will be surprised to hear ( if you ask) how there were school events in which all the kids would be sent out to the fields in autumn to catch inago with their bare hands. The only equipment provided was a special sack into which the live insects could be put into, but from which they could not escape.

As you can imagine, most have fond memories of these hunting-gathering events. They were definitely more fun than classes.

scouring forgotten texts in the library,I have found that the individual student record for one day of locust catching was 17 kilograms, by a student at Miyagi Prefecture`s Tajiri Junior High School in 1974. Now that`s alot of locusts!

Another thing that surprised me when I heard it was that many schools took the inago gathered by students and sold them to dealers who would then send them off to processing plants. The money earned would be used to supplement the then meager school budgets. Hundreds of thousands of Yen in profits could be made. 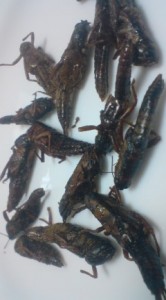 To make tsukudani, the most popular dish made with inago, the freshly caught locusts are fasted overnight to let their stomachs clear. Then they are boiled in water for 3 or 4 minutes. After cooling, they should be dried in the sun ( if the weather permits) for a day or two. Then they can be boiled in soy sauce and sugar. A common ratio would be  4oo grams of sugar and 300 grams of soy sauce for every kilo of inago. Sake and mirin ( sweet sake) could also be added. 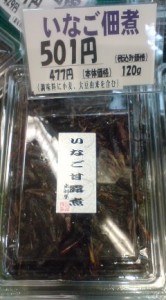 Inago tsukudani on sale at the Seibu Department Store in Tsukuba

Do not imagine that inago is a commonly eaten dish anymore. It isn`t ( though so many kilograms are still consumed each year that they have to be imported from China and Korea to meet demand). I have only been served it a handful of times since my first experience with it. And now schools do not sent the kids out to gather them up. This is done by people hired by dealers working for the tsukudani makers.

Still, you CAN find inago tsukudani at almost any department store, and occassionally as part of a meal at someones home.

If you do happen to find a dish of locusts placed in front of you- dont be afraid- go for it! Tastes like chicken. Only crunchier ! 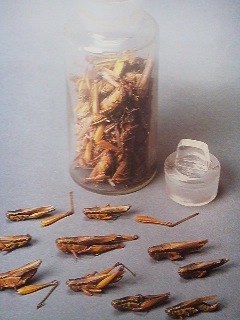 Inago collected by E.S. Morse in 1877 which are on display in Salem Mass.