In Japan, it doesn`t have to be Halloween for a good GHOST EXPERIENCE! 30 October, 2013 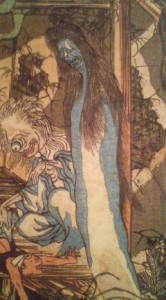 It was early on a Sunday morning. Very early. Five-thirty, in fact. When the door-bell first rang, the slumbering Mr. and Mrs. T, who reside in Tsukuba`s Kukizaki district, both thought they were dreaming. When it chimed again and again, it was finally Mrs. T who reluctantly got out of bed, put on slippers and robe, and went over to the intercom to see just who the heck it was.

‘Donata desu ka? (who is it?)’, she asked with genuine curiosity. ‘Yamomoto desu (Its Yamamoto),’ said the male voice that  answered.

But since Mrs. T was closely acquainted with more than a few people with the family name Yamamoto, one of the most common in Japan, she still could not figure out who it was.

‘Doko no Yamamoto ( Which Yamamoto) ? ‘, she asked with some irritation.

‘Katsushika no Yamamoto ( the Yamamoto from Katsushika, a part of Tokyo`s Shita Machi district)`, he answered.

And she realized immediately who it was. One of her husbands regular golf partners.

Though a bit relieved, the situation was still puzzling- she was unaware of any golf appointement her husband had for that day, and anyway, even if he did what was Mr. Yamamoto doing there so early?

Half asleep and freezing, she let all her doubts pass, by passing off the situation to her husband. She called up to him-‘ ANATA ( honey) ! Its Yamamoto-San! ‘

Grumbling, maybe even cursing under his breath, Mr. T went downstairs and opened the front door.

Nobody there. He stepped outside into the cold and dark. Nobody out front either. And no cars parked out on the street.  Strange.

He went back inside for his cell phone and gave ol` Yamamoto a call. No answer.

Bizarre. But not  enough o as to keep him from heading back into bed and getting back to finsh that good Sunday sleep.

Later in the afternoon, the couple remembered what had happened a few hours earlier in the day ( though it did seem like that had been ages ago), and they decided to give Mr. Yamamoto of Katsushika another call.

This time they got through. Not to Mr. Yamamoto, but to his wife. What they heard from her sent a chill down their spine-

You guessed it. Yamamoto-San, Mr. T`s long time golf partner, had passed away in the wee hours of Sunday morning.

Just another typica,( true)l ghost story that one is likely to hear at any time of year in Tsukuba (or anywhere else in Japan, for that matter).

I heard this one a few months back from Mrs. T herself. Though one other woman at our little lunch gathering gasped in surprise at the story, another woman, Mrs. Sato, was nonchalant and said-“oh yeah. A similar thing happened to me.”

I have been saving this little story for Halloween. But as I have already mentioned, it is not the only one of its sort that has come to my ears. In fact living in Japan, I hear true stories of the supernatural on a regular basis. 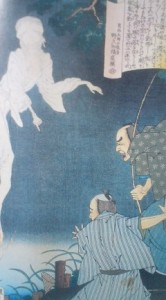 Im saving some of the other CHILLING stories for future Halloweens! Make sure to check for them! 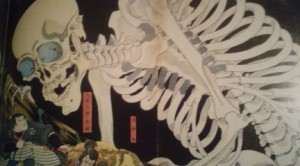 Musings on Halloween in Japan

I find the growing popularity in Japan of American style Halloween with all its accompanying paraphanalia extremely IRONIC. If people thought about this festival more deeply, I am sure that more than a few Japanese would find it offensive.

This is because  Halloween as it is now celebrated in the U.S. can be seen as a kind of PARODY of a system beliefs which are in fact  central components of Japanese culture-specifically its seems to be making fun of  Japanese ancestor worship, and the important O-Bon festival in particular.

The Japanese have traditionally  believed that during the O-Bon period ( which is usually held in mid-August), the spirits of ancestors return to their  native homes( guided by lanterns lit in front of each home). The living then proceed to entertain these spirits for a few days- with what are similar to tricks and treats- food and entertainment.

Halloween is an obvious spoof of these customs.Scary yet funny lanterns are carved out of pumpkins to attract the ghosts (little kids dressed in scary costumes) The ghosts are then given food. Once they have gotten their treats, the ghosts go away!

Though the distant roots of America`s Halloween customs remain obscure, it seems clear that they are a continuation, in mock form, of ancient beliefs in spirits which come back to visit this world who need to be fed. Naturally, the church did their best to suppress such beliefs and customs. Their great popularity, however, made them difficult to wipe out and as the centuries have gone by they still survive, in VERY distorted form.

In Japan, however, even today many DO believe that their ancestral spirits come home for some nourishment, company and consolation- and thats not something we should make fun of, is it ? 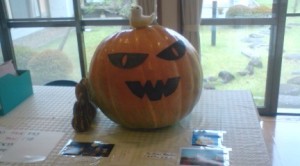 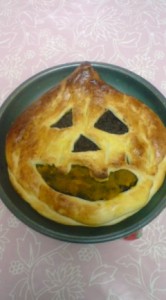 And for those of you who would like some creepy music for the occassion- I once wrote a song ( along with Ascelin Gordon and Tom Debor) called KANASHIBARI. It has been recorded by both Xenophonia and The TenGooz.Listen here: