Its the Turn of the YABURAN (ヤブラン)- Liriope platyphylla – to be the Glowing Stars of Tsukuba`s Dark and Shadowy Spaces 5 September, 2013 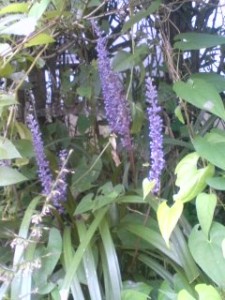 YABURAN in my old front yard in Konda, Tsukuba 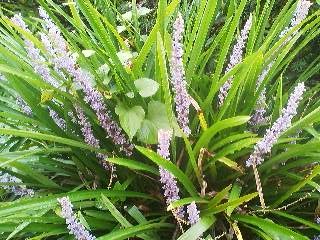 For westerners living in temeperate zones, autumn, with its falling leaves and decay,  is a season which often evokes nostalgia, or reflection upon the passing of time, and maybe even thoughts about own mortality. Naturally, in Japan, where  traditionally, the  contemplation of the passing nature of all things ( MUJO 無常) might be elicited by natural phenomena at ANY TIME OF YEAR, there is a similar sense of season regarding the fall. However,  this specific time of year, the beginning of September, with the sudden appearance of its comforting and soothingly cool breezes (especially at night), more than evoking MUJO, which  will be felt much more strongly LATER in the season, brings forth A SENSE OF RELIEF, for us having made it through the oppressively steamy summer ( especially for those like me who have no air-conditioning). I would go as far as to say that in past ages, the coming of September brought a sense of relief at having SURVIVED the summer, as July and August were the times when epidemics often raged .

In is interesting how in modern Japan, families are often split in terms of their feelings about the coming of September. Parents (especially mothers) feel  great RELIEF, as the kids go back to school and dont have to be taken care of all day. Meanwhile the kids themselves deeply REGRET the passing of summer, for the same reason…… that is, its the end of summer vacation and they have to go back to school.

Inspired by the great poets, I ( not very successfully) tried my hand at making a lyric expressing the emotions brought on by the season:

A heart is like an old fortess, protected by the strongest walls

With guards that are quite strict about, what you should, or should not recall

Buts its always susceptible to the rotting smells of fall 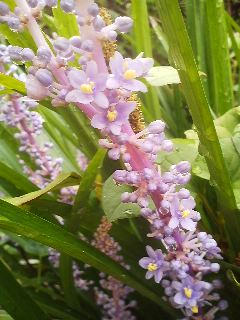 A closer look at the YABURAN flowers

This year I have been describing the various plants and flowers which successively spring up and wither away other the course of the year in Tsukuba`s wild and shadowy places (like my yard). Most memorably there have been HEBI ICHIGO , DOKUDAMI and TSUYUGUSA.

These days, looking about my garden, as well as walking in the woods around my house ( which fill me with a painful sense of REGRET as they might soon be bulldozed away) I have noticed that besides all the various shades of green, there is basically just one more bit of color- purple. This is supplied by the abundant emergence of YABURAN ( literally- the grove orchid, though they are NOT orchids), which now look like stems covered with clusters of little purple balls.

These will eventually give way to seeds which are black and shiny. I fear that by the time these seeds should have appeared, the last of Tsukuba`s extensive wild areas will have been cleared. 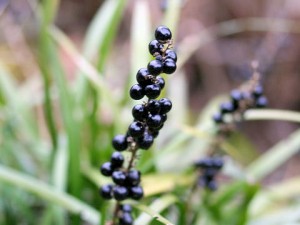 Here are some other posts relevant to September:

On the tree which provides plentiful (but just about the only) color- besides green to Japan`s hot season:

and the fruit of the YAMABOSHI tree: