TAISANBOKU (magnolia grandiflora)- a Grand Japanese Name (alluding to one of China’s famous sacred mountains) for a Tree that came to Japan from the American South 17 June, 2013 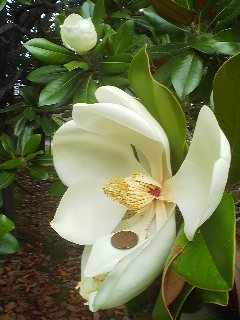 Though there are some purists I know in Japan who insist that the weather should fit the  season- the type who feel uncomfortable with the cool weather we have been having this late July ( a time of year which is supposed to be very hot and sunny) , most people, including myself, have been thankful for the overcast skies and unseasonably comfortable temperatures ( though we DO hope this does not negatively affect the rice crop).

In fact, instead of spending as much time as possible sheltering from the heat- which is how I usually spend this season, I have been taking advantage of the very-rare-for-this-time of year conditions by going on some long leisurely (sweat and heat-stroke danger free) walks.

One of these I took in the old town of Hojo, in northern Tsukuba, near the foot of the mountain. I wanted to see the preparations for this weekends big summer MATSURI (Festival)- which had been cancelled last July in the wake of a devastating tornado which swept right through the center of the town.

It was a pleasant walk- even delicious- in a cool drizzle under dark gray skies. I not only got a chance to see the newly erected bamboo posts and lanterns which will demarcate the sacred boundaries within which the festival will be held, but I also could see first-hand the remarkable recovery the town has made since last year’s disaster.

Beautiful new houses where just a few months back was rubble ( and before that- mostly houses which looked like they should have been condemned) and advertizements for numerous upcoming cultural events…….

Fond memories of life here flooded my mind as I passed each house, shop, temple, shrine and sacred stone. You see, I used to live here- and had to leave after the twister.

There is one interesting impression that Hojo left on me that I would like to share with you. It came back to me because I took this walk just after the Upper-House elections were held…

I remembered how on every election day that was held, the ladies in my neighborhood would dress up ( something equivalent to putting on your Sunday best) and go off to the polling place together- signifying that that day was a  special day (HAREH NO HI) as oppossed to aeveryday usual day. 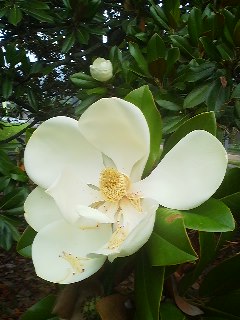 If it were not for the fact that the recovery from the tornado has been so dramatic, I would have had to say that it was the vegetation which was most impressive about my walk. And since Hojo IS famous for its rice, July’s insanely green paddy fields are almost dizzying as emerald waves rustle back and forth with the breezes.

Also outstanding were the boldly tropical orange, Chinese trumpet creepers (no-zen kazura), which as their name proclaims, could be seen creeping up fences, walls and utility poles throughout the town.

I kept walking east- all the way to the OIKE Pond, where lotus blossoms were blooming aplenty, bursting with beauty just above the water’s murky surface.

Walking along the pond”s southern embankment, I looked down below to the south and noticed what seemed to be lotus flowers growing on trees- about 50 meters from where I was walking.

I stopped for a more focused looked, and realized that the grand tree with the large, deeply green leaves and the immense white blossoms was what the Japanese call a TAISANBOKU tree- which literally means; the Mt. Tai tree.

And just where is Mt. Tai? Well, not in Japan- but in China’s Shandong Province. It has long been one of China’s most famous sacred mountains.

It must be the grandeur and mystery of this mountain which to which the name of the tree- also grand and mysterious, and covered with extraordinarilly large and fragrant blossoms which really look like lotuses- a blossom sacred in Buddhism.

With this distinguished and exotic name which conjures up images of China, Buddhism, and mountain asceticisms, one might think that this tree had come to Japan from China- as so many of Japan’s popular plants and trees have.

That is why I was surprised to find out that this amazing tree comes originally from the American South, where it commonly grows ( often called simply a magnolia), and was introduced to Japan only sometime  after the Meiji Restoration (1868).

Over the years it has become a popular decorative tree in this country which can grow up to 10 meters talls and blooms its impressive and very fragrant (in a citrusy way) in June and early July.

I guess the blossoms that I saw were still blooming bright white late into July because of the unseasonable weather.

I would love to go have a look at it on a clear night with a bright moon. The combination might be magical!