Noise-Making Devices in Toilet Stalls Make COURTESY FLUSHING a Thing of the Past and Helps Save TONS of WATER in Japan 9 June, 2013 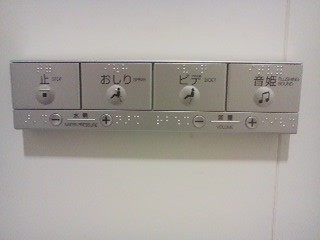 A control panel beside a toilet in the Mens` Room at Nova Hall in Tsukuba- when the button on the far right is pushed a very loud flushing noise is sustained under the sitter rises. Volume control is below. Note the Braille characters to assist visually impaied users.

The most amazing (and comfortable) feature of the Japanese rest-room, however, must be the fact that ALL THE STALLS ARE COMPLETELY PRIVATE. When their doors are shut and locked,  users  are completely hidden from view. This is a testament to the NORMALCY of Japanese society, and of how customers, clientele, and citizens in general, are trusted.  This stands in  great contrast to countries in which free private spaces are not made available due to a concern over what people might use them for. 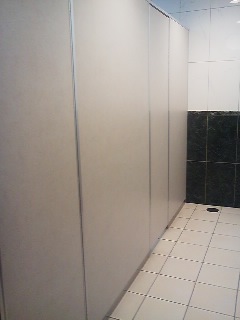 On the opposite extreme, there is China, in which (at least the last time I was there) there are NO DOORS at all for most public toilet stalls – very embarrassing when you are having stomach trouble (i.e. diarrhea) and are being followed around by a bunch of kids curious to observe a foreigner. The government obviously does not trust the public to have access to a temporary space which is completely private.

Then there is the U.S. (and most other countries) in which the bottom part of  rest-room stall doors  do not reach the floor so that the feet (and dropped trousers) of users can be seen from outside. This wide space is left open to prevent the homeless from sleeping there, couples from using them for a quickie, or drug addicts using them as a place to get high.

Talking about keeping drug addicts out, I remember once using a rest-room at a convenience store in a provincial town in Finland. When I entered I was disoriented by a strange blue light. When I asked the staff why they used such peculiar bulbs, they told me that it made it difficult for addicts to find their veins! Not a very pleasant story.

Well, must be because of the general NORMALCY of Japanese society (i.e. a lack of heroine addicts roaming the streets, among other things) that makes possible the completely private stalls- which are the rule here in this country.

I guess the Japanese public just respects the SANCTITY OF THAT MOST SPECIAL SPACE!

(of course, even in Japan these closed off stalls are sometimes taken advantage of- once long ago, a frisky girl friend of mine once had a sudden urge and pulled me into the stall of an empty ladies room at a fancy department store. Unfortunately, given the suddeness of it all, and lack of appropriate atmosphere, I just could not rise to the occassion!). 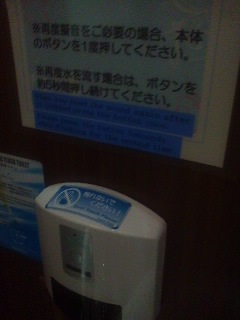 As the user sits, this device automatically emits loud ambient jungle sounds- a waterfall, birdsong and the cries of insects and monkeys- beside a toilet in the mens` room at the Tsukuba Botanical Garden. The loud sounds drown out any unseemly noises which might be produced by the user making water-wasting courtesy flushes unnecessary.

But even with all the privacy. cleanliness, and comfort, many people in Japan, especially ladies it seems, have  trouble with ANSWERING NATURE`S CALL at public facilites. The reason for this is simple-  they are shy about having the SOUNDS of their bodily functions overheard by other users.

What such people did, when they simply HAD TO GO at a public toilet, was to flush each time a sound was emitted from their posterior. This took very good timing and also WASTED A LOT OF WATER (I forget how many liters are used for each flush).

About 30 year`s ago, one enterprising company (Toto) had an idea ! Install devices into each stall which would emit loud sounds to muffle out any real bathroom noises ! At first they were sounds (LOUD FLUSHING or other NATURAL AMBIENT SOUNDS) which were activated by pushing a button. At one point, however, in their history, these devices were fitted with automatic systems which activated them when the user took his or her seat on the porcelain throne.

This can sometimes be quite startling. The other day, while at the botanical garden in Tsukuba, I felt the need TO GO. The spotless mens` room was empty. and the toilet stall spacious and comfortable looking. I was was looking forward to not only this SPECIAL SPACE, but to this SPECIAL (sacred?) TIME, I was about to spend.

Then when my weight pressed down on the seat, a loud sound suddenly came blaring out of a speaker beside me! I was nearly dethroned. Recovering my senses, I looked closely at the speaker and realized that the sounds ( a jungle soundscape- with waterfalls and wildlife) had been automatically set off by my unsuspecting backside. But I could not figure out how to turn off the noise, which with no one else in the rest-room to distrub with my bodily sounds- was simply annoying.

Sometimes turning the sound off can be even more pressing. Just yesterday, during intermisson at a piano recital at Tsukuba`s Nova Hall. my little son informed me that he had to use the facilites. The mens-room was impressive even by Japanese standards. My son actually commented upon it: Wow! This is a nice bathroom!

The stall I ushered him into was also impressive- befitting the esteemed cultural institution in which it was located. The only problem was, that when I helped my boy up onto the seat a terrificly cacophonous flushing sound started blaring out of a speaker- it was almost like a jet engine!

My son, who is very sensitive to loud noises was not pleased. In fact, his screams of: STOP THAT NOISE rivaled the flushing sound in volume and the ability to irritate.

In a panic, I scoured the buttons on the wall panel displaying all of the toilet`s features- bidet, backside wash…….. there it was…. the STOP button! I pressed it. First the device fell silent, then my son…… and we could procede with our business and get back to the concert.

(for a look and listen to an actual flush-sound device go to utube:

Despite these amusing little inconveniences these devices can cause, they CAN save you from embarrassment when there are others in the rest room AND because there are so many people who use them now instead of courtesy flushing-  they save a lot of water !

Enjoy your rest-room stops in Japan!

These sound producing devices are called OTO HIME (at least the ones produced by Toto are) and are found mostly in ladies`-rooms.

Checking online, I have found that you can download a flushing (or other sound of your choice) for the purpose of muffling out your own body`s noises as an app for your I Phone. Look here: 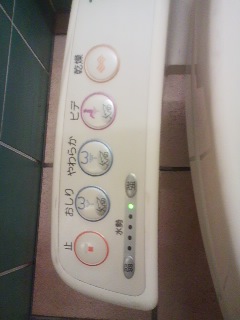 The function buttons on the side of a toilet at a Japanese rest-room in Tsukuba (from top to bottom: Dry, Bidet, Light Bottom Spritz, Strong Bottom Spritz and most importantly- STOP

You can see more pics and get more info by google searching: