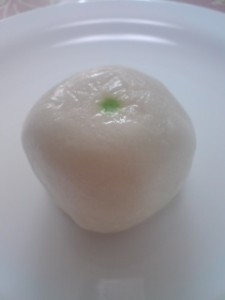 I`ve been a bit down in the dumps these past few weeks. Its been the weather. I was so looking forward to springs warm embrace, and to being able to walk around my house without having a winter jacket on ( in Japan most houses do not have central heating). But things have just not worked out as expected. We seem to have been given the COLD SHOULDER this year, and I`m STILL ( in mid-April) refilling the little fuel tanks on my kerosene heaters, muttering expletives to myself as I do so.

So, while DEPRESSION in Japan most commonly sets in in the month of May, as people have trouble adjusting to new work and study situations which have  begun in spring- with this syndrome being known as GO-GATSU- BYO ( 五月病), May Sickness –  it seems that I have come down with a hard case of what I will call SHIGATSU BYO- April Depression. I hope it will melt away as the air warms up.

Even while the weather has been chilled, there have been encounters which have ( briefly) lifted my spirits. One such experience was the result of a meeting with my friend Kaori Kakuta, who had just returned from a trip to Kakonodate ( 角館) in Akita Prefecture, a town famous for its cherry blossoms ( still too early) and its district of old samurai houses.

As is the custom, Kaori-San came bearing OMIYAGE ( お土産) to share with friends. These are gifts, usually foods, which ideally should be representative of a place ( either visited or one`s hometown).  Each city and tourist attraction has its own such products with some of them having become iconic representations of their places of origin ( for example, nearly all Japanese people would understand, when recieving dove shaped cookies, that the giver has been to Kamakura).

Kaori had brought what looked like typical Japanese cakes called MANJU, which are dumplings made of wheat flour, usually filled with sweets beans. Not having heard their name, which would have prepared me for what was inside, I casually bit into mine. 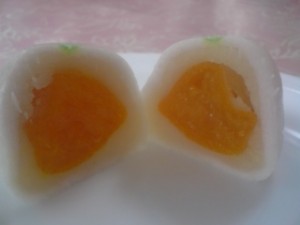 Kinkan Manju sliced down the middle revealing its inner contents...

Expecting the usual bean filling, my tastebuds were jolted with the suprising sweet and sour sensations they encountered. I held the cakes up for a look at what exactly it was there inside…….. a stewed KINKAN, in other words- kumquats, which are like tiny, bite-sized oranges.

I excitedly asked what these cakes were called, and found out that their creator had simply named them KINKAN MANJU ( kumquat dumplings). I said that it would probably be better to give them a name which would hide the identitiy of their contents because the surprise it provides to unknowing biters is surely one of its strong points.

In any case, these snacks are a great idea and right away I went for another one. I even asked if I could take one more for the road, and was kindly obliged. 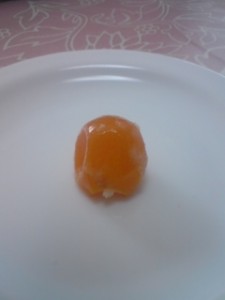 Just what connection there is between kumquats and Kakundate ( if any), I do not know, but if anyone does head up there, as well you should, for either the cherry blossoms or its historical architecture and crafts, please bring back some KINKAN MANJU for me!

It might also be possible to order them buy phone, mail or email. Here is there contact info:

The name of the shop is GOTO FUKUSHIN DO ( 後藤福進堂), and it seems that they sell kinkan manju for 100 yen a piece.

For more info on Kakunodate:

Remember, you still what time to catch the cherry blossoms up there.