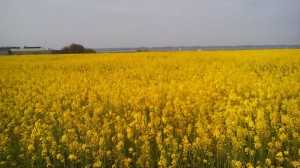 The cherry blossoms might be Japan`s most famous flower of spring (or ANY season for that matter), but alas, in any particular part of Japan,  the pulsating pink,  cloud-like canopies that they create usually stay in bloom for just a few days. As the delicate petals start to fall away, filling us with a deep sense of MUJO (無常), the passing nature of all things, the ground does remain a scattered pink for another day or two. But it is at this time that the true color of Japanese spring begins to set in and then completely dominate the rural scenery. I am talking about the wavy yellow carpets of nanohana (菜の花) which take over the riverbanks, roadsides, vegetable field borders and just about any other undeveloped open space.When looked at from a distance, the clusters of little flowers blooming on the tall and slender stems can create a dreamlike scene, especially when they stretch to the horizon filling the air with their pasty, intoxicating scent.

The Japanese have long used nanohana as a food. Archaeological evidence shows that certain nanohana were eaten in the Yayoi period (330BC-300AD), and other species  are mentioned in the earlest of Japanese writings (The Kojiki and The Manyoshu).  If you are invited to a Japanese home in spring you might very well be served them in the form of OHITASHI ( the leaves , stems and flowers boiled and then flavored with with soy sauce), or my favorite- KARASHIAE (the same, but with some hot mustard added). 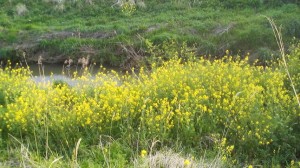 Another interesting tidbit which I remember when thinking about nanohana, is that these flowers are offered at the grave of the most famous of all Tea Masters and man of impeccible taste- Sen-no-Rikyu(1522-1591), on his memorial day, April 21. This is because the banks of the Yodo River were lined with them as he composed his final reminiscences, as a boat carried him to the spot where he was to commit ritual suicide (under the orders of Toyotomo Hideyoshi). 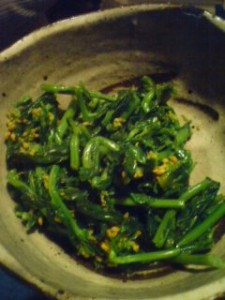 Nanohana no karashiae as part of a dinner in Tsukuba- DEELISH! 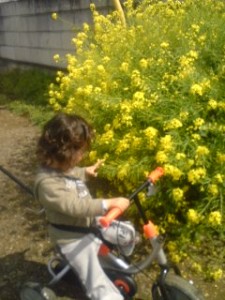 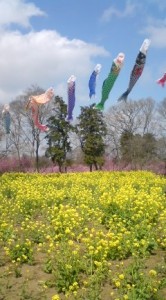 Apparently nanohana ( rapeseed plants) as well as sunflowers ( himawari) absorb alot of radiation. For this reason, those who live in the areas more strongly affected by the leak at the  nuclear power plant in Fukushima HAVE NOT enjoyed eating locally grown NANOHANA since last year ( how many years will it be before there will be no concerns over this?).
Interestingly, despite the fact that it sucks up radiation, the SEEDS of the rapeseed flower are not contaminated. These flowers are actually believed to help clean up radioactive soil, and have been planted in Fukushima Prefecture ( in the worst affected areas).
Ironically, this idea of removing radiation was first put into action by good-willed Japanese who wanted to help the area affected by the Chernobyl accident recover.
You can read about their project here: