Camellias (tsubaki, 椿) Create Distinctive Groundscapes and Soundscapes- and this year (2012) seem to be more colorfull than ever! 11 April, 2013 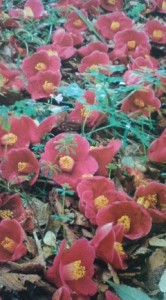 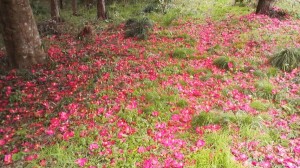 Now deep into DEEP SPRING ( though still cold) , my household has almost completely emerged from its state of FUYUGOMORI (冬篭り), the shuttering up, bundling up, and holing up, that those of us living the traditional Japanese way do (that means without central heating!)  for a few months out of each year. Now, when I sit in my  tatami-matted Japanese style room, instead of huddling up by the noisy little kerosene heater or hunkering up with my legs roasting in a kotastu (a heated table),  I can open the large windows, leting the warm, pollen heavy breezes drift in, occassionally bringing the intoxicating scent of some newly blossomed flowers to my nose. With this delicious air, and the raucus chatter of birds busy with their mating and nest making rituals, it is just about impossible to concentrate on reading , writing, or anything else for that matter. The only option seems to be to savor the moment. 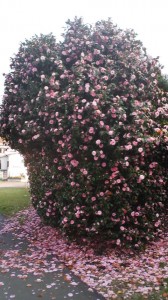 The edge of a huge camellia hedge

The other day, while I was doing just that, the breeze turned to a gust, and the air filled with fluttering cherry blossom petals blown off some nearby trees, creating the illusion of snowfall. Many of these settled in my yard, forming a delicate pink mosaic which seemed alive as it shifted with the wind. With a UGUISU ( Japanese bush warbler) crying out its distinctive called, I was overcome with the feeling that I was experiencing Japanese spring to its fullest! 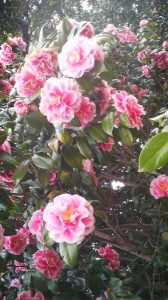 It was just then as the wind died down for a bit and the birds let up on their chatter, that I heard a sound which took my spring moment to an even HIGHER LEVEL- a light thud, which in Japanese, so rich in onomatopeia, can be expressed a BOTO, POTO, or POTORI-POTORI- the distinctive souns of a camellia (tsubaki) blossom dropping to the ground. Then, after a pause………. another- BOTO! What makes the falling of this blossom so special is that unlike the plum, cherry or peach, the other tree born blossoms representative of Japanese spring  which fall away PETAL BY PETAL, the camellia flowers drop off WHOLE! This creates a unique scene under the tsubaki trees, which are so common in Japan- large bunches of boldly colored, intact flowers strewn on the ground- sometimes over a wide area. For the samurai, this was a gruesome picture, reminiscent of the lopped-off heads of dead warriors, and that is why to this day you will hear many Japanese people say that dropping camellia are disturbing, and that they would never plant them in their gardens. It is also held to be common sense by many Japanese that this flower should never be offered at temples or given to people who are sick in the hospital.
This cannot be said to be the rule, however, as it is plain to be seen that camellias of all sorts can be found almost everywhere you go in Japan, even at temples. Just goes to show that samurai ethics did not permeate Japanese society THAT thoroughly. 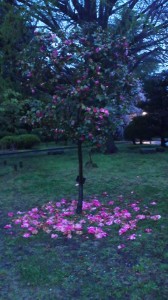 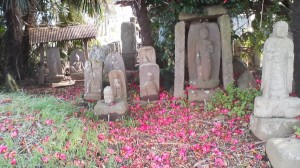 Fallen camellias by Route 125 on the Tsukuba City-Tsuchiura border

Another reason for the camellias popularity throughout Japanese history is the many products which can be made from it, the most important being all sorts of oils, which were used for cosmetic purposes (especially for hair), for cooking, fuel etc. The wood is also utilized in many ways, including the making of dye from its burnt ashes, and various tools and weapons. It  also became a major flower to be used in the Tea Ceremony. The reason for this is interesting- it has NO SMELL and while while adding beautiful color and form to the occassion, does not interfere with the aroma and flavor of the tea.
Camellias are native to East Asia and they were introduced to Europe and then America, from Japan, in the 18th century, and these JAPANESE ROSES became all the rage, and stand as one of Japan`s most important exports of past ages. 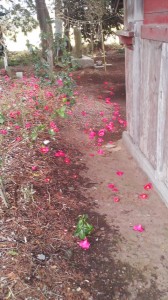 So keep your ears and eyes open for these most distinctive of Japan`s spring soundscapes and groundscapes. The camellia flowers, lying unbroken on the ground- and the BOTO, the gentle thud of its hitting the ground.
As you can imagine, many poets have  written of this. Here is one of my favorite examples, by Buson-
TSUBAKI OCHITE KINO-  NO AME KOBOSHI KERI (椿落ちてきのふの雨をこぼしけり), which I translate as-  A tsubaki flower falls- and look! Yesterday`s rain comes splashing out! 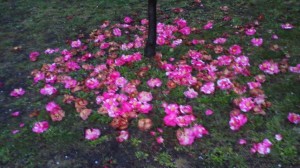 At the National Museum in Ueno

There are about 250 varieties of tsubaki, and they can be found throughout Japan (except for Hokkaido).
Another thing to keep in mind is that there is a very similar looking flower- the sazanqua (sazanka), which people often mistake for tsubaki. There are 2 ways in which we can generally tell the difference. First by the season. Sazanqua bloom at the end of the year, while tsubaki`s flowers appear in spring. Second, the sazanqua`s flowers fall away petal by petal as do most other flowers and blossoms. So you can tell the difference between the two by CHECKING THE GROUND. 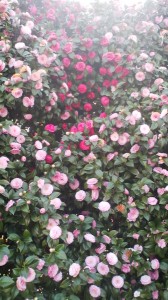 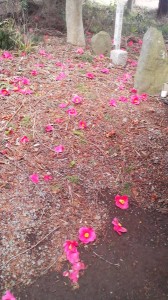 Get out and enjoy this month`s treescapes and GROUNDSCAPES ! 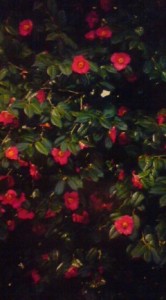 The deep greens and reds of the camellia tree in bloom