Tsukuba Dust Bowl- Instead of Comforting, this Year`s HARU ICHIBAN (春一番)- the First Warm Gusts of Spring – Darken the sky AND the Mood 1 March, 2013 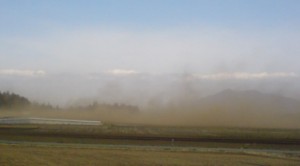 After months of  uncomfortable and sometimes bone-chilling air temperatures, those of us living in Japan eagerly anticipate the HARU ICHIBAN (春一番)- the first warm winds of spring which blow when a low pressure zone forms over the Sea of Japan and draws up some tropical air which sweeps across the archipelgo. This usually occurs sometime  before the spring equinox which this year (2013) will fall on March 20th. This wind, with its characteristic feel and small is usually quite heartening- giving us a taste of the warmth and blossoming to come. In past years I have found it to be soothing to the body AND the soul. 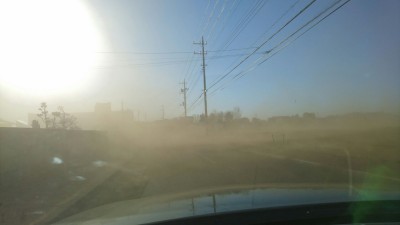 But despite the fact that today was the HARU ICHIBAN, offically acknowledged by the Meteorological Agency of Japan, the atmosphere it created was far from pleasant- in fact the mood reminded me a bit of what it was like in Tsukuba just after the accident occured at the nuclear power plant in nearby Fukushima Prefecture in the wake of the earthquake and tsunami of March 2011. Just like back at that time people avoided going outdoors- and if they did they wore masks- and not just the cheap masks usually worn by the Japanese to prevent catching or giving colds- but more sophisticated and expensive looking ones.

Why? Foremost on people`s minds when they think about the air quality is the problem of tiny particles of pollution which have been blowing over from China. These are so small that most masks will not prevent you from inhaling them into your lungs where they can possibly lead to serious health problems.  Many appeared very concerned about these particles.  I however ,felt particularly safe from that threat today (mistakenly perhaps)- because the strong and continuous gusts were blowing in the opposite direction: towards China.

Whether or not today was a good or bad day for PM 2.5 ( the name of the dangerous pollutant), there were other reasons the wind was causing stress.

In recent years, the coming of spring has become an ordeal for many- specifically those who suffer from hay fever. In Japan, this ailment is most often triggered by cedar pollen in the air- and their are PLENTY of cedar trees which were planted en masse all over the country after the terrible deforestation which occurred right up to the end of WWII. Today I heard some people say they could actually SEE the pollen in the air.

I`m not sure if this was just their imagination or not, but anyway something definitely was visible in the air- dust and soil- whipped up by the winds- and probably containing plenty of radiocative particles which which have landed around here since the nuclear accident.

And besides the health concerns, it was the SCENERY created by the that disturbed me most- driving through Tsukuba`s old neighborhoods today was a truly HAUNTING experience, reminding me of certain  pictures I had seen in history books.

The 1930`s in the US were not only a time of failed businesses, widespread unemployment and homelessness, but also of environmental diasaster. In fact, THE most iconic images of the years of The Great Depression are not of shuttered up shops or investors who had lost everything jumping out of sky-scraper windows, but black and white photo`s of the apocalyptic-looking dust storms which raged in the mid-western farm regions (especially the panhandles of Oklahoma and Texas which came to known as The Dust Bowl). The clouds of whipped up soil which darkened the skies making people believe that the end of the world was at hand, were brought about by drought, wind AND the misuse of land. 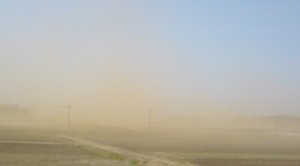 That is why I got THE CHILLS today in Tsukuba, when in an economic climate which more than anything else I have experienced in my life-time evokes images of The Great Depression (empty buildings, shuttered up shops, mass lay-offs etc), the sky was actually DARKENED BY CLOUDS OF DUST. I thought I had driven right into the cover of a Woody Guthrie album. 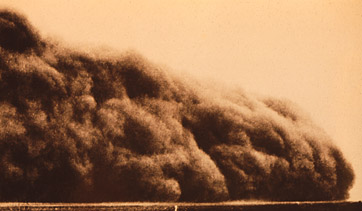 Yes, March is always the windiest time of year in Tsukuba (and unlike today, these winds are usually frosty!), and soil is often blown into the air. What has made things worse than anything I have ever seen in this area, though, are the huge tracts of deforested land which await being turned into housing developments (though these might have to wait a while as not many people are in a position to buy right now). 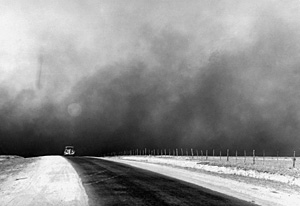 Don`t get me wrong. I am not comparing todays weather conditions in Tsukuba to those which created the Dust Bowl. And the economy here  still seems to be much better than it is in other parts of Japan (in fact a drive through the shuttered up old shopping districts of our neighboring cities will show you that we Tsukubans are enjoying relative boon times!).

Still ,  todays unusual HARU ICHIBAN weather , coupled with the current economic climate, evoked historical associations in me which sent a shiver down my spine. I hope we can all pull through these rough times together, though Im not even sure if its worth the try- with the threats to our health posed by radiation, pollen and pollutants If not, many of us will be singing the words to that great Dust Bowl Ballad which goes- So long, its been good to know ya ……… got to be drifting along……..