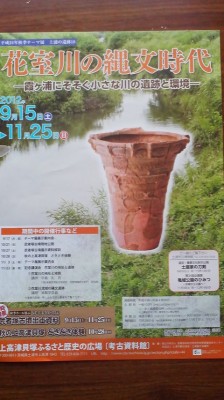 A flier advertizing the small exhibition on Jomon Period Life Along the Hanamuro River at the Tsuchiura Archaeology Museum (until Nov. 25th)

By Avi Landau
If you ask a native or long time resident of Tsukuba to name one of the city`s rivers, their answer will often correspond to the area in which they grew up or live. Those from the eastern and northern parts of the city (to the east of the University or Higashi O-Dori Road) will almost certainly name the Sakura River –  which is significant far beyond its 42 kilometers in length. For more than a thousand years it has been noted for the wild cherry trees which grow near its source in Iwase- having been mentioned in the works of great poets AND being the title of a Noh play by that genres most important writer, Zeami.  This area`s greatest fireworks event, the Tsuchiura Hanabi Taikai is also held on this rivers banks each October. And most importantly, it has long supplied water for farmers who cultivate rice in its basin.
Those from the western part of what is now Tsukuba City will most probably name the Kokai River (111 km in length) , which flows down from Tochigi Prefecture to form the city`s western boundary. It was long significant as a conduit of river travel, a source of fish and irrigation water, and is still popular today for fishing and its own famous fireworks event.
And then those from the southern part of the city- namely the Yatabe and Kukizaki areas will most probably name the Yata rivers ( there is the East Yata and the west Yata) which flow through their part of town into lake Ushiku.
There are also the few, more classically oriented people to whom the Minanogawa (男女川) will come to mind. This river which is mentioned in one of Japan`s most famous poems is written with the Kanji characters meaning MAN and WOMAN, as it flows out of the valley between Mt. Tsukuba`s twin (male and female) peaks. 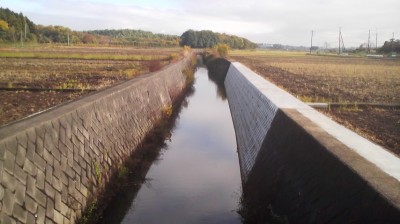 For me , however, there would be another river that would first come to mind- The Hanamuro- one that I crossed  on foot or by bicycle at least twice a day for nearly every day for many years when I lived near the old Sakura City office.  A river that I guess most people would hardly consider a river at all at the point where I used to encounter it most often-  at its up stream segment, not very far from its source, which is near the Ichinoya Yasaka Jinja in Tamatori, Tsukuba. There, in that part of its 14 km course to Lake Kasumigaura, it looks more like an irrigation canal, narrow and hemmed in by concrete banks.
Still, whenever I passed by in daylight I would stop for a few seconds (or longer) to check out what was going on in its usually slow and shallow flow. I would sometimes see ducks, cormorants, egrets or great herons. Three or four times over the years I saw the brilliant blue flashes of Kingfishers flitting out of sight just as I pulled up to take a look.
I realized that it was only natural, however, that few people, besides those who live in the hamlets along its banks, would have ever heard of the Hanamuro ( though there is a neighborhood and an important intersection in Tsukuba which bears the same name- as the river flows near there and in fact once formed a major reservoir, the Hanamuro Oike 花室大池- now filled in for a housing community and rice fields- which once provided water for farmers in the surrounding hamlets) 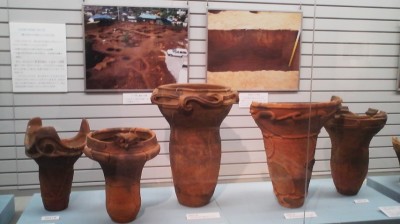 But the  River seems to be making a name for itself lately. It has in fact been the focus of two exhibits on this area`s archaeology- one of which is showing right now- at the Tsuchiura Museum of Archaeology ( which along with its adjacent park and the nearby Shishizuka Oike Pond is one of my favorite places in the Tsukuba area). The present showing is entitled The Hanamuro River`s Jomon Period, and it will be on until November 25, 2012.
The small exhibit puts on display some of the  amazing artifacts which have been unearthed along this river`s banks-  some along its course through Tsukuba, but mostly after where it turns and heads east through Tsuchiura and into Lake Kasumigaura.
There are the 30,000 year-old fossilized remains of a species of now extinct elephant called a Nauman Zo (which were actually discovered way back in 1975 on the banks of the Hanamuro in Tsukuba`s Kami-Hiro-oka neighborhood), stone tools, clay figurines, and a spectacular collection of pottery- made to be used for a variety of purposes- from storing food to interring dead bodies- all made at least 5,000 years ago, some as far back as 12,000 years ago. 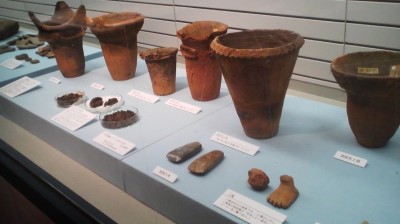 The dating of these artifacts is significant. 5,000 years ago was when the sea levels were still very high. All of what is now Tokyo was underwater, and Lake Kasumigaura was at that time a bay which came way up near Mt. Tsukuba along the basin in which the Sakura River flows. That is why the banks of the Hanamuro River are so rich in remains from that time- it flows for much of its length at a HIGHER ALTITUDE ( 25-30 meters) than the Sakura River does in its Tsukuba-Tsuchiura segment and was thus not under water.
The archaeological record shows that it was only later,  about 3,000 years ago, when the sea had receded, that the Sakura River near Lake Kasumigaura became actively settled. 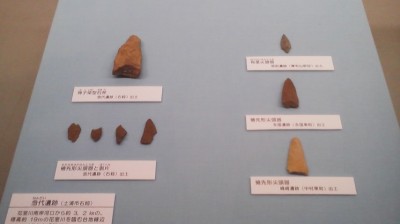 The exhibiton shows us how how the earliest artifacts along the Hanamuro were from 12,000 years ago, with an increase in findings from 9,000 years back. There then seems to have been a tapering off of settlement in the area, But from 5,500 years ago there appears to have been a big upswing in settlement along the river, with a peak reached at 5,000 years ago. At that time there were many villages consisting of  homes ( a reconstruction of what one of these might have looked like can be seen in a photo below), storage pits, and even animal traps.
At 4,000 years ago, it seems that the population along the river begins to decrease, and then there are almost no remains from 3,000 years ago. 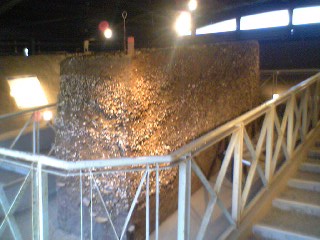 Entry to the museum is 110 Yen and besides the current exhibition there is the excellent permanent exhibition on prehistoric life in the area and in the adjacent park a cut-away of a KAIZUKA shell mound and the recreation of some Jomon Period dwellings. A hike further afield to the north will take you away from it all to the Shishizuka Oike Pond- where you could imagine that you were back in the Jomon Period yourself.

Its about a 15-20 mintute drive from Tsukuba Center to the museum. Here is a map:

http://www.city.tsuchiura.lg.jp/map.php?code=173
And by the way, in the room with the Hanamuro Exhibition and just outside it, you can see the artifacts found inside one of this area`s most important burial mounds (KOFUN)- the MUSHAZUKA KOFUN. I have written previously about why that excavation was so important:
http://blog.alientimes.org/2010/12/tsukuba-u-archaeologists-made-hairy-discovery-in-niihari-an-intact-mizura-%e3%81%bf%e3%81%9a%e3%82%89-side-lock/ 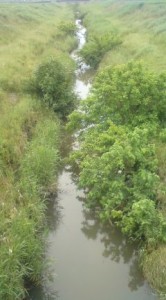