The Site of the Ancient Rokusho Jinja (六所神社) Shrine Comes to Life One Day a Year During the Autumn Festival at the Foot of Mt Tsukuba (Tsukuba-Sanroku no Aki Matsuri) 10 November, 2012 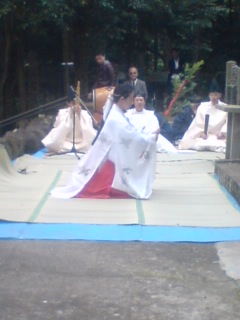 Offering are made before a concert of traditional court music and dance at the ruins of the ancient Rokusho Jinja Shrine (as part of the Autumn Festival at the Foot of Mt. Tsukuba

The number of vistors to the Mt. Tsukuba Shrine has been increasing with each coming year since the opening of the Tsukuba Express Line (connectingTokyo and Tsukuba), and on especially on weekends and holidays the shrine and the paths leading to the sacred mountain`s twin peaks can seem as crowded as Disneyland. It might surprise you to see how many young girls make the pilgrimage to the shrine. This can be seen as being part of the POWER SPOT boom ( power spots are places believed to provide visitors with charges of positive energies!), and perhaps as an expression of these young women`s desire to find a suitable partner for love or marriage- since the the Mt. Tsukuba Shrine is said  a good place to pray for a good match, as well as for marital happiness.

And while it is true that Mt. Tsukuba has been considered sacred since time immemorial and has long been connected to love and the interaction of the male and female forces ( because of its symbolically significant twin peaks), the Mount Tsukuba Shrine (Tsukuba-San Jinja) itself, was only established in 1870- after a great Buddhist temple which had stood on the spot for more than a thousand years (since the year 782, to be exact)- the Chisoku Chuzen Ji Temple- was destroyed in a fit of anti-Buddhist and anti-Tokugawa ( the family that controlled Japan during the Edo Period and put a lot of money into that temple in the belief that it would protect them from the KIMON- the unlucky direction) fervor which raged for the first few years after the Meiji Restoration (which overthrew the Tokugawa`s) in 1868.

While the great temple still stood half-way up the mountain, the great biannual festival associated with the Gods of Mt. Tsukuba ( which is still held each year in spring and autumn and is centered around the Mt. Tsukuba Shrine)- the OZAGAWARI (which I have written about in detail in previous postings) – would be centered around a shrine which was located near the foot of the mountain. This shrine was at least as old as the temple, and perhaps much older.

Though while now the Mt Tsukuba Shrine thrives and is flooded with tourists, pilgrims, lovers and the love-lorn- the old shrine, the ROKUSHO JINJA, has been all but forgotten. In fact, it does not even really exist anymore. It was abolished in the 43rd year of Meiji (1910) as part of an adjustment of the Shinto Shrine system ( the old thatched-roof structure was also prohibitively expensive to maintain!). Parishioners of the shrine were told to worship either at the Mt. Tsukuba Shrine or the Kokage-San Shrine (which is also nearby). Today, passing by the spot that it once stood on in Tsukuba`s heavily wooded, green and peaceful Rokusho neighborhood, you will find only a stone torii gate and a handful of stone monuments ( but still plenty of positive energies!)- and not a single soul around. 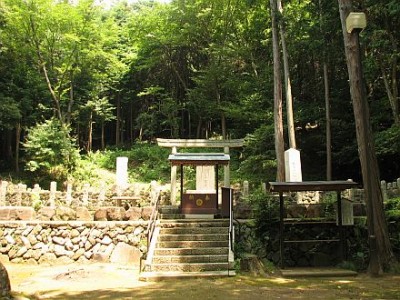 The site of the Rokusho Jinja Shrine in Usui, Tsukuba- the shrine was abolished after the Meiji Restoration of 1868 with its enshrined deities being transferred to the then newly established Mt. Tsukuba Shrine and the nearby Kokage-San Jinja Shrine

In recent years, however, this forgotten spot has come to life one day each year as part of the Autumn Festival at the Foot of Mt. Tsukuba. I always try to make it there ( and recommend that you do , too- next year!). The events, featuring traditonal music and costume, are delightful in this very special setting. Knowing a bit about the history of the shrine makes the experience nothing short of magical! 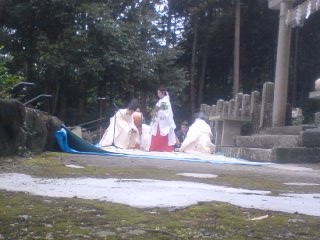 The ceremony before the performance

Legends contend that the Rokusho Jinja was established during the reign of Japan`s first Emperor- Jimmu. That would date this shrine back to the year 657 B.C- though as I have said , this is legend and not history.

A more reasonable dating of the shrine`s establishment would be in the mid- 7th century, after the Taika Reforms led to the creation of the Land of Hitachi ( which now makes up most of what is now Ibaraki prefecture) and its six original districts – Niihari, Tsukuba, Ibaraki, Naka, Kuji and Taka ( Rokusho Jinja would have been in the Tsukuba District). At this time the areas under the rule of the Yamato Court were reorganized in order to better keep things under control and to better collect taxes.

The Rokusho Jinja, which actually means the Shrine of the Six Deities, was probably created as a result of combining various other existing shrines and putting all their Gods under one roof ( in a fashion similar to the reforms which eventually led to the shrines own abolition in 1910). These Gods were Izanagi and Izanami,( the divine couple, which according to Japanese myth created the land and a myriad of other deities), their first son Hiruko, Tsukiyomi no Mikoto- the Moon Deity, the Imperial ancestress the Sun Goddess Amaterasu, and her brother Susano no Mikoto. 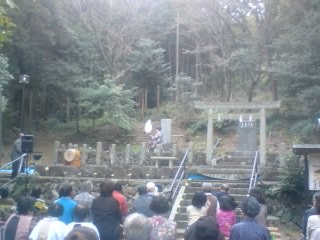 The small but satisfied crowd that made it to the event

Now during the time of the Taika reforms, when the Land of Hitachi was created, there was of course a governor sent from the capital to rule this area.

The capital of Hitachi no Kuni was in what is now Ishioka City ( then it was called Fuchu). However, there are some scholars who believe that before Fuchu became the capital, the seat of government in this area was on the south side of Mt. Tsukuba- in what is now Rokusho! This is because of certain passages in the ancient chronicles of this area ( commissioned to be compiled in the early 8th century)- the Hitachi no Kuni Fudoki refer to a man called Nakatomi no Hata who was sent by the Emperor to rule the area. Well, the family that long held the hereditary position of the preists of the Rokusho Shrine in Rokusho Tsukuba have a family tree which indicated that that person was their ancestor!

It is also important to note that at the sites of the old capitals of the Lands of Sagami (now Kanagawa Prefecture) and Shimousa (Now Chiba) there were also shrines called Rokusho. 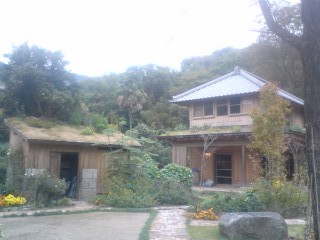 Near the shrine ruins are some beautiful homes- including this complex designed by Prof. Ando of Tsukuba University- piano concerts are held here regularly

This is certainly  food for thought indeed for anyone interested in the history of Tsukuba or Ibaraki. But when lightning struck a big tree on the shrine grounds in 1871 and knocked down its old stone torii gate, firther confimation was given to a story which would  those with a more general interest in Japanese history.

When that accident occurred a bronze mirror was dicovered with an inscription which read that the stone gate indicating had been erected in the year 801 by that original Barbarian-Quelling Generalissimo (Seii-tai-Shogun) himself- Sakanoue- no- Tamuromaro, on his way back from his expeditions to conquer the lands of the Emishi in Japan`s North-East. The famous warrior ( and the man who built Kyoto`s most popular tourist attraction- the Kiyomizu Temple) had stopped by the Rokusho Shrine to give thanks for his victories and pray for future ones. Apparently he had also made offerings of some armour, a sword and horse gear to the shrine.

Nearly 400 years later, in 1187, Minamoto no Yoritomo, the first warrior to actually take control over Japan, made Rokusho Shrine on of his clans`s votive shrines.

In 1195, Hatta Tomoie, Yoritomo`s trusted ally who recieved the territories which are now the Tsukuba area as his domain (Hatta`s descendants changed their name to Oda, and the family ruled this area, from Oda Castle until the 1570`s- the only family in all of Japan to rule from the Kamakura Period nearly up to the Edo Period!) donated an image of the Kannon Bosatsu to the shrine.

And then throughout the Edo Period (1600-1868), the shrine was connected with Mt. Tsukuba`s traditional events ( the festival I mentioned at the start of this article, among other things) and was of course connected in the minds of the people with match-making, love, and marital happiness. This is because Izanagi and Izanami, the mythological first couple, were enshrined there. There was an immensly popular book published in 1687 which helped brand the image of the Gods of  Mt. Tsukuba as cupids in the peoples` minds. It was called Tsukubayama Renmeisho and it described several cases of how the mountain`s deities helped make some good matches come about. I guess that you could say that the Mt. Tsukuba Shrine really took the place of the Rokusho Shrine when it was built on the site of the demolished Chuzen Ji Temple. 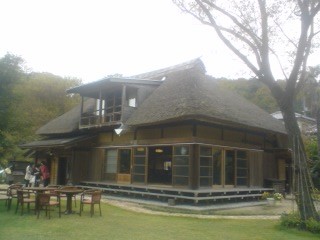 The ruins of the Rokusho Shrine might not be very impressive to look at- there is nothing really-, but as I have said, if you know the history, walking around the site can help your imagination conjure up the past. The neighborhood itself is also quite wonderful with some beautiful old houses, a waterfall ( with a hiking course) and plenty of narrow lanes to get lost on. 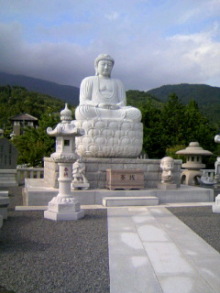 This large Buddha sits in the valley below the shrine 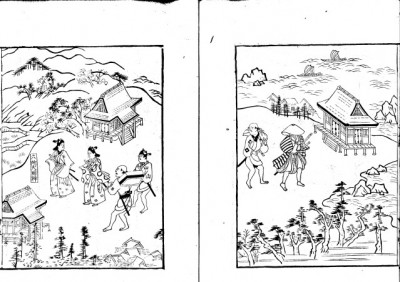 Here is a map showing how to get to the ruin of the Rokusho Shrine: