In the Empty Lots Where Hojo`s Tornando-Damaged Houses Once Stood- Only Uji Gami (氏神) are Left Behind – but just what exactly are these UJIGAMI? 14 July, 2012 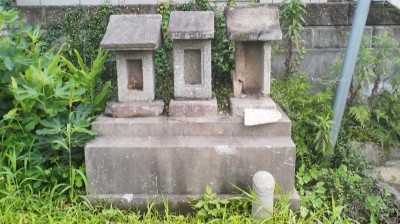 Uji-Gami in Hojo, Tsukuba. These small shrines which should more accurately be called YASHIKIGAMI are believed to protect the particular piece of property on which they are located, as well as the family who resides there.

I guess this could be said of any of Tsukuba City`s old neighborhhoods- the families living there have been there for generations. First sons (CHO-NAN) usually stay on with their wives and kids in their parents` ( and grandparent`s) homesteads which are often large compounds consisting of more than one house and several other structures. When there are only daughters, it is usual for families in these areas to adopt a son-in-law who will take on and help carry on the family name. These adoptees are called MUKO- YOHSHI.

In this way, these hamlets and their grand Japanese style houses have been kept IN THE FAMILY- for centuries.

Despite the fact that many of the residents of Hojo, one of Tsukuba`s more famous traditional areas, have lived there for their whole lives, these days they might not be able to recognize where they are in their own neighborhhood or easily find their ways around anymore. This is because a powerfull tornado passed through there on one fatefull day in May ( the 6th , to be exact) leaving a trail of damage in its wake.

Within a few days of the disaster all the rubble and debris had been cleared. Then over the next few weeks, the demolition crews got to work on the damaged houses. When they were finished,  some of Hojo`s neighborhoods which were once densely packed with houses or family compounds surrounded by walls were left as nothing but empty lots.

At least they appeared to be empty at first glance. I soon noticed, however, that on each of these bare plots of land, there stood at one corner of the property, one or more knee-high stone objects which the locals call UJIGAMI-SAMA. 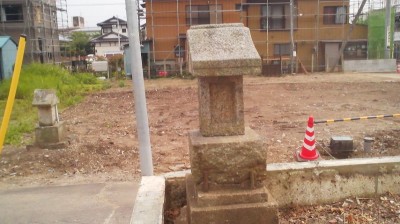 Uji-Gami in vacant lots are all that remain of many pre-tornado houses in Hojo, Tsukuba 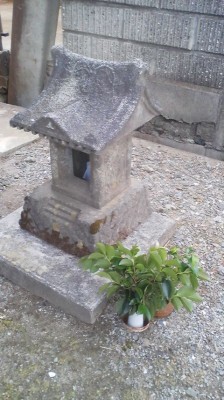 A small stone shrine for the UJIGAMI-SAMA in Hojo, Tsukuba - with offerings of sakaki leaves

Of course even before the tornado struck I had been familiar with such stones and there were a few which I would see everyday on properties with no wall around them ( yes, I used to live in Hojo but had to move out for repairs to the house after the twister). It was only after the disaster that I realized just how many ( in narly every house) of these stones there were- but most had been hidden behind walls or other structures and were only revealed to the public eye after the demolition crews had done their work.

Naturally, seeing these objects, now standing forlorn at one (seemingly random) corner of just about every newly cleared empty lot in Hojo, I wanted to know more than the little that I did know about them.

I soon found out, after doing some research at the library, that in their abundance they were a characteristic feature of the Southern part of Ibaraki Prefecture ( where they are much more common than in other parts of the prefecture), and that their presence can help you distinguish  the houses of Tsukuba`s native residents (JIMOTO NO HITO)  from those of the more recent arrivals to the area (SHIN JU-MIN).

I have also found out, from reading and interviewing my neighbors, that like just about everything else traditional in Japan, these small stone shrines which my neighbors called UJIGAMI SAMA, had had several meaning and functions over the centuries and are still something quite complex to understand. In Fact they might not be true UJIGAMI SAMA at all, as the term is generally understood in Japan.

Let me try to explain. 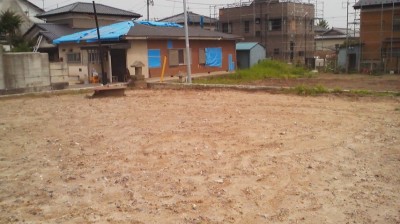 Originally, the word UJIGAMI had only one meaning: the deified spirit of the founder of a great clan. It was believed that such a spirit, when properly respected and cared for would always continue to aid the UJI- the deities human descendants and their retainers .

An example of this would be the deity AMENOKOYANE NO MIKOKOTO, enshrined at the Kasuga Taisha Grand Shrine in Nara as the Ujigami (Ancestral God) of the great Fujiwara Family ( previously caleed the Nakatomi).

There are cases, however, in Japan, when what is called the UJIGAMI is NOT an Ancestral God, but a deity which is beleived to be closely related, connected, or allied to a specific clan or family.

As an example, lets use the Fujiwara Family again. Though their Ujigami was enshrined at Kasuga Taisha, the family also adopted the deities of Grand Shrines of Kashima (right here in Ibaraki Prefecture) and Kattori ( in Chiba Prefectue) as their Ujigami.

Another famous example would be the Minamoto Clan association with the deity Hachiman- not a true ancestor of the family, but the deity most closely connected with them as their UJIGAMI. 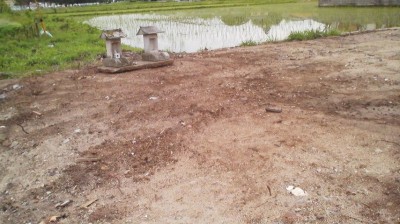 Many old families in Japan, especially at the houses in which the Main Line of the family ( Hon Ke) lives，continue to make offerings to the UJIGAMI shrines on their property.

Most of the families in Tsukuba`s traditional neighborhoods are not the scions of great clans. What they have on their property, in one of the corners, though called UJIGAMI SAMA , have been put there for protecting hope of protecting the plots land.

And though these little stone shrines (hokora) might be actually dedicated to ancestral spirits, they are more likely to be dedicated to popular deities. If you take a close look at the stones you can often see the deity names engraved: in Tsukuba Inari, Hachiman, or Tenjin are common. Sometimes there might be a cluster of 3 stones with all of these deities names  on them.

If these families have also own any woods or bamboo groves, they more than probably have a protective spirit enshrined there as well. These are often made covered with little straw tents which are renewed every year . These are  called WARA HO-DEN (藁ホウデン) in this part of Japan. In recent years I have noticed, however, that these little straw shrines in the woods have been replaced with the stone versions (easier to maintain!) 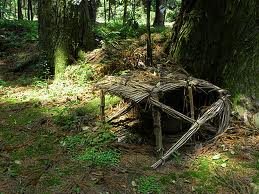 WARA HO-DEN (little shrines made of straw) like this can be found on wooded hills in the Tsukuba area. They are set up there by the land-owners to house guardian deities

Since in most cases in Tsukuba, what are called UJIGAMI SAMA are not strictly ancestral spirits, but are small shrines dedicated to various popular deities placed at a corner of ones property as a form of protection to family and the land itself, they should more correctly be referred to as YASHIKIGAMI (屋敷神)- Household Gods.

Walking around Hojo, I was surprised to see that there was no set corner of the property on which the UJIGAMI/YASHIKIGAMI were placed, despite the facs that most reference books insisted tha they would be in the unlucky north-eastern quadrant.

I asked my neighbors how the position of there household Gods were determined. Most did not know ( because it had taken place before they were born) but those who did said that the Shinto Priest decided, based on his own calculations.

And though the UJIGAMI stones obviously provided no protection to the homes destroyed by the tornado, most of the residents of Hojo still dutifully leave offerings to theirs- mostly in the form of SAKAKI leaves.

Those who were not hit, while their neighbors across the street were left homeless, seem to be even putting out some special treats these days for their Household Gods. 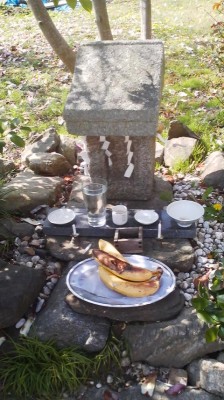 Banana offerings to an Ujigami-Sama in Oda, Tsukuba 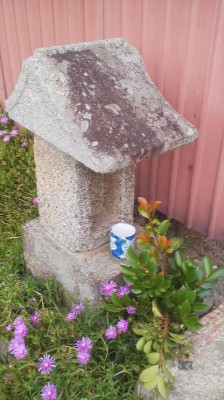 An UJIGAMI SAMA is a part of Hojo unaffected by the tornado. Note the typical offerings of water and SAKAKI leaves ( the dark green leaves in from of the stone. And one thing that I dont want there to be misunderstandings about- the stones themselves are not a deity, but rather a place at which contact with the deity can be made- A mini shrine hall carved in stone 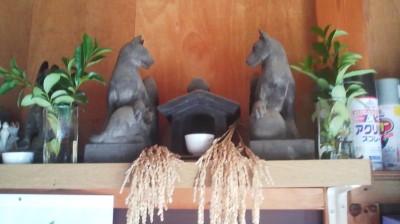 My neighbors` UJIGAMI SAMA (the INARI deity) used to be outside until a workshop was built over it. The family dutifully continues gives offerings to it 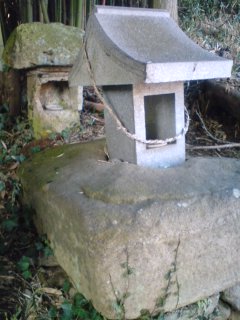