Kids Hair Design CHOKKINS- a Great Place to Have Kids` Hair Cut- but NOT if you are trying to cut costs! 19 July, 2012 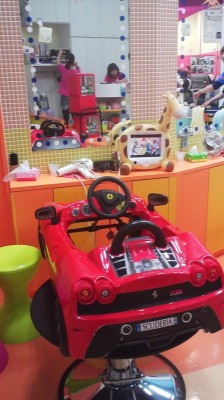 As a kid, there was nothing I dreaded, or resisted more, than getting a haircut. Not even going to the doctor, the dentist, or the shoestore- which also ranked right up there with my greatest childhood dislikes.  Being all constrained in that uncomfortable smock  tied tightly around my neck, the snipping of the cold hard scissors so dangerously close to the ear, and most importantly: having my curly locks- such an important part of my identity, lopped off and dropped limp and lifeless to the floor, where they would soon be callously swept away by the barbers broom.

And I truly believed  (and still do) that  most other boys shared my feelings on this matter.

That is why I was so astonished the other day at the IIAS Shopping Mall in Tsukuba, when my own son DRAGGED ME to the barber shop at which he wanted, yes- REALLY WANTED- to get his hair cut. And I thought that it would have to be me dragging him, fighting all the way  for his summer trimming.

I was even more taken aback  while as I waited for my son to be finished I observed a continuous stream of boys- from kindergarten age through late elemetary school- excitedly enter the shop (ahead of their parents) and then enthusiastically hop into the barber`s chair. It was as if I had entered some parallel universe in which everything I had held to be true was reversed!

But living in Japan ( and in Tsukuba in particular) has shown me time and again that their can be a different way of doing things- and very often a much better way! 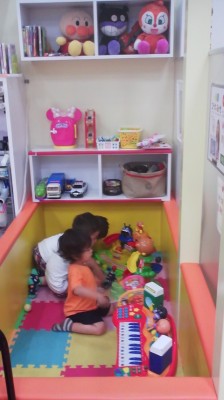 The reason the little lads found the chairs so attractive is that they were shaped as little sports cars! As they got into them a happily giving the steering wheels a few turns, the staff showed them a menu- not of hair-styles- but of DVDs that they could choose from ( thats right, the kids do not sit through the cut watching themselves in the mirror- they are watching Thomas the Tank Engine, Chugginton, or Ultraman!). And there is more! The stylists carts, which carry the tools of their trade ( which I had always found so frightening) also carry toys- actions figures and plastic dinosaurs! Even the walls are enticing as they are decorated with all the most popular cartoon characters.

The place is called CHOKKINS and it is located on the third floor of the IAAS Mall (near the Kenkyu Gakuen Station along the TX LIne). And what they have done is create the perfect atmosphere for attracting their target clientele- kids!

One thing you might have noticed about Tsukuba is the amazing abundance of hair salons. Whole streets are lined with them. Over the years I have found that nearly every time I notice an interesting looking establishement being built , it ends up not being the restaurant or boutique that I imagined it would be- but a hair salon. To tell the truth, I have always wondered how they could all stay in business. I finally just attributed it to the fact that no matter how bad the economy gets the Japanese (men and women) never skimp on trying to look good and keeping in fashion.

But besides the thousand-Yen cut shops which cater mostly to men and have sprung up here and there over recent years, CHOKKINS is the only other barber/hair-salon that I know of which has come up with a unique selling point. 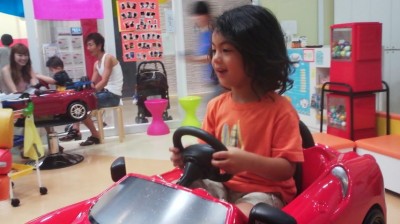 And in a city like Tsukuba which has many more kids per capita  than most other places in Japan I think the people at CHOKKINS have a great idea.

Their staff (all female) have a manner finely tuned to the kids, putting them at perfect ease. The receptionist gives you all the attention so characteristic of Japanese service- with a special kind of intensity and gaze-  and if you have to wait before your kid`s cut there is a very well stocked playing area with some of the latest and most popular toys ( my boys stayed on a long while there after they were finished with the actual cuts).

There are drawbacks to the place, however. The biggest is the cost- which is 3,675 Yen per child- an arm and a leg for a little hair cut off! And then there is the matter of the final result of the stylists work, which left me a bit disappointed. But please do not trust my opinion on this matter- I am by no means a connoisseur of coifeurs!

One thing which eases the pain of shelling out all that dough for your kids haircut is that while you are at the register they print out a picture of your child in his/her new hairdo. But in the end what actually makes it worth the price is the fact that your little one have such a good time at the place- mine didn`t want to leave!

And finally, making CHOKKINS even more appealing in way, was something I noticed on their brochure which I was handed on my way out. Three English sentences which must have been generated by computer. I think they perfectly sum up the shops entire concept:

There is house of a dream

There is an amusement park

The beauty room that there is pleasant