Before and After 3 /11 : An Exhibition of Works by Motohashi Seiichi and Suzuki Koji- at the Tsukuba Art Museum (until July 22) and other related events 20 July, 2012 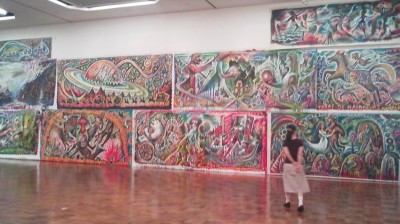 Though they were also part of the exhibition, I hardly glanced at the small colorful pictures, illustrations from children`s books I assumed, which lined the walls of the corridor leading from the entrance of the Tsukuba Museum of Art to its main hall. I was too distracted by what I had spied up ahead- large, alluring  deeply hued canvases hung up densely, nearly covering all the wall space. One particular work, straight ahead and and near the floor, seemed to me from a distance to be three-dimensional. My  curiosity had been stoked.

Entering the large rectangular space I was overwhelmed not only by this mass of image and color which had drawn me in- but also by a jarring contrast – while the longer walls of the hall were fully decked out with the crazed works of well-known artist and children`s book illustrator Suzuki Koji, the shorter walls displayed, on a much sparser scale, some photos of a small village in Belarus. 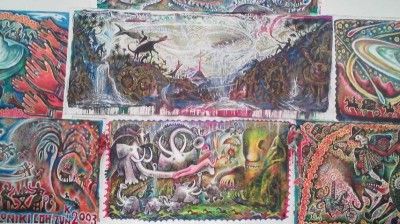 There was so much (much TOO much, in fact) – from floor to ceiling to take in, that I really didnt know where to begin. It took me a long while of visually negotiating the room, and several circuits around it to eventually gain a sense of what I was experiencing- but I still felt dizzied.

While Suzuki`s canvasses reminded me at once of Chagall ( for the village scenery- weddings, musicians, animals- though in colors more reminiscent of the grim, ominous works of Rothko), Heironymous Bosch ( for the wierd imaginary creatures) AND Mexican folk art ( especially that connected with the Day of the Dead), it came to me after afew minutes that these works reminded me most of was what I had seen in books on what is called Outsider Art. 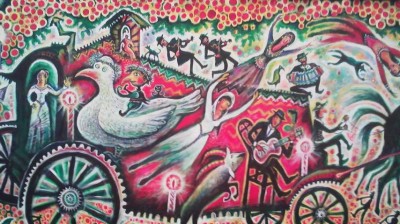 In constrast to this, you had Motohashi`s black and white photos of rural Eastern Europe which at first seem to be mere portrayals of life in some impoverished villages which have apparently not changed very much in the last 200 years. There are scenes hinting at suffering and hardship, but there are also the human moments- the occassional joy ( elicited by music) and even beauty ( in the faces of the children).

What gets you to look at and think about all these images in a different way are  the explanation panels (in Japanese) which are posted on the walls . You  learn from it that this is a village which had been severely irradiated after the accident at the nuclear power plant in Chernobyl. The people in the photos are those who have refused to evacuate and have remained to live with the isolation and the fallout. 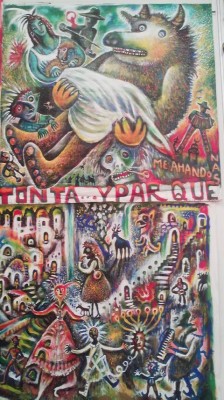 Another work by Suzuki Koji

Just what this exhibition, entitled Before and After 3/11,  is trying to say did not come to me while I was wandering around it. There was just too much (as I have said before)- a veritable three-ring circus. And to tell the truth, I`m still not exactly sure what its all about.  But  I guess that Suzuki Koji, after having looked at Motohashi`s photo`s was inspired to create giant crazed scenes of Eastern European village life as he imagines it, not only as it has been traditionally, but also as an fantastical and nightmarishly mutated post- nuclear holocaust world.

The large paintings reminded me in some way of the old Bob Dylan song A Hard Rains a Gonna Fall which was apparently written at a time when the singer songwriter was in  state of panic over the possibility of an imminent nuclear war. 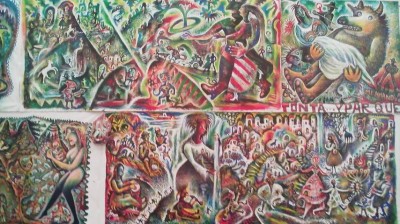 I guess that Suzuki`s works probably do capture, in a way, the present state of our civilzation: half-mad! This was brought home to me by the news that I heard on the car radio right after I had left the exhibit: The reactor at the Oi Nuclear Power Plant had just been restarted. Like I said: MADNESS! 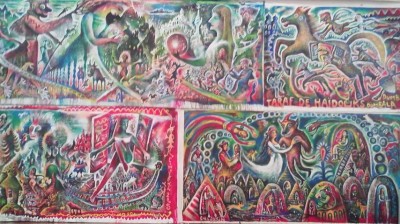 Anyway, no matter what the exhibition is intended to mean, it can certainly be alot of fun, even festive when it gets crowded. Suzuki Koji has some very good taste in music and he acts as a sort of DJ at the showing (years ago I saw Suzuki improvise a large painting while avant garde musicians were having a jam session).

Paper, scissors and drawing materials are also available for anyone (great for kids) who would like to try their hand at making some art ( you might even make something better than Suzuki himself!). 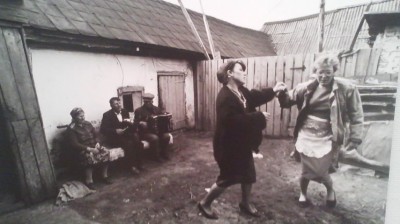 A photo by Motohashi Seiichi

On Sunday morning (the 22nd), in front of Tsukuba`s Expo Center, there will be an event for children (and anyone else who would like to join) to make paper masks. When everyone is finished, Suzuki will lead everyone in a parade (probably to the accompaniment of some interesting musician(s).

And apparently, as part of the same event, works by Suzuki and Motohashi are being exhibited at 23 different locations (mostly cafes) around Tsukuba City. See more at this website:

All of this is going on thanks to Mr. Osamu Noguchi, a former city councilman and the proprietor of what was probably the most exciting musical venue ever to have existed in Tsukuba ( unfortunately long defunct). Noguchi-San has over the years brought many interesting (not commercially popular) musicians and performers over to Tsukuba- mostly to Capio and Nova Halls. After the disasters of March 11th last year, he was at a loss as to what to do. He could not think of an event appropriate to the times (especially in these days of concern for radiation in Fukushima Prefecture and beyond) until he saw the Motohashi-Suzuki Collaboration and felt that it would be perfect to bring to our city. He would really apreciate it if you dropped by the exhibition or one of the other venues which are part of this event. 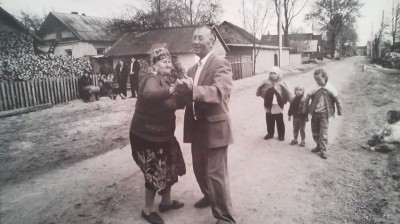 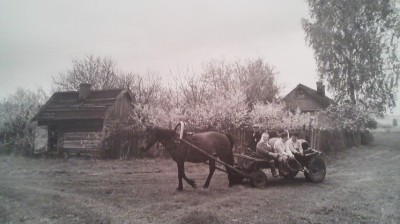 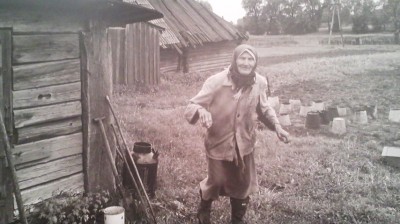 The 4-day event should end on a strong note on Sunday evening with a showing of Motohashi`s film about life in Belarus` forbidden zone. Its title is Alexei and the Spring and you can see it at Capio Hall from 7 pm. The director will be there for a post-viewing question and answer session.