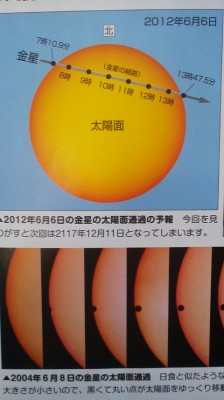 As shown here, Venus will start to pass in front of the sun at 7:10 on Wednesday morning and then slowly make its way across the suns path until the transit is completed at 1:47 PM 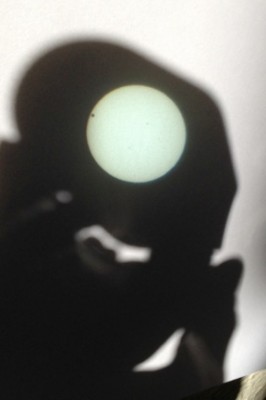 Though densely overcast skies prevented those of us living in the Kanto Area from enjoying any of the Transit of Venus on June 6th, the rare event was clearly visible from Kochi Prefecture on the Island of Shikoku. This picture of a prjection of the transit created with a pair of binoculars was sent to me by Mariko Okumoto

These days I have been wondering how the residents of the this area would be reacting if this were still a pre-scientific age- one in which every unusual natural phenomenon was  seen as a divine message of some sort. With the regular occurence of strong tremors, a killer tornado (May 6th), an annular eclipse (May 21), a partial lunar eclipse (June 4), and then tomorrow (June 6th) a Transit of Venus- in which that planet will be seen crossing in front of the solar orb, I imagine there would be a wave of unease or even panic among the people and the government taking drastic measures in response to the  terrible omens.  Elaborate religious ceremonies would be held, political prisoners released, the Reign Name (Nengo) changed, perhaps the location of the capital moved.

Though we now know that earthquakes,tsunamis, and tornadoes are not the wrath of the Gods, these phenomena remain unpredictable, and a continual cause for fear. They also remain a major concern for governement and public policy makers.

Eclipses and other rare celestial events, however, after their demystification by science have become well anticipated, festive occassions, with plenty of media build up.

And that is why most people who enjoyed last months spectacular solar eclipse have not yet put away their special eclipse viewing equipment. They will be needed for viewing tomorrow`s (June 6th) extermely rare TRANSIT OF VENUS, something which will not be observable again from Earth until the year 2117. 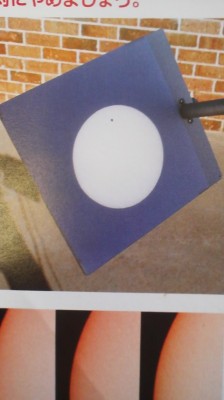 However, those who plan on using their eclipse glasses should be forewarned. Only those with the sharpest eyesight will be able to make out the tiny black dot of venus as it makes it way across the disc of the sun using these glasses. The effort of trying to do so might also be tiring and cause dizziness.

That is why the best why of enjoying tomorrow`s 4 hour long event will be by setting up a projector of some sort. You can use either a piece of paper or cardboard with a pin-hole in it, or a telescope or pair of binoculars (DO NOT LOOK DIRECTLY AT THE SUN WITH THESE) to create large and clear images of the TRANSIT onto a screen of some sort.

For those without the time or or desire to sit through all 4 hours ( or any) of tomorrow`s event, there is an animated version which has been uploaded onto wikipedia in which the whole thing, can be seen exactly as it will occur- but all in about 2 seconds!

And if the weather turns out to be overcast like it is today, we will all have to turn to this version to try to get a sense of what we missed.