Plains, Place-names, Tornadoes and Dragons- why the Japanese call twisters TATSUMAKI ( Dragons Swirls) and other post-storm thoughts 14 May, 2012 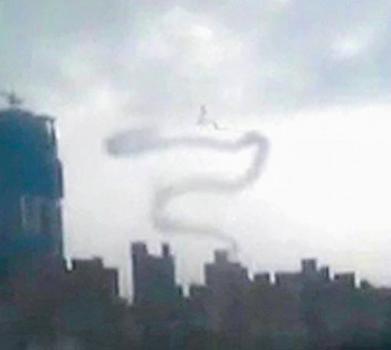 The Chinese dragon dances (seen at festivals), in fact the ancient belief in the existence of dragons themselves, are based partly on twisters which looked like this one in Taiwan

Shortly after recovering from the shock of coming home from Tokyo and finding my neighborhood wiped out by a tornado, I remembered that I had in fact mentioned tornados in a TsukuBlog post that I had written earlier this year. Strange, isn`t it? I mean, one doesn`t usually associate Japan with tornadoes- so why would I have discussed them in a blog which deals with Japan and Japnese culture? Was I being prophetic? No. But still, when I remembered what I had written, I realized what a strange coincidence it was that a killer tornado had struck Japan in the year 2012. Why? Because this year is the Year of the Dragon (TATSU DOSHI) according to the Japanese and Chinese traditional calendars- and that was what I had written about: Dragons in Japanese History and Culture. 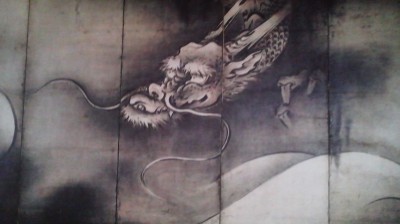 One of the things that I had wanted to try and understand while researching for that article was why an IMAGINARY creature like the dragon, would have been included among the 11 other REAL animals of the JU-NISHI (十二支) , the Oriental zodiac which has played such a prominent role in East Asian Culture (used not only as motifs for art, but also to represent the 12 months of the year, the days of the month, and the hours of the day, etc.).

The most convincing answer that I could find was that in the minds of the pre-scientific Japanese and Chinese DRAGONS DID REALLY EXIST- and could occassionally be seen- connecting the heavens and earth and twisting gracefully over the land while often exhibiting immense power and awesome beauty. What was being observed was in fact what can now be explained as a mere meterological phenomenon which in English we call tornadoes. The ancient Japanese ( as influenced by the Chinese) saw DRAGONS in these storms and called them TATSU MAKI (literally: DRAGON SWIRLS or DRAGON ROLLS)- the word which is still used by the Japanese today to refer to twisters. 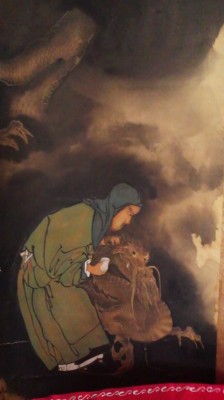 I was even able to find a relatively recent text by the Edo Period physician and man of letters Tachibana Nankei (1753-1835) in which he details several dragon sightings made during his travels around Japan. The phenomena he is describing, however, are obviously ( to the contemporary reader) tornadoes. ( the occassional discovery of mysterious and sometimes gigantic bones- which we now no to be fossils of extinct dinosaurs- also helped lend credence to people in past ages to the fact that dragons existed).

So now you can understand why I found it such a strange coincidence – that a major destructive DRAGON SWIRL (TATSUMAKI, 竜巻) of historic proportions (in Japan) should have occured in the Year of the Dragon.

And though very destructive TATSUMAKI are very rare in Japan, they do occur in milder forms every year- with some years having more twisters than other ( there were 37 in 1976 and only 4 in 1984), mostly in coastal regions or on the larger plains.

Tornadoes form more easilly and powerfully over flat land. That is why many of the greatest cyclones form over America`s vast Great Plains. It is also why the country which has the most tornadoes per square mile in theworld is the country most famous for being flat- The Netherlands (Holland)!

So naturally, in Japan, a country which is mostly mountainous, the area in which the most torandoes are generated would be its largest expanse of flat land- The Kanto Plain. Tsukuba happens to lay right in the middle of that plain. That is why when there are tornadoes in Japan, they happen around here ( and we should probably prepare for more in the future).

That`s just great for us here, isn`t it? One more thing to worry about. Another form of impending natural disaster to dread- besides the earthquakes, typhoons, floods, electrical storms and landslides. 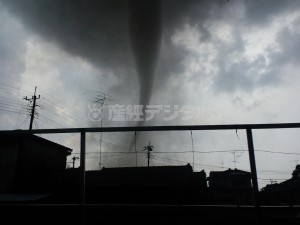 The tornado approaching Hojo on May 6th 2012

Evidence that this part of Japan has long been a brewing ground for TATSUMAKI can be seen in the name of a city not too far from Tsukuba. I`m talking about Ryugasaki (竜ヶ崎, literally Dragon Point) suffered from tornado damage a few years ago. Its name , however, reveals that there have probably been repeated sightings of DRAGONS in the Ryugasaki area over the centuries- as according to books on local history it derives from sightings of the mythical creature. ( It is also interesting that the residents of Ryugasaki REFUSED to have a station of the Joban Train Line pass through their town when that railroad was being constructed- to them the steaming machines were like overheated suffering dragons!).

Read more about dragons and Japanese culture in my past post: 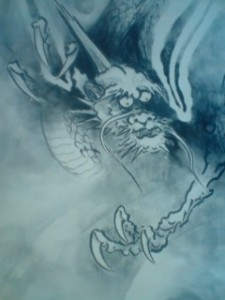