Getting Excited (and stressed out) about Tomorrow`s Rare Annular Eclipse 20 May, 2012 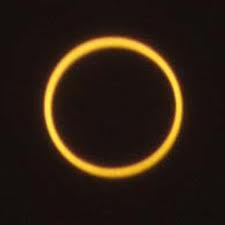 An annular eclipse, in which the sun`s rays shine out ring-like from behind the moon, will be visible from much of Japan`s Pacific Ocean side ( including Tokyo and Tsukuba) on the morning of May 21st 2012. DO NOT LOOK DIRECTLY AT THE ECLIPSE WITHOUT PROPER EYE PROTECTION

Those of us living on much of the Pacific Ocean side of Japan will be in for a very rare treat tomorrow- the chance to observe an annular eclipse- a phenomenon which has not been visible from the Tokyo area in 173 years.Beginning at at 6:19 AM( as seen from Tsukuba), the moon will begin to slowly get in the way of, and obscuring the morning sun. By 7:31 am the moon will have moved directly in front of the solar orb-  though because of the distances tomorrow between the sun, the moon and the earth, it will not completely block out its rays. Thus, for about 5 minutes, those with the proper eye protection ( or specially made pin-hole projectors), will be able to observe what looks like a bright ring around the moon. This ring-like light, this sun-ring, is also called a an annulus, in English.

The sky will not turn to night, as it does with a total eclipse ( something I observed in 1996 from the island of Curacao), though it will darken a bit and the scenery surrounding observers should turn gray.

After the five minutes of annularity, the moon will then begin to gradually move off of the sun (as it appears to those observing).  The whole thing will then be over by 9:02 am.

As you can imagine, many people are getting very excited over the chance of seeing something so rare, beautiful, and perhaps even magical. All kinds of special events have been planned ( in the Tsukuba Area there are those who have reserved spots on an eclipse-viewing cruise on Lake Kasumigaura or those who will take the special eclipse-day early morning cable-car service to the top of Mt Tsukuba). Evidence of this great interest is the fact that all the special viewing glasses which are essential for viewing the eclipse have long been SOLD OUT!

And that is why as the eclipse approaches I have been stressed out! Imagine not being able to see the eclipse because you forgot to prepare the proper ( and very cheap) equipment

Since the beginning of the year such glasses ( which usually come together with a booklet on eclipse information) have been on sale at bookstores and electronic stores. It seems, however, that supply has not kept up with demand ( remember trying to get a geiger counter in the months after the Fukushima nuclear accident?)- and running around frantically from store to store yesterday, I could not find a single pair of eclipse-viewing glasses!

I will continue my search today, at Tsukuba`s Expo Center and Planetarium, and at the Geological Survey of Japan. Of couse, I will also try JAXA, the Space Center.

REMEMBER: unlike a total eclipse which can be observed with the naked eye during TOTALLITY, an annular eclipse should NEVER be looked at without proper protection (or a pin-hole projector). Make sure you keep your children from looking at the sun. Maybe, with little kids (like mine) it would be best just to keep them indoors- making sure they don`t take a peek outside.

You want to make tomorrow an unforgettable experience- something which will remain etched in your mind`s eye-  without any permanent eye-damage! 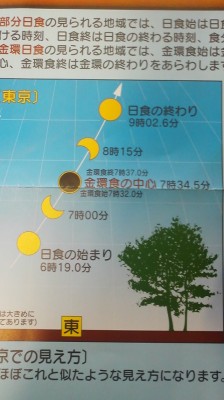 And even if the skies are not clear tomorrow don`t give up ( or stop using your protection!)- you should still be able to enjoy the eclipse though the clouds. I know that this is true from an experience with a partial solar eclipse which was visible in Tsukuba a couple of years ago. Read about that experience here: 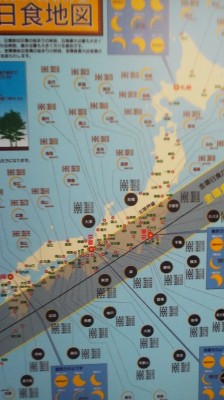 A photo of a map which came along with the special eclipse viewing glasses that my friend had bought- I was too late- they were already all sold out! Note how the Tokyo and Tsukuba sit right in the most optimal viewing zone

I have also written an article on the possible connection between solar eclipses and Japanese mythology and culture. Read it here:

And if you do happen to miss tomorrow`s event, due to oversleeping or a conflicting schedule, have no fear- you will get another chance at seeing an annular eclipse from Japan`s northern island of Hokkaido, on June 1st- the year 2030! 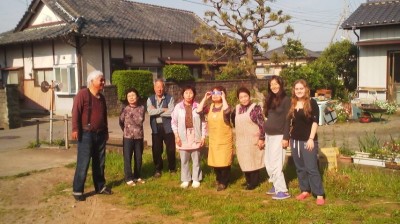 In the queer light created by the annular eclipse, neighbors gather in our garden to enjoy the rare phenomenon- by passing around a single pair of eclipse-viewing glasses that I miraculously got my hands on the previous night!

Next time I will remember to prepare for such a major event long in advance. With the day before the eclipse being the great Sanja Matsuri Festival in Asakusa, I ended up having no time to look for the necessary glasses as I had planned to do. Thus, as always seems to be the case with me, I ran around frantically from bookstore to bookstore and convenience store to convenience store only to find that all the glasses had been long sold out.

I almost resigned myself to watching the rare phenomenon on TV, when at about 9:30 PM I got a call. It was Kayoko Takahashi of the Society to Protect the Konda Dai Ecosystem. To my amazement, she asked me if I needed a pair of eclipse glasses! Deus ex Machina!

We got up bright and early and checked the weather. Near perfectly clear skies. At 6:18, the scheduled onset time of the eclipse  I took my first look at the sun from one of the windows in my house with my newly acquired glasses. Even with their filtering powers, I felt a bit woozy after a short glimpse.

Not only were the skies clear, but the temperture was optimal, as well. I stepped outside, and greeted my neighbors who were working in their yard. I showed them my glasses. They were surprised that I was able to get my hands on a pair, since they have had tried to do so, but to no avail. I let them have a look . The orb of the sun was already being partially obscured by the moon passing in front of it and they seemed thrilled. As more neighbors passed by, we called them over for a look. Soon we had a veritable eclipse viewing party going- as we passed the glasses around and around for short glimpses of the sun`s continually changing status.

At about 7:30, with our surroundings dimmed-  as if we were viewing the world through slightly tinted glass, the excitement reached its peak, as we each cherished a few short glimpses of the SUN RING, as we passed the paper and plastic glasses around.

Though not as mysterious as a total eclipse- with its strobe-like BAILEY`S BEADS effect, and the dramatic sight of flocks of birds suddenlly fooled into dropping down to roost in trees as the day falls into a temporary night, todays annular eclipse still, beautiful and impressive……. unforgettable- and despite those cheap glasses…….. emblazoned on my retinas.

And I just have to mention this thought that I had. How would the prescientific Japanese have reacted to all the rare and dramatic natural phenomenon which occurred recently- coming on after the other……….. earthquake, tsunami,tornado, eclipse,,,,,,,,? 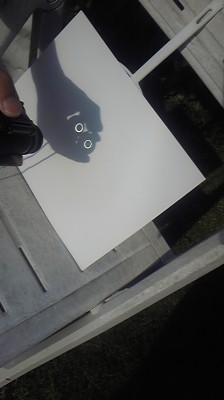 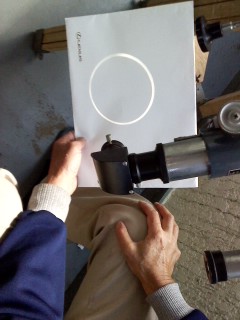