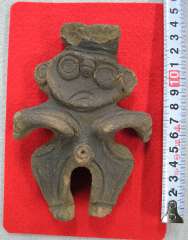 A nearly intact 3,000 year-old DOGU clay figurine which was unearthed at the Asahidai Kaizuka Shell Mound in Tsukuba

For the members of our group, the Society for the Protection Konda`s Ecosystem, the news seemed an amazing coincidence. Just a few days ealier, as part of our monthly history and nature walk, we had taken a party of about twenty to see the Asahidai Kaizuka Shell mound, at the edge of the Konda Woods. This area, strewn with shells, pottery shards, and assorted animal bones, is the site of an ancient trash dump used by the early inhabitants of this area ( about 3,000 years ago) to discard the remains of their meals and other objects which they no longer needed. It should seem obvious that this would to be an invaluable place to learn about how our predecessors in this part of Japan lived. This is obviously not true for  everyone, however, as the construction company UR , which owns the land, has plans to build over this site. We had specifically gone there to show concerned citizens what was going on, and how what we believe to be an important part of Tsukuba`s heritage was going to be quietly paved over. Naturally, those who we took to see shell mound for the first time were impressed and concerned about what was going to be lost. So when on  the following Friday ( our walk had taken place on the previous Sunday) the media announced that there had been a MAJOR FIND at the site- an almost completely intact DOGU clay figurine- we could not help but feel that our concerns had been validated. 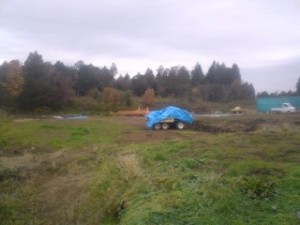 The newspapers announced that the 3,000 year old figurine would be revealed to the public ( along with other artifacts which had been unearthed at the site) on the following day ( Saturday Dec. 3rd) at the Kaizuka itself.

The next morning, despite it being cold, wet, and  miserable in general, there was excitement in the air. Dozens and dozens of cars came to park in the fields that became temporary parking lots at the edge of the woods. More than 120 paople eventually crowded into the prefabricated structure which is the office used by the archeoligists doing the mandatory pre-construction survey of the site. There was plenty of OO-ing and AA-ing when the DOGU and other newly inearthed artifacts ( the most impressive of which were large ear ornaments) were revealed.

Besides getting a close look at the ancient figurine and getting a detailed explanation from specialists, those present were invited to touch and hold the mysterious object ( which will probably be designated an important cultural property. 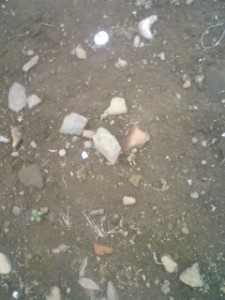 Taking a look at the ground as you walk in the area, you will it strew with shells and pottery shards

Dogu (土偶) is the name given to distinctive human-shaped clay figurines ( usually portraying the female form) of various styles which have been unearthed at sites throughout much of Japan ( the first record of a DOGU having been discovered was in 1623 in what is now Aomori Prefecture).

When the fields of archaeology and anthropology were introduced to and started to develop in Japan after the Meiji Restoration of 1868, over the years specialists have divided these figurines ( which were created over a period of THOUSANDS OF YEARS- from 8,000 years ago- 2,500 years ago), into different types.

The earliest were merely what appear to female torsos ( without head or limbs), discovered in what is now known as the Kanto Region ( around Tokyo, and including Tsukuba). 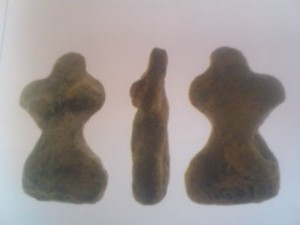 A front, side, and back view of the earliest type of DOGU- what appear to be simple female torsos. This type has been dubbed the VIOLIN TYPE DOGU

As the centuries and millenia passed. DOGU culture spread and  styles varied with time and location. 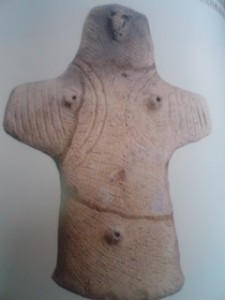 The next stage in the DOGU`s development showed heads arms, legs, and holes in various strategic spots ( this was uneathed in Aomori Prefecture) 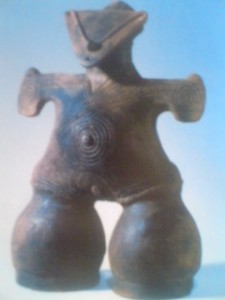 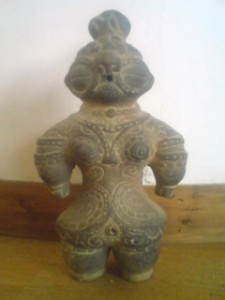 It is easilly imagined how DOGU like this could spawn UFO visitation theories, but the designs on the body probably full-body tatoos. But why the big eyes? 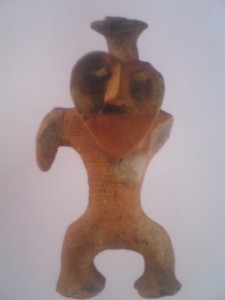 The Asahidai Kaizuka DOGU can be classified as a MIMIDZUKU type- which was popular in the Kanto Area around 3,000 years ago. These are characterized by round or oval shaped mouths and eyes ( though this one has a POUTY mouth!). 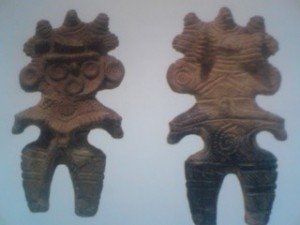 HOW WERE DOGU USED?

Just what these DOGU were exactly made for nobody can say for sure. Going to a university library one can find an amazing number of scholarly papers on the subjet. Some suggest they might have been used in prayers or ceremonies for fertility. There are those who have believed that they were toys, or ornamental objects, or a medium of exchange. but as I have said there is no way of knowing just what these often bizarrely shaped figures were made and used for. The most interesting idea for me ( which shows continuity with later Japanese civilization, is the idea that these figurines were used as scapegoats into which ones sins are cast. The figurines themselves were then smashed or discarded, thus ridding humans of sin and impurities. Even today, dolls are used in Japan in such a way. See my article:

Personallly I find pondering this mystery quite challenging and whenever I`m at the Tokyo National Museum in Ueno for a special exhibition I always make sure to drop by the DOGU displays and try to imagine for myself what they must have meant to the ancients.

DOGU have also had an impact on certain Japanese artists who have searched for a way to be remain distinctively Japanese artists while working in Western created styles. The most notable of these is Okamoto Taro, whose sculptures ( including one at the TX`s Bampaku Kinen Koen Station) are sometimes simply large and uniquely colored renditions of DOGU.

The Ibaraki born artsit Enokido Shouei ( recently shown at the Tsukuba Art Museum) also incorporated DOGU into some of his more interesting works. 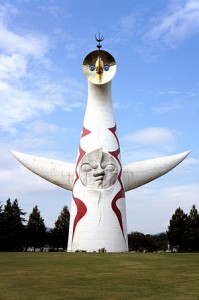 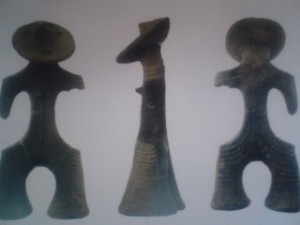 Which derive from these HEART-TYPE DOGU discovered in Ibaraki Prefectire 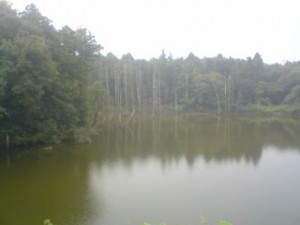 This pond was created years ago when a road was built nearby- it has long provided a resting place for migrating birds and beneath its waters lie the rest of the shell mound!

Getting back to the Asahidai Kaizuka Sell Mound. I hope that nowmore eyes will be opened and more support given to the idea of preserving this area, for further investigation and for the enjoyment of future generations.

And one thing that must be made known is that much of the shell mound lies beneath a pond. There were no plans to excavate there, as the city says that they have not been given permission by the owner. Checking with the land registration office, ho.wever, we discovered that the land under the pond is owned by none other than the UR construction company!

With the recent exciting find, however, it is probable that excavations can be continued and broadened 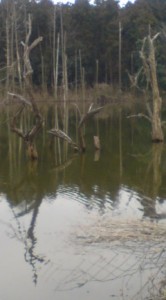 Hard times ahead! If things go according to the plan of the construction company UR, this pond will be drained and the soil hardened with chemical agents. The problem is that they are trying to cover up the fact hat a large portion of the shell mound ( kaizuka) lies under this water. 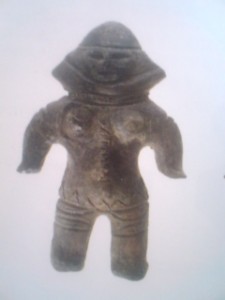 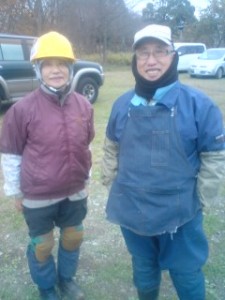 The thrill of discovery! Two of the workers on the excavating crew showed their enthusiasm as I returned to the excavation site on Tuesday Dec. 6th for another look at the DOGU 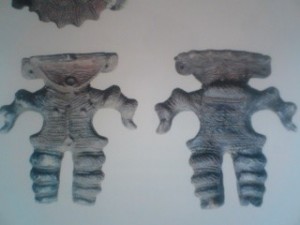 Dogu dug up in Chiba Prefecture- What could these bizarre figures possibly have represented?

If you`d like to see ( and touch) the Kamizakai Dogu for yourself ( before its put behind glass at some museum, these excavation office will be at the site through December, and open on weekdays.

And dont forget the next Nature and History Walk in Konda- which will be held on the 4th Sunday of January. We will meet in front of the gym at the Former Sakura Branch Office.