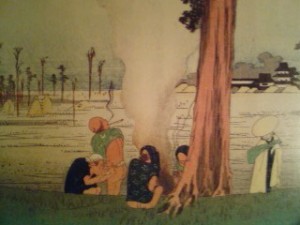 More than once, I have written about the nuisance created by farmers (and others) burning their agricultural waste or household garbage, thereby smoking up what would otherwise be the delicious air of the countryside. It has been pointed out to me that traditionally, these bon-fires were a way of easily getting rid of the useless by-products of the farmers labors, and also of restoring minerals to the overworked soil.

Looking further into the history of this custom, I have concluded that there is another reason for its having arisen and for its survival (in diminished scale) to the present day. Bon-fires were a way of KEEPING WARM in a country in which houses were unheated (except for the dug-out areas beneath the kotatsu table where legs and laps were warmed). Small bon-fires (TAKIBI — 焚火) were a ubiquitous feature of roadsides, fields and gardens. On cold days people would gather round for a chat and maybe even get some sweet potatoes roasting in the fallen leaves and twigs which were used as fuel.

I have found an amusing woodblock print showing travellers enjoying the warmth of such a fire. It is by Utagawa Hiroshige and can be found at the the Prefectural Art Museum in Hagi, Yamaguchi. The man in the loincloth warming his posterior reminds me of an evocative haiku by Nomura Kishu (野村喜舟, 1886-1983) which reads:

Looking at the mountains, as he warms his buns-  a man by the bon-fire
(my translation)

The more I think about it now, the more sense it makes. Instead of getting all upset about my old neighbor smoking up the air and besotting my hanging laundry, I will get out of my freezing house, bearing a gift of sweet potatoes, and join him, snug and warm, staring, as if hypnotized, into the flames.

I have written more on the bon-fires of Japan`s countryside here: