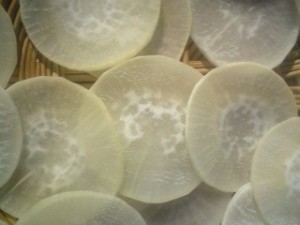 Slices of daikon radish drying in the sun ( Hojo, Tsukuba 2011)

On winter mornings, the first thing I do when I build up the resolve to jump out from under my warm and snuggly covers and into the frosty air of my unheated house, is rush down the stairs- shivering all way- and lug open the big old heavy wooden gate at the entrance-way, letting sunlight flood through the glass doors.

Standing in this warmth, I then gaze at the scene outdoors ( as I thaw out), something which is often as (heart)warming as the sun itself- large gray herons, dazzlingly blue kingfishers, elegant egrets and the occassional bird of prey- all taking advantage of the small creatures which live in the little river ( actually an old irrigation canal) which runs in front of the house.

On one such morning in mid-December, I noticed something ELSE as I stood by the front door- at the edge of the neighbors` property three baskets full of something which was apparently left to dry in the sun. It was in fact quite dazzling with sun reflecting softly off them.

Without hesitation I slid open the glass doors and headed towards the baskets for a closer look- they were thin slices of daikon radish!

My neighbors, who always seem to be busy from the crack of dawn- doing garden work, washing the car, burning refuse- were right where they usually were- around the house. So I could quickly find out what they were making.

It was the first step in the process of making a special dish for New Year`s- onr that has been handed down for generations by my neighbor`s family ( from the wife`s side). 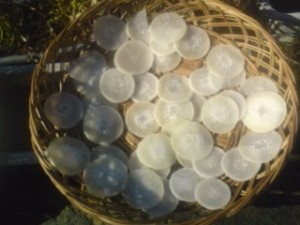 Born and raised in the next village ( a little closer to Mt. Tsukuba)- KANGORI 、Mrs. Shirai has been making this dish ( one for which she does not know the name!) every December since her coming over to Hojo after her marriage nearly fifty years ago.

Here is how she does it.

Slice daikon radish into thin circles the sun for 5-7 days ( dont leave out on cloudy days).

When sufficiently sunned, soak in water for a few hours and thoroughly rinse out.

Sprinkle a  little sugar and vinegar on the radish slices .

Dice a little pickled ginger, and mix with a few slivers of yuzu rind.

Cool in the fridge.

You`ll be surprised by how juicy and ZESTY these radish rolls are- made with the most commonly available of the traditional winter products of this area- radish, yuzu, and ginger. 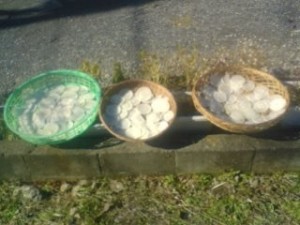 Lucky for me, yesterday my neighbor brought over a dishfull of the radish wraps- in fact, I`m eating them as I write this.
I cant figure out how they can be so juicy. I will have to go next door and ask about the preparation process in more detail.
But now is not the time. Tomorrow is New Year`s Eve and she has plenty of work to do. 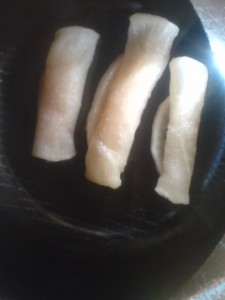 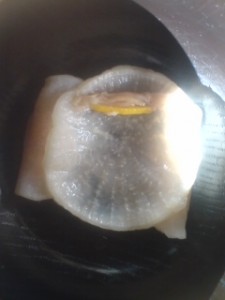 Unrolling it to reveal its contents