From the first time he set out with his newly acquired digital camera back in 2003, photographer Shinichi Ebihara has stuck strictly to a single theme- the birds of Eastern Japan- with a special focus on his home prefecture- Ibaraki.

An area of varied habitats and situated along important migration routes, this region is blessed with an abundance of species- some here all-year-round, some for a season or two, and some just passing through, but ALL making Ebihara-San`s life endlessly exciting.

Ever since he quit his regular job shortly after he took up shooting the local avifauna ( with his camera), he has been off to in-season birding spots 3- times a week and this has enabled him to have regular solo exhibitions several times a year (while he supplements the income made with his photos by working part-time on the other days). 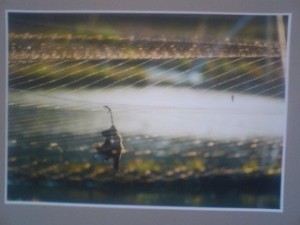 A single bird, one of hundreds in the area on any given day, dangling from the nets over Tsuchiura`s lotus root fields ( a photo by Ebihara-San

But alas. the situation for birds in Ibaraki Prefecture is not one which can be captured merely in pleasing pictures, and Ebihara-San, or anyone else who has gone out of the way to seek out the nature of Lake Kasumigaura`s North-Western shore ( in the villages of Okijuku and Tamura in Tsuchiura City) cannot help but notice something terribly, terribly wrong- thousands of birds, dead or dying, hanging by the foot or wing in nets which the farmers have put up to ostensibly protect their lotus root fields. 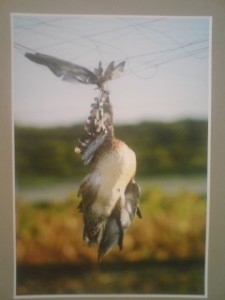 And this is why I think that Ebihara-San`s latest photo exhibit is his most important to date. He not only shows the usual charming are beautiful shots of the local birdlife- but he has also included a few shots (out of a total of 48 in the show) of what is going on down by the lake.

In addition, he has included quite a few photos of artificial bird images, those which can be found all around us, whether sculptures of owls ( Tsukuba City`s mascot) or birds molded onto manhole covers ( as he discovered in Abiko City).

I also found these shots provocative. It got me thinking that in their minds, or in their hands as figurines or cartoon characters, people have a fondness for certain birds deemed beautiful, cute, or well-voiced. In real life, however, these same birds get very little love or concern, as habitats continue to be destroyed (As a prefecture, Ibaraki now has the second lowest percentage of forest cover in Japan- after Osaka).

Read more in my previous post on OWL in the Tsukuba area: 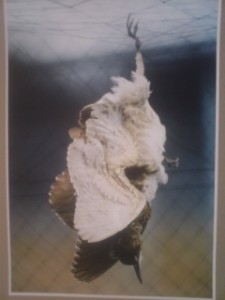 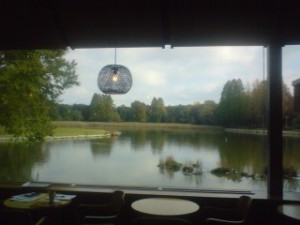 The Ahiru Cafe- where customers can enjoy coffee or a meal and BIRDWATCH at the same time! If you are lucky you will see a kingfisher or two from the comfort of your seat

Ebihara-San`s latest show is being held at Doho Parks rest house ( adjacent to the pond, just south-eat of the swimming pool and gym). It will run through Thursday November 17th.

Not only is admission free, but the photographer is giving away postcards as well.

If you do stop by, I would strongly recommend having tea or coffee or even a meal by the window at the Ahiru Cafe, run by the very freindly Suzuki-San. The view is wonderful and if you are lucky you will see some intersting birds- many even a kingfisher!

All in all it should get you interested in this area`s birdlife- its variety, beauty, AND its associated problems particular to the region.

You can find lots of photos here. Some of them are really interesting. 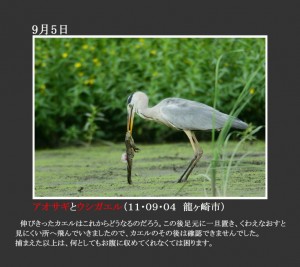 And for more on our efforts to help the birds of Kasumigaura and bring down the deadly ( AND useless) nets, read: