See the Iwasaki-Ya (岩崎屋) an Extant Meiji Period Shop, from the INSIDE, as it serves its last weeks as Hojo`s Tourist information Office (until Nov. 20th) 6 November, 2011 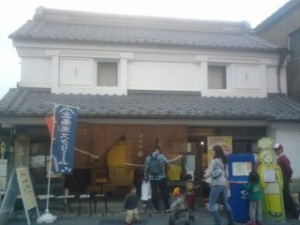 Visitors to Hojo, an old town located in the northern part of Tsukuba City, congregating in front of the Iwasaki-Ya, one of its better preserved old shops

The quietly rusting old town of Hojo, now a lonely backwater in the northern part of what is now Tsukuba City, enjoyed great prosperity from the mid 19th Century through the first decades of the 20th. This is evidenced by the existence of numerous MISE KURA (店蔵)- grand old shops with accomanying residences and store-houses, all made with very thick fire resistant earthen walls- which line its main commercial street. These were extremely expensive to make at the time, and still stand as a testament to the golden-age that once was, when there was a Hojo train station which brought crowds of shoppers from the surrounding area and throngs of pilgrims to Mt Tsukuba ( Hojo was long one of the gateways to this famous mountain) from throughout Japan. 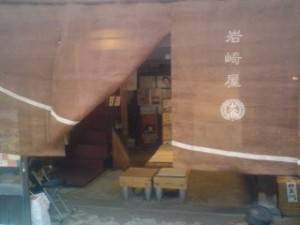 A peek through the NOREN ( entranceway curtain) at the old Iwasaki-Ya, which has been serving as Hojo`s Tourist Information office, and will do so till the end of November

The main commercial street, which runs from west to east and for most of the way at the foot of the little mountain (hill?) known a JO-Yama ( which blocks out the view of nearby Mt. Tsukuba), is called the SHO-TEN GAI in Japanese, and it probably took the form that it has today during the Kann`ei Period (1624-1643), when the 3rd Tokugawa Shogun- IEMITSU (家光) decided to put a large amount of money into building up the Chuzen-Ji Temple on Mt Tsukuba. It was believed that this temple ( which stood where the Mt Tsukuba Shrine now stands) protected Edo Castle- home of the Shogun- from the unlucky North-East direction ( KIMON). Since all the man-power and material for this undertaking passed through what is now Hojo, goods roads were made, some of which ( including the SHO-TEN GAI) still exist- though they have RISEN in height dramatically! 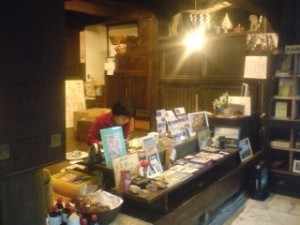 The interior of the old shop is still intact and offers not only a place for travellers to rest their weary feet and enjoy some complimentary tea, but also a chance to purchase or sample some local products- especially the Hojo Mais cream ( pronounced MICE CREAM)- an interestingly textured ice cream developed by students of Tsukuba University which is made useing Hojo Mai- the areas famous brand of rice

Walking down the SHO-TEN GAI today is a great way to get acquainted with late Edo- early Meiji Period town architecture. The earthquake of last March certainly did alot of damage, and even before that fatefull day, time had taken its toll in varying degrees on different structures. Still it is a charmingly rustic street with plenty of traditional Japanese beauty and photo chances. 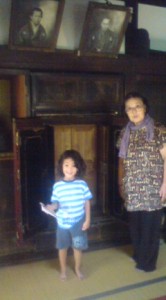 Takemori-San ( right), a local volunteer very active in promoting the preservation of Hojo`s old buidings and customs, giving a tour of the iwasaki-Ya`s back room. The portraits above the old safe are not photos but paintings- as the locals in past ages were hesitant to have their photos taken

Tomorrow (Sunday November 6th) will be the last day of the Autumn Festival at the Foot of Mt Tsukuba, during which several of Hojo`s old houses and shops have been open to the public.

One old shop which most visitors to drop in at is the Iwasaki-Ya, which was originally a sake shop, which converted into a rice shop which grew prosperous dealing in HOJO-MAI, this area`s famous brand of rice ( originally known as the MARU KITA MAI brand).

Things were so good in the old days, that at one point, the Otsuka Family ( who have always owned the shop) had SIX store houses on their property! 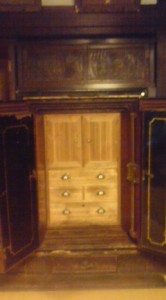 The wife of the latest scion of the Otsuka Family has always believed it important to preserve her husbamds family`s heritage, and not only has she had the old place cleaned up over the years, but also agreed to have the old shop building used as a Tourist Information Office ( and resting spot) which is open everyweekend. 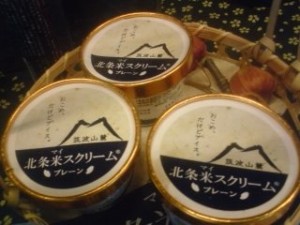 There, visitors can admire the original shop interior, made of beautifully grained wood, and examine the back room with its old safe and some distinctive architectural features ( check out the ceiling). Upstairs are a few old photos of Hojo on display (wish there were more!).And out front they can also enjoy some complimentary tea, or have some Hojo Mice Cream, an interestingly textured ice cream developed by students of Tsukuba University which is made using the local rice (300 Yen). Local products are also there on sale, and everyone is warmly welcomed by the volunteer staff who truly exhude a sense of pride and love for their little home town. 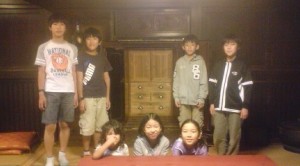 Because of the general enthusaism exhibited by residents of the SHO-TEN GAI ( and beyond) for the promotion of interest in Hojo, many people are surprised to hear that the Otsuka Family will not be lending out old shop as a tourist information office and resting spot after this November 20th. 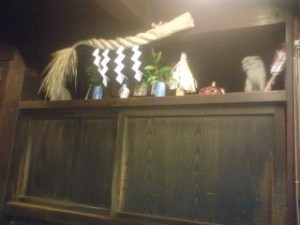 The Shinto Altar at the Iwasaki-Ya`s store-front 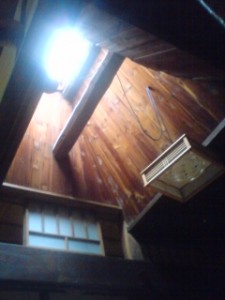 The interesting ceiling feature in the Iwasaki-Ya`s back room

This sad fact means that if you`d like to see the old place on the inside you had better get there either tomorrow or in the weekends or holidays remaining this month. 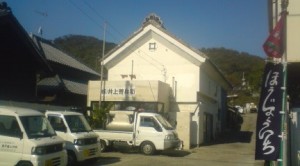 Just down the road from the Iwasaki-Ya ( to the east) is this charming old building- once an oil shop, and now a gas station

If you do make it out to Hojo tomorrow you will also be able to enter the old Miyamoto Residence as well as the old mansion now called Yanaka no Mori which I have written about in previous posts.

You can get to Hojo, the ORIGINAL TSUKUBA, by Tsukubus from Tsukuba Center ( either the Oda or Hokubu Shuttles), or of course, by car.