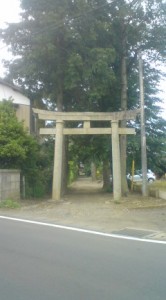 Torii, the gates which mark the entrances to the grounds of Japan`s Shinto shrines, never fail to grab my attention. Like winged doorways which are always open, they lead into a mysterious, exotic space, which when explored can often result in surprising and exciting discoveries- beautiful carvings on shrine structures, unusual offerings left by local residents, rustic old sacred stones which give evidence of religious practices which have died out long ago, and an array of plants and wildlife which find shelter in what is often an areas only oasis of greenery.

Years ago, when I first spotted the concrete torii (鳥居) by the JA Bank in Tsukuba`s Onogawa neighborhood, I headed right for it without hesitation. This little detour turned out to be even more rewarding than usual. Not only did I find a veritable treasure house of local folk customs and beliefs within the precincts of the Kashima Shrine ( to which the worshippers path beginning at the gate leads), but I also came upon something which I have rarely encountered on my shrine explorations in Tsukuba- and something that would become a regular part of my life here- an old country store- The Higano Ya! 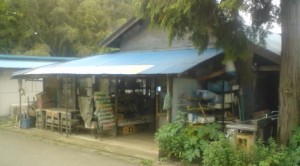 Especially now, as giant ( by Japanese standards) shopping malls  and housing complexes have  come to dominate Tsukuba`s landscape- making life a cold, generic experience, I find the simplicity and good old country hospitality at this little tin-roofed store to be a breath of fresh air.

Whenever I can, I make sure to drop by for a drink, a snack, and maybe a fruit or two ( which is about all they ever have in stock!) 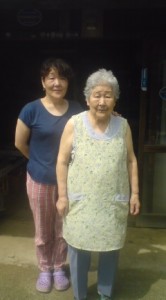 Walking under the torii gate by the above-mentioned bank, with its impressive (and unusual for this region) old stone warehouse, you might be disappointed (as I was) to find that besides a single row of tall trees on both sides of the pilgrims` path, the rest of the sacred grove has been cut down to make room for single family homes.

But dont let the lure of the shrine building, beckoning straight along the path up in the distance make you hurry. If you do, you will miss the rustic old structure off to your left (as you reach a little road). With its blue roof and selection of seed packages on display outside, the Higano-Ya looks like something from another era- the Showa Era to be exact.

And that is exactly as it should look, I guess, as the life Mrs. Shitsu Higano ( 84), who founded the business, began right at the start of that age very long and momentous period of Japanese history.

Talking to Shitsu-San, who was born and raises in the nearby village of Teshirogi, and hearing the story of the Higano Ya, one can learn alot about the changes that Tsukuba has seen over the last decades of Showa and first decades of Heisei. 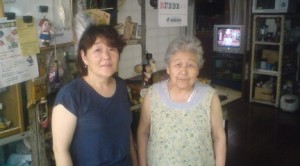 As I have metioned, the store is now sparsely stocked, a few in-season fruits or vegetables, a handful of drinks, some cheap toys and snacks, as well as a selection of soaps, cleansers and detergents. When Shitsu first opened shop, however, it was not a grocery, but a stationary store! And a lively and successful one at that! This is because right around the corner used to stand the Onogawa Junior High School, which until about forty years ago provided Shitsu-San with a steady stream of customers- mostly kids!

Before of the particualr nature of her clientele, Shitsu-San also decided to increase the variety of toys she had on stock. These turned out to be a great hit, and the place was usually alive with lots of good cheer and plenty of excitement.

But alas, everthing changes. And in Japan, one thing that has changed dramatically is the number of kids. With the moving away of the school ( for lack of students) and the general decline in the number of young people in Ibaraki`s rural areas in general, Shitsu-San had to get out of the toy and school supply business and shifted into groceries- on a very small scale indeed.

And though besides the day of the Kashima Shrine`s summer festival , at which the Higano`s man a busy stall selling drinks, customers have become few and far between, old timers, old friends, and some old customers still do get together occassionally at the shop for a good Karaoke session.

And, it still is always a good place to drop in for some good in- season produce and a friendly chat.

The store`s structure, built all those years ago by Shitsu-San`s husband ( who died three years ago) stood up excellently to the recent earthquake.  Anyone who has never been in a traditional Japanese country store will surely find the place of interest- the living quarters are connected and in view from the dirt floor space where the goods are kept in stock.

Sure is a nice change of pace from the mall!

You really never CAN be sure of what you will find when you pass under a torii gate. 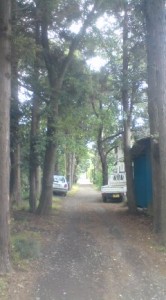 A glimpse down the old pilgrim`s path

So dont forget to continue on and explore the shrine! 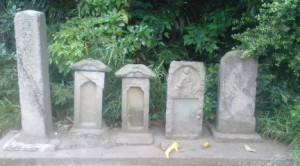 Sacred stones with offerings near the Higano-Ya 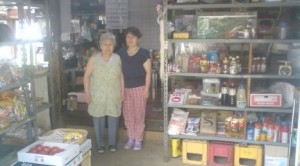 The Higanos in their shop 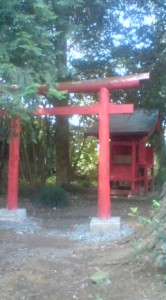 A torii within a torii. A small Inari Shrine stands within the precints of Onogawa`s Kashima Shrine 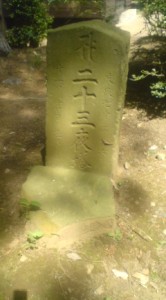 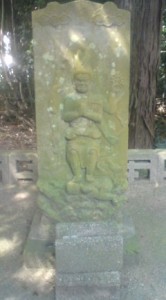 A Ko-shin zuka mound (庚申塚) where all night vigils were held every sixty days in past ages- this was believed to prevent the SANSHI NO MUSHI, from informing the heavens of ones sins. The spot is marked by an image of Sho-men Kongo (青面金剛) 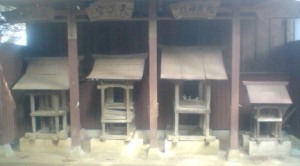 Smaller shrines within the precincts of Onogawa`s Kashima Shrine