Henjo-In (遍照院)- A Buddhist Temple which long served as the Teshirogi Elementary School and in the 1960`s was a base for locals who opposed the creation of the Tsukuba Science City 16 September, 2011 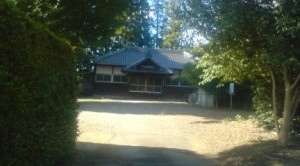 Approaching Henjo-In, a Buddhist Temple which once served as the Teshirogi Elementary School, and served a base for the Anti-Science City Movement, in the mid- 1960`s

The neighborhoods of Matsushiro and Teshirogi  are now considered to be among the best addresses in Tsukuba City, and real estate prices in these areas are accordingly among the city`s highest. The reason for this is undoubtedly the presence of some of the best schools in the region, especially the Teshirogi Minami Elementary School and the Teshirogi Junior High School, whose students mostly come from  extremely education-minded families, those headed by  higher degree bearing, New Resident parents, who have come from around Japan ( and the world!) to Tsukuba to work at its universities, national research institutes, and hospitals. These families now live in the housing develpments which have been expanding in these neighborhoods since the 1970`s when the construction of the new Tsukuba Science City got underway.

Few know about it now, but before this grand national project did get into full swing, there was great local opposition to the idea, especially from the residents of these neighborhoods! But I will get into that later.

Teshirogi, a part of the town of Yatabe Machi (谷田部町) and before that the Yatabe Domain, had been a rustic hamlet whose primary activites were agricultural. If you cross over route 408, the major thoroughfare which now cuts through Teshirogi and Matsushiro, you can still catch a glimpse of what things once looked like-  large, Ibaraki-style farmhouses, shrines, temples, and plenty of sacred stones, surrounded by fields of turf grass, rice, vegetables, and tobacco.

The other day, after taking pictures of the preparations for the festival at Teshirogi`s old Washi Jinja Shrine, I took a little stroll over to a little Buddhist Temple, Henjo-Ji, which stands a few hundred meters away.

Set back into a small grove, and well off the beaten path, this modest old building and its small assembly of stone images is now a peacefull little spot to get away from it all.

If you take a close look at the temple, however, you will see, inscribed onto a wooden board  in front of the main entrance way the words- 旧手代木小学校- which reads- KYU- TESHIROGI SHOGAKKO, which translates as- The Former Teshirogi Elementary School! 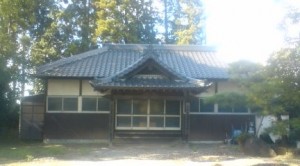 A closer view of the Shingon-Sect Temple

Yes. Since the early 20th century, this building served as a mini- schoolhouse for the local kids. It is an ancestor of its now very prestigious successor- the Teshirogi Minami Elementary School.

A branch of the Onogawa Elementary School was first opened at the temple in 1927 ( Showa 2), and by its final year as an educational facility  (in 1976), still had 6 first graders, 6 second graders, 4 third graders, and five 4th graders enrolled.

Standing in the temple grounds, with the melancholy sound of autumn insects resonating around me, I closed my eyes and tried to conjure up the old scenes of the children, in traditional peasant wear, going through their drills, singing songs, learning to revere the Emperor……. 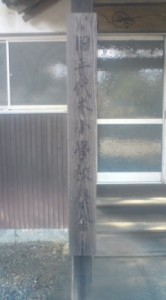 The story of the this little temple ( and former schoolhouse) gets a little more interesting.

When I told Yokota-San, the current head of the Azuma Public Hall that I had been to the temple, his eyes lit up as he remembered the not so distant past.

‘ That was where’, he told me,’ those who were fighting against the creation of the Science City here, raised the flag of resistance!’ 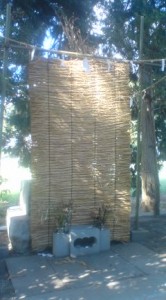 On a hot, sunny day- I found this sun shade behind the temple 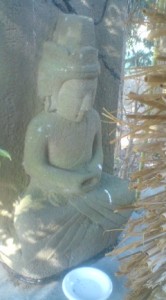 Protecting this image ( a Dainichi Nyorai), from the sun

Resistance to the creation of the science city? What was that all about?

Well, in the early 1960`s, the Japanese government had decided for various reasons to move many government research facilities out of the capital. Of the several candidate locations, the Tsukuba area ( then the towns of Tsukuba, Sakura, Oho, Toyosato, Kukizaki and Yatabe), was selected to be the site of a new Science City ( the other candidates were Mt Akagi in Gunma, Nasu in Tochigi, and near Mt Fuji).

Immediately, oppossition to this plan sprang up. First from the labor unions representing the civil servants who would have to move from convenient Tokyo, out to the  boondocks that this area once was ( and many say still is!).

This particular opposition was quelled by the offer of a TE ATE (手当て), a special subsidy ( extra salary) which would be paid to those who had to endure the hardship of life out in the country.

More passionate resistance to the governments plans, however, came from local farmers- especially those in Yatabe and Kukizaki Towns.

The main reason for this is that the original blueprint for the new science city called for about two thousand farmers` families to be relocated due to road and building construction.

I guess they could not accept the fact that the government could order them to leave their ancestral lands. Anyway, they were surely disatisfied with the price they would be paid for as compensation.

Another important factor must surely have been that the government in Tokyo was proceeding with its plans without lending an ear to the opinions, thoughts and feelings of local residents.

There was also inspiration from the movement to stop construction of Narita Airport- which ended up lasting much longer, more violent, and much better known.

Negotiations and changes in the BLUEPRINT for the newly planned city and the amount of compensation paid to local farmers for their land did lead to a loosening in the anti- science city mood.

You might be surprised to hear, however, that five families involved in the resistance movement, actually packed up and emigrated to Brazil!

On November 30th, 1966 the most virulent opponents of the governments gathered at the Henjo-In Temple to raise the flag of the resistance movement that they would form on that day.

Over the next few months and years these people kept up the pressure and actually harrassed government surveying teams. There were even threats of violence (locals waves sythes at the intruding surveyors).

A few years later, on Aug. 30th 1969 another major meeting was held at Henjo-In. And though some people still expressed strong opposition, it was agreed that compensation would be accepted for property which was needed to build the science city`s roads and research facilities.

Standing within the temples precincts the other day, I wondered what those people who were so against the plans for the Gakuen Toshi think today.

Acting on my thoughts I walked over to a nearby house and called out to a man ( probably in his late fifites) and asked him about those days.

He said that yes, there was opposition, but only really from those who owned no land. He said that the land owners just pretended to be against the governments plans as a show of solidarity with the poorer folk.

In the future, I will try to find out what other people who lived through those times in Teshirogi feel about those heady days.

I would be most interested in contacting those families who emigrated to Brazil. What do they think about their decision today? 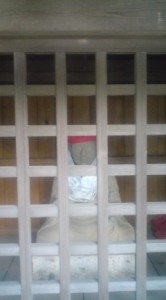 An image of Kobo Daishi ( Kukai, the founder of Shingon Buddhism) peers out of its protective enclosure at Teshirogi`s Henjo-In 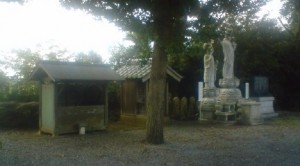 The precincts of the Henjo-In Temple