In the spirit of giving thanks to the older generation, those who sacrificed so much for family, company and society in general( according to the official spiel), and also in the hope that these senior citizens live long, healthy, and FULL lives, the Japanese governemnt created a National Holiday called Keiro-no-Hi ( 敬老の日), which is often translated into English as Respect-For-The-Aged Day, back in 1966 ( apparently having been the idea of the residents of a town in Hyogo Prefecture, in the form of a day created in 1947 called Toshiyori no Hi-  Old Folks Day).

From its original inception as a National Holiday until 2002, Keiro-no-Hi was held each year on September 15th. From 2003 , however, this was changed to the 3rd Monday of September, as part of the policy of creating more three-day weekends for the Japanese by moving several holiday to certain designated Mondays which came to be known as Happy Mondays.

In fact, with the old September 15th date for the holiday still entrenched in our psyches, and another holiday, the autumnal equinox ( Shubun no Hi) usually coming a few days later, late September has now become a major vacation season, given the witty name Silver Week ( as oppossed to Golden Week in May)

Though for most people now this holiday is simply enjoyed as a DAY OFF, there are still those who visit their elderly parents, grandparents, or friends, perhaps bearing gifts of food or even something comfortable to wear, but certainly with plenty of best wishes for good health and longevity.  Many Westerners  (like myself), however, would hesitate paying someone ( a non-relative, I mean) a visit on Old-Age Day, feeling that this might be insulting, by suggesting that you think these people are……. well……OLD-  and not just friends.

Even if a Japanese senior citizen does not get paid a visit by friends or relatives on Keiro-no-Hi, those over 70 year of age, will most probably recieve a little something from their local government or neighborhood committee to celebrate their day. 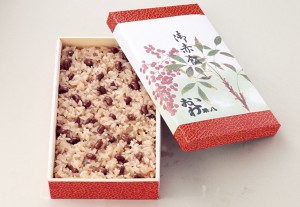 Sekihan, literally RED RICE is served on festive occassions in Japan. The color red as well as beans were believed to have the power to drive away evil. Though now sticky rice ( mochi gome) is used and colored browish by boiling with beans, in ancient times a variety of red rice ( now virtually vanished from Japan) was used for offerings ( and still is at three shrines that I know of)

These gifts most often consist of Sekihan ( celebration rice and beans) and maybe some other sweets as well.

One recent problem, however, is the fact that in this Aging Society, many neighborhood now have many more elderly residents than ever before. At the same time, the bad economy ( and recent disasters) mean that many communities have less money to spend.

I heard about this problem first hand from my friend Miura-San, who is very active in her neighborhood association. She told me that in past year they were able to spend about 1,000 Yen for each local resident over 70, this year, with well over 200 such people in the neighborhood, they would have to try to make do worth 600 Yen for each gift. They have decided to cut out the sweets, and send each Senior a down-sized box of Seki-Han.

I guess in the future less and less will be spent on these gifts in a country where people are living longer and longer, while fewr and fewr chilgren are being born. And unlike most other countries with low birth-rates, there is virtually no immigration here to pump some youth into the work force.

Even in a city like Tsukuba, with a relatively high percentage of children ( in the Science City parts of the town, in the old neighborhood, like the one I live in, its mostly, or almost exclusively, elderly.

In the job market , too, it is probably only in the elder-care industry there there will be a great increase in positions over the coming years.

So during  this Silver Week, lets take a little time out to think about the future of this country, and of ways of keeping it as great as it is ( and one of the great things about it is that older people are so youthful, active, energetic and dependable- as oppossed to the youth!)