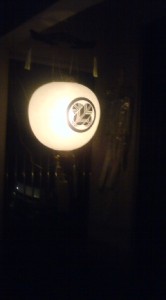 Having just moved into my the old neighborhood of Hojo, near the foot of Mt Tsukuba, has meant learning a lot of things about Japan which are completely new to me. One question that I had had since coming to live here in early August was why so many families have had their O-Bon lanterns ( meant to guide ancestral spirits back to their earthly homes) so many days before the day that the festival actually begins on August 13th.

In fact, MOST of the houses around where I now live have had their lanterns hung up and lit since the 7th of August, nearly a week before the day on which it is believed the ancestors return for their short stay in this world with their families. 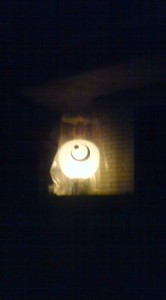 I thought that their might be some special local beliefs which would explain this surprising custom ( though I surely dont want to complain because the lit lanterns ARE beautiful), and finally this morning talked to some of my neighbors about it.

They told me that there is no particular belief for which the lanterns are put out early, but everyone does so simply to express their eager anticipation of the ancestors` arrival. It is just a way of saying WE ARE WAITING FOR YOU.

If you would like to share in the joy of the festival as celebrated in my neighborhood, you can come out this Saturday evening ( August 14th) for some Bon Dancing ( Bon O-dori) outside the Hojo Branch Office of the Tsukuba City Hall ( in Hojo).

I have written more about the O-Bon Festival here:

http://blog.alientimes.org/2008/08/bon-jour/ ( because this year`s a main day of O-Bon will also fall, coincidentally, on the night of a full moon.