Farmer Causes a BIG STINK Near Tsukuba Center- by accidently dropping a load of PIG MANURE at a major intersection! 23 August, 2011 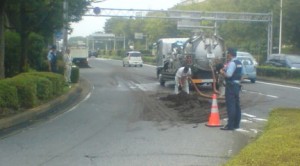 Just another day in the SCIENCE CITY-

I had reached the big intersection on foot, and since the light for pedestrians was red I came to a stop-  right where two of Tsukuba`s most important thoroughfares , Higashi O-dori and The Tsuchiura- Gakuen Line meet. A young women was standing next to me as I waited for the light to turn. Suddenly, I sensed a strong, foul ( yet familiar) odor in the air. I quickly looked around for any trucks carrying pigs or their manure ( a popular fertilizer in these parts) which might be idling ( or on the move ) nearby.

Disappointed not to find the offending vehicle, I noticed that the girl next to me was  wiggling her nostrils in discomfort. She also shot me a glare. I became self conscious,  and was worried that she would think that it was ME who was fouling up the air.

And foul it was! Instead of the passing wiff of PIG which one often fleetingly catches along Tsukuba`s roads, this smell did not dissipate into the air. In fact, it grew to be almost suffocating in the few seconds ( though it seemed like ages!) that had passed.

When the light finally did change, the girl rushed off to cross ( probably trying to get away from me!), while I took my time getting to the other side, carefully looking around to find the cause of the mal-odorous situation.

Eureka! Looking over to the north-western corner of the intersection ( nearest to the Shinonome Grand Hotel) I spotted the source of the trouble ( which had been blocked from view by the azalea bushes growing in the dividers)- a big load of PIG MANURE had dropped onto the road!

Police had already arrived on the scene, and had cordoned off one of the lanes. A clean-up crew with a VACCUUM CAR ( the tank lorries which come to clean out cesspools) was busy trying to vaccuum up the steaming black pile.

None of those on the scene were wearing any masks, and I kind of  felt sorry for everyone involved .

And no, I didnt stick around to ask anybody for the details of the accident!

Anyway, if you too detected SOMETHING IN THE AIR- now you know what it was!

For more on pig manure in Tsukuba read my older post:

Categories: Life In Tsukuba, Off Topic