The Gion Festival Season Gets Underway This Week- with the unique Garlic Festival (Niniku Matsuri),on July 7th, as one of the highlights! 4 July, 2011 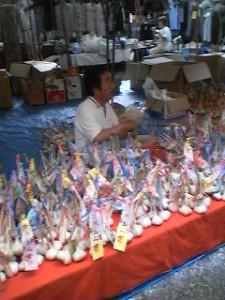 Japanese festivals which take place in the spring or autumn are usually agriculture related. The festivals of the summer months, which take place after the rice planting has been completed and the rainy season gives way to intense heat and humidity, in particular those called Gion or Tenno Matsuri, were originally implemented in order to prevent disease and epidemics.

I have pointed out in previous articles that the chinowa kuguri (straw ring) ceremonies usually held in late June were established throughout the realm by the Japanese Court at Nara in order to help steel the populace for the health hazards of summer. In these ceremonies, to this day, anyone who wishes to can pass through a large ring made of straw or reeds which is believed to provide the necessary protection. I have also explained that the origin of this custom can be found in the story of how the mischievous God Susanoo no Mikoto advised the poor, though generous, Somin Shorai to fashion such a ring and wear it round his waist in order to be protected from an imminent epidemic .

July is the season of the Gion and Tenno Festivals (祇園祭) which now take place all over Japan and at MANY locations in Ibaraki, and Susanoo no Mikoto plays a major role. These epidemic-preventing festivals are mostly held at shrines which are now called Yasaka-Jinja, though they were all formerly called Gion-Sha (until 1868, when the Meiji government decided to separate Buddhist elements from what they deemed to be Shinto shrines). The God enshrined at these shrines is — you guessed it — the Sun Goddess Amaterasu’s brother Susanoo no Mikoto, the deity most closely connected with disease and its prevention. In Japan he is a manifestation of the Buddhist figure Gozu-Tenno (牛頭天王) or Gavagriva (in Sanskrit), who was the guardian deity of the Gion-Shoja (祇園精舎）, the Jeta Grove Monastery built for the Buddha himself in India.

The popularity of this festival and the belief in Gion, or Gozu Tenno (the Buddhist related manifestations of Susanoo no Mikoto), as protector from disease, spread first to Hakata (Fukuoka) and eventually throughout the archipelago. It seems as if almost every town in Ibaraki has a Gion or Tenno Festival organized by parishioners of the numerous Yasaka Shrines (八坂神社) found in the prefecture. Many of them are well worth checking out. 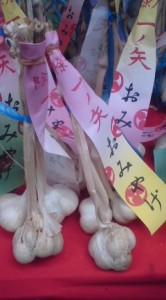 On Thursday July 7th , Ichinoya Shrine, near Tsukuba University, will hold its Tenno Festival, which is nicknamed the Garlic Festival because of its special application of garlic to the task of disease prevention. Until about 30 years ago this was a huge event in the Tsukuba area and all schools were closed. It was not uncommon for Ibarakians to take off from work on the festival day, the 7th day of the 7th month on the lunar calendar. The main attractions were the stalls set up to sell special garlic amulets to be hung outside the entrances of homes. It used to be said that no Tenno (Gion) Festival could be held in Ibaraki, before the Ichinoya Tenno. 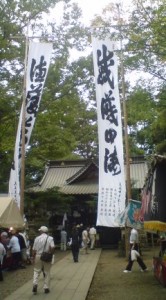 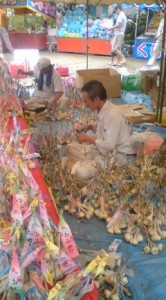 Preparing and selling garlic talismans at the Ichinoya Yasaka Jinja

If you hear fireworks early in the morning, it probably means that a Gion festival will be taking place on that day somewhere near you. Go find the nearest Yasaka Jinja.

If you want to check out or join in on a Gion Matsuri, I would especially recommend the festivals in Ryugasaki (with acrobatics!), Shimodate (taking the portable shrines into the river), Toride, Mitsukaido and Makabe.

It goes without saying that if you can make it you should go to Kyoto  for the “Mother-of-All Gion Matsuri”, with its bizarre, tapestry-laden, disease-sucking floats called Hoko （鉾).

Also on July 30 this year you can experience the ancient rite of CHINOWA KUGURI at the Hie Shrine in the Tanaka neighborhood of Tsukuba city. I have written about this in detail at

I have written extensively about Gion Matsuri style festivals. If you are interested in knowing more – read:

about the huge gion Festival in Shimotsuma (Chikusei-Shi)

and a closer look at my local Yasaka Shrine