Make a Wish Upon 2 Stars at a Tanabata Decoration Near You! (again) The Tanabata Festival Today and in History- a deeper look 2 July, 2011 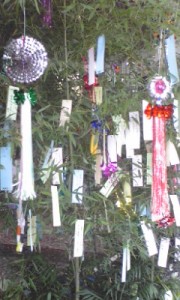 You might have noticed the colorful Tanabata (七夕) decorations-  young bamboo stalks with slender branches adorned with colorful strips of paper, set up at supermarkets, community centers, city-offices, schools and kindergartens around town. If you look carefully, you will also notice a box filled with blank sheets of colored paper (tanzaku), and some pens or pencils which have been placed somewhere nearby. These are there so that anyone so inclined can write down their wish (or poem) and then tie it onto the tree. These days, it is mostly little kids who enjoy doing this, but you will still see plenty of hopeful teenagers and adults writing their prayers for family health, success in exams, protection from earthquakes, finding romance, etc. Since language is no problem in the Land of Wishes, you should pick up a colored sheet yourself and feel free to write in your native tongue. 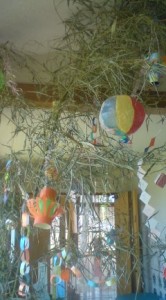 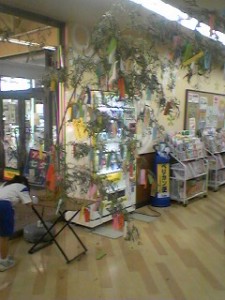 Simply put, the 7th day of the 7th month on the lunar calendar is the day the the stars Vega and Altair are closest in the night sky, and the ancient Chinese developed a romantic story based on this celestial event. Separated for a year by the heavenly river (the Milky Way) two lovers, a cowherd and a weaver-girl get a chance to meet for only one night before being separated until the same time next year. It was on this night that the women weavers and other craftswomen of the ancient Chinese court made supplications to the two stars in the hope of improving their skills. It seems logical enough that wishing on two stars would be more efficacious than wishing on one. 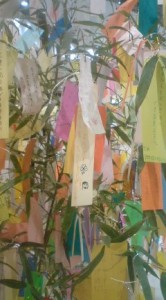 In 8th century Japan, everything Chinese was the rage among the aristocracy, so naturally this star festival was adopted at the Japanese court in Nara. Members of the leisured class made offerings of colorful foods and enjoyed viewing the stars to the accompaniment of koto music. On the other hand, the reading of the characters 七夕 as tanabata, came from an indigenous story about a weaver girl Tanabatatsume (棚機津女), who sat by the riverside weaving beautiful fabrics for the gods. The Tanabata Festival as celebrated in Japan today is a product of the coming together of these these two currents.

The custom of writing wishes or poems on colored paper originated in China. The paper colors used today are still those favored in ancient China: blue, yellow, white, black and red. However, the other traditional paper decoration designs on the bamboo trees as well as the famous Tanabata decorations of Sendai are based on the story of Tanabatatsume.

It also became customary in Japan for boys and girls to pray for better skill in calligraphy and poetry. Many older Tsukabans, as children,would wake up early Tanabata morn and gather the dew from the leaves in the garden. This water would be used to make ink for that day`s calligraghy on the tanzaku. The day after the festival, the tanzaku (strips of paper) were cast off into rivers or the sea. These customs  remain almost only as fond memories in the minds of older generation. 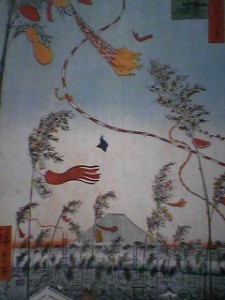 A strange turning point in the history of Tanabata was surely the adoption of the western calendar by the Meiji Government after 1868. The seventh month is August according to the lunar calendar, but is July in the new calendar. These days the 7th day of the 7th month is NOT the time when Vega and Altair meet. This occurs in August. And more to this, the beginning of July is still the rainy season and stars can rarely be seen at all! Sounds ridiculous, but it is true. The festival is celebrated a month too early.

There are many historical details which I have left out and you are probably glad for that. The important thing is that if you spy a colorfully decorated tree in this season, remember the story of the lovers. Maybe you too will be inspired to jot down a poem, or a special wish.