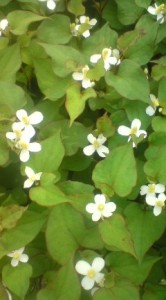 By June, the shadowy fringes of my front yard are carpeted with low lying, heart-shaped leaves, atop which have appeared  little white,  four- petalled  flowers. At the center of each of these, sticks out what looks like a  tiny ear of corn. My BACK yard, which is on the north side of the house and gets very little direct sunlight, is literally overcome by this same plant, which gives off a strong and distinctive odor when stepped on or touched ( a smell which has best been described as being similar to that of OZONE). This scent is SO potent that you still might catch a whiff of it on your hands after garden work – EVEN when you had been wearing gloves ! 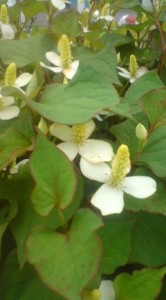 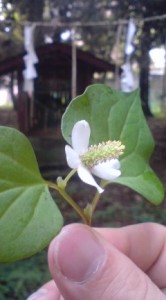 In Japan and many other Asian countries ( especially China, Korea and Vietnam), DOKUDAMI has traditionally been, and is STILL used as an herbal medicine, a CURE-ALL of sorts, said to be good for almost anything that ails you,and an elixir and beauty aid as well. Because its powers are believed to be numerous, in Japanese this plant has  an alternate name- JU-YAKU (十薬 ), Which I guess could be translated as TEN MEDICINES IN ONE, which is also used as a seasonal keyword (for summer) in Haiku poetry. The plant is also used as a vegetable. In Vietnam, the leaves of the DOKUDAMI (giap ca) are added as a garnish to many dishes in the same way that basil or corriander are used. In Southern China DOKUDAMI is cultivated as a root vegetable, and even in Japan some people cook the roots or use the leaves for tempura. 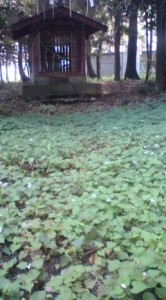 A dokudami carpet around the shrine

Over the years I have asked my Japanese friends and acquaintances if and how they use DOKUDAMI ( this word derives from the characters DOKU, 毒, poison, and DAMI,to stop- thus, it is THE POISON STOPPING PLANT). I have stopped being surprised by hearing how many people have tried it. The most common way of using the plant for medicinal purposes these days is by drying the leaves (by hanging in a shady place or leaving them in the car! ) and brewing DOKUDAMI-CHA (dokudami-tea). Of course, this tea can also be bought at shops or ordered over the internet, but using the leaves from your own garden is much more economical, safer ( you know exactly what you`re drinking), and of course infinitely more fun. Besides containing plenty of essential vitamins and minerals, DOKUDAMI-CHA is said to have antimicrobial and disinfectant properties. Many Japanese also belive that it keeps the skin beautiful and slows down the effects of ageing. 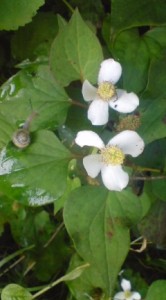 A tiny snail on a dokudami plant in my garden

Whether you try out its medicinal and culinary uses or not, DOKUDAMI shows us once again that if we take the time to look carefully at the little things around us,  and then do a little research, we can almost always discover something amazing ( or at least interesting!) 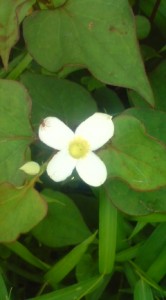