Cherry Blossoms in Full Bloom, but Few Revellers in the Aftermath of the Great Quake and Tsunami 12 April, 2011 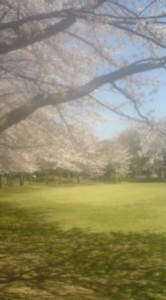 A somber sight- cherry trees in full bloom in a park on a fine day with NO REVELLERS, in the aftermath of the great earthquake

I had never seen anything like it. A small park  surrounded by cherry trees (sakura) in full bloom on a beautiful April day at lunch time- with none of the traditional revellers ( in this case, groups of mothers with kids) who would usually be seen picnicking under the blossoms under such conditions.

A sad and lonely sight, indeed.

Though eating and drinking ( often accompanied by singing and carousing) under the sakura when their flowers are at their best is a cornerstone of Japanese culture eagerly anticipated by just about everyone each year- this time, in the aftermath of the great earthquake and horrific tsunami which struck Japan on March 11th, these trees, which our now exploding in their full glory, are standing very much alone.

There was no media build-up  following the progression of the CHERRY BLOSSOM FRONT as it moved across the Japanese archipelago, a usual feature of early spring, nor could we find the usual ads promoting famous cherry spots  which would usually have adorned the train stations at this time of year ( one of my favorite places, which features ONE ancient and magnificent tree, is unfortunately located in Miharu, in Fukushima Prefecture- not far from the damaged nuclear plant).

And now , as the sakura have achieved MANKAI ( full bloom), if there ARE any people doing HANAMI ( having a cherry party) at all, there is none of the revelry or ribaldbry which makes the tradition so unique- it is a quiet, solemn affair.

This is only natural. With what happened last month, no 0ne is really in the mood for a traditional cherry blossom party. And more to that, there are concerns about radiation ( in fact one foreign resident of Tsukuba who did go out to enjoy the cherries this past weekend, cut his outing short after having checked the direction the wind was blowing- right in from Fukushima Prefecture)- which despite the fact that the levels are NOT dangerous to our health ( as we have been assured) still makes it creepy and uncomfortable to linger outdoors for long.

As I walked around the perimeter of the park beneath the pink canopy created by the blossoms, I thought about the PASSING NATURE OF ALL THINGS (MUJO,無常), which these short lived flowers represent. And though the delicate petals would all be gone in a few days, I knew that they would be back next year, the year after that, and the year after that……..

and by that time, the rebuilding of Japan, and the healing of our damaged spirits will already have been well underway-

and you can bet that the traditional revellers will be back with the blossoms. 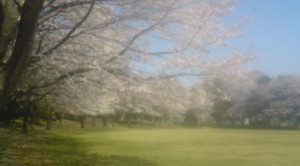 Forlorn cherry trees in Tsukuba, one month after the great quake

I have written about what makes HANAMI ( cherry blossom viewing parties) unique:

and also about the great cherry tree in MIHARU, Fukushima Prefecture: