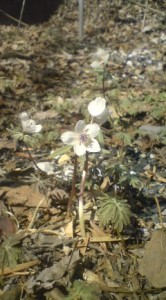 Very few flower species bloom in Japan in January, February or early March. That is why nature lovers, or those who like to take note of the daily changes which occur in the natural world around us throughout the year, eagerly anticipate the appearance of EACH AND EVERY ONE of these cold weather bloomers- and savor them while they last.

Of these Japanese harbinger- of- spring flowers, the one with the easiest to remember name (for those familiar with Japanese culture) is SETSUBUN-SO (節分草)- named after the popular BEAN THROWING festival- which is held on February second ( and was traditionally held at the midway point between the winter solistice and the spring equinox). 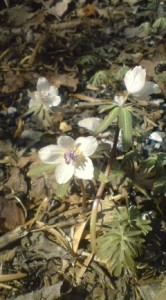 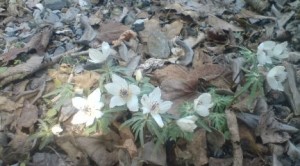 This year, I was a little worried that I would miss the setsubun- since I was suddenly hospitalized for gall stones just before they were about to bloom. Luckilly though, I was released in a week, and was able to catch eranthis pinnatifida ( the eranthis of this scientific name means SPRING FLOWER, in Greek) just past its peak.

I was not surprised that when I got to the best setsubun-so spot in Tsukuba, there were some flower lovers with some serious camera equipment down on their bellies taking photos.

I too, even with my freshly cut and sutured abdomen, got down all the way on the ground for a long, close look. I then joined the photographers in shooting away ( though all I had with me was my cell phone camera!

I was a little distraught, however, to find the number of flowers greatly decreased compared with previous years ( in fact setsubun-so have been listed as endangered plants in Japan`s redbook). 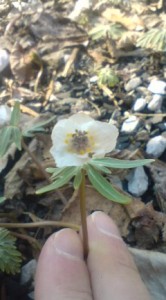 Setsubun-so grows in peaty forested areas with plenty of sun exposure. It takes advantage of the fact that the trees around them still have no leaves and let in the light. By the time the forest floor gets shadier, as the canopy fills out with leaves with springs advance, the setsubun-so flowers wither away.

If you would like to see this flower for yourself ( you WILL have to get down on the ground to fully appreciate it!), the most conveninet place would be the Tsukuba Botanical Garden, where some setsubun-so can be seen growing just near the FUKUJU-SO, just across the bridge on the other side of the pond ( on the right).

There are several place in Japan which are famous for Setsubun-so and which promote special setsubun-so viewing.

In the Kanto area, the best of these is in Chichibu, Saitama Prefecture. Just take the Chichibu Tetsudo train line and get off at the Mitsumine Guchi (三峰口) Station. The Ryokami Village (両神村) has buses to take you to the flowers!

One blogger ( Imai-San) has posted some good pictures of that area and of the setsubun-so ( along with some other famous early bloomers: plum, fukuju-so, and ro-bai)