In the Quake`s Aftermath- a Visit to Some Farms, Shrines, and Temples in Tsukuba 28 March, 2011 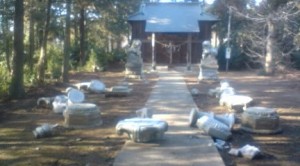 One thing I often do when I feel the need for a psychological or spiritual boost, or at times when I just want to get away from it all for a short time and commune with my thoughts, is head for one of Tsukuba`s numerous small JINJA (shrines). No, I do not pray to the Gods enshrined there, nor do I even enter the halls themselves ( which are usually locked up). What I enjoy is the aesthetic experience of what I find to be the most uplifting of all religious architecture- a perfectly simple, yet beautiful, man-made structure set in the middle of a shadowy, sacred grove (CHINJU NO MORI), usually composed of ancient ( and often gnarled) trees, teeming with birdlife.The  grounds of these woods are also usually adorned with various sacred objects made of sticks, stone and straw. Leaving the concrete, plastic and steel world of modern Japan and entering into these oases of greenery and tradition is always wonderous and mysterious ( for me).

As you can imagine,there HAS been a lot on my mind these days. The horrors of the Tsunami, the plight of the refugees, and the uncertain future facing all of us living in this part of Japan. With reports of radioactivity having been found in various vegetables tested in Ibaraki Prefecture ( as well as in the water, and milk), we live here with a day to day anxiety, and for the local farmers it has become a nightmare. It is reasonable to assume that there will be no takers for any produce with the stigma of the label IBARAKI PREFECTURE on it- even if it were given away for free.

This is a terrible blow to this prefecture, which prides itself on its delicious fruits, vegetables, and rice. In fact , now the question is if the farmers will plant rice ( or vegetables) at all this year. There is a good chance that they will not. Not only will this be devastating to Japan`s food security (rice self sufficiency) and the local economy, but it will have a huge impact on the wildlife- the birds,small animals and insects, which have adapted themselves to  lives which coincide with Japan`s agricultural (rice) cycle. 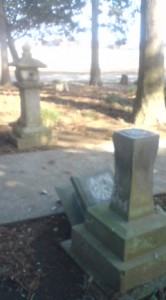 With this grim situation in mind, I was thinking ( and worrying) about Ryuichi Someya, a farmer I have previously written about who has put his heart and soul ( as well as all his time and energy) into growing the most delicious asparagus I have ever tasted. I went to see how he was doing and found him on his farm in Tsukuba`s Hakke (百家) neighborhood. Though he MUST be extremely nervous about the future of his farm and his beloved asparagus, he didnt let it on to me. With a big smile on his face, he gave me a tour of the grounds and cut me a bunch of choice sprouts to take home. Displaying his never-say-die spirit, he told me that he would go on with his farm work ( which is gruelling) as usual- and hope that when his produce is tested it will show negative for radiation. Im not sure if even that will help him get customers, but I sure do hope that somehow things work out ok for Someya-San, and the rest of Ibaraki`s (as well as Fukushima`s and Chiba`s) farmers.

For more on Someya-San`s farm:

Saying good-bye, with the bundle of asparagus in my arms, I was not in the best of moods- the perfect time to seek refuge within the precincts of a shrine! What I found when I arrived at one, however, really surprised me. Though Tsukuba suffered relatively little damage in the recent earthquake, mostly fallen roof tiles and stone walls in the older neighborhoods, the grounds of the first shrine I visited were  in shambles- all the sacred stones had been knocked out of place! And since some of these stones were large lanterns which had toppled over, I realized that being at one of these shrines would have been one of the most dangerous types of places to have been at when the quake struck.

I went on to check out more shrines in Tsukuba and found similar situations at nearly every one. 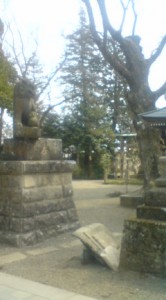 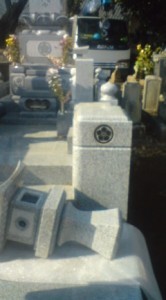 Visiting a Buddhist temple ( where there are usually cemeteries) I found that many gravestones had been toppled over by the forceof the quake . The professional stone movers were already at work with their winches setting things straight. It will be a long time before their work is done. 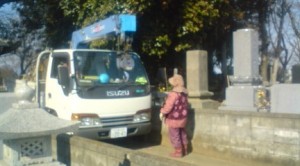 Some of the many stone movers who are busy at work now in Tsukuba, resetting fallen sacred stones and gravestones

(With the nightmarish devastation and horror wrought by the tsunami in the Tohoku ( North-Eastern) Region, I hesitate to write about the slight damage ( mere inconveniences) experienced by us here in Tsukuba. Still, it seems that there are many, especially those who once lived here or have friends here ,  who have an interest in what is going in this part of Japan).

The most dramatic (and ironic)  damage sustained by a shrine in the recent earthquake ( not the tsunami) was the loss of the huge stone torii gate at Ibaraki Prefectures Number 1 Shrine (ICHINOMIYA)- the Kashima Grand Shrine. The reason I say it is ironic is that this shrine was the center of the popular earthquake suppression cult known as  NAMAZU SHINKO ( 鯰信仰)- catfish worship .  In Japan it was believed ( before modern science) that earthquakes were caused by an immense subterranian catfish which would occassionally thrash its tail around, shaking up the land on which we live. Devotees would make pilgrimages to this shrine to make sure the catfish remained calm- or should I say subdued, as there is a small stone ( the KANAME ISHI) within the precincts of the shrine which was ( and still is by some) believed to restrain the catfish`s head.

For more on the KANAME ISHI:

and if you`d like to know about the fascinating character who helped preserve Japan`s SACRED GROVES- MINAKATA KUMAGUSU (南方熊楠):