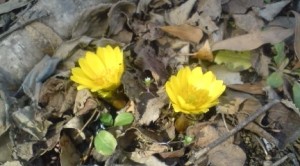 Like tiny yellow PARABOLIC ANTENNAE, these flowers emerge from the frosty (often snow covered) ground in the first weeks of February- exactly when  New Year`s ( O-Shogatsu) fell according to the old Japanese calendar (and the same time the Chinese still celebrate it). It is because of their timely appearance, at what was the most auspicious time of year, that these curious looking, low laying, poisonous plants are considered great symbols of good luck. This is reflected in the name by which they are still called- FUKUJUSO (福寿草), which means the GOOD FORTUNE- LONG LIFE PLANTS. For the same reason they have also been called GANJITSU-SO (元日草), the New Years Day Plant, and during the Edo Period (1600-1868） these stumpy, bright yellow, INDIGENOUS flowers were sold in flower pots, often coupled with other auspicious plants of the season, as New Year`s decorations. Besides the real fukujus0 (called Adonis ramosa in English), painted versions also made for a popular decorative motifs for the beginning of the year. 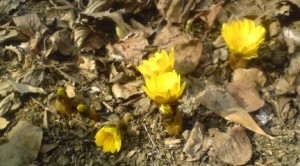 I have already mentioned that the fukujuso`s flowers remind one of parabolic antennae. They not only look like them, they ACT like them, as well! The flowers actually follow the movement of the sun as it crosses the sky. Because of this, the temperatures inside these flowers becomes quite higher than the surrounding air, which helps ( along with the bright yellow colors) the few insects which have become active in the cold weather. These little critters can often be seen flying about from one fukujuso to another. The pollen spread by these insect helps to put  spring into motion.

As the time to go approached, I walked down to the garden`s pond and crossed the bridge. On the far side of it, to the right, I found the fukujuso emerging from the ground, making it an extra AUSPICIOUS day. 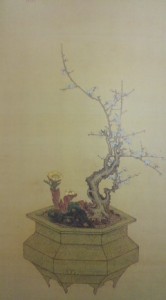 Fukujuso sometimes CAN be dangerous, however, as they can be picked and eaten (before they flower) by wild vegetable (sansai, 山菜) enthusiasts who mistake them for FUKINOTO, a favorite sprout of spring. There have been some well-publicized cases of this, including one in which a cast of reporters for a TV show about SANSAI picking ingested some fukujuso on camera. Luckilly, no one died.