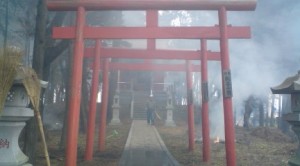 Getting ready for Hatsu Uma ( February 8th this year), by cleaning the precincts Inari Shrines 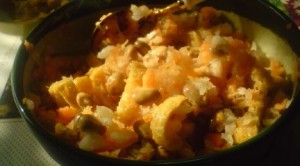 SUMITSUKARI- a dish served only on Hatu-Uma which is unique to certain parts of Ibaraki and Tochigi Prefectures. This uncooked type (生) was prepared in 2011 by Asako Seo of Tsukuba

This morning as I was get getting ready to leave for work, my front door suddenly slid open. It was my next-door neighbor. She was bringing over some SEKIHAN (  glutinous rice cooked with beans- something eaten on special occassions). It all happened so suddenly that I forgot to ask WHICH special event she had cooked it for. You see, as it turns out, this year two traditional events fall on the same day! There is SETSUBUN, the Bean Throwing Festival which is celebrated nationwide- and HATSU UMA, a special day which is quite obscure on a national scale but which has long been important in this part of Japan ( Ibaraki and Tochigi Prefectures).
Since I have already written in detail about SETSUBUN, let me tell about this area`s unique way of celebrating HATU-UMA- which literally means the FIRST HORSE.
If you look at a Japanese calendar, you will notice that every day of the month has been designated as belonging to a different animal of the Japanese zodiac. This coming Tuesday ( the 8th, on the Gregorian calendar), is the first Day of the Horse of the second month of the year, making it HATSU UMA (初午, the First Horse）, a day which has been celebrated for more than 1000 years by devotees of O-INARI-SAMA. There are tens of thousands of Inari shrines around Japan (more numerous than any other type of shrine), ranging from the grand to the tiny (these are called HOKORA, 祠), which are instantly recognizable by their red or vermilion torii gates (sometimes lined up one behind the other forming a tunnel!) and their many fox statues and figurines which lead to the mistaken notion that the foxes are the Gods of these shrines. Even those who have never been to Japan have probably seen them in books or posters as these exotic features make them a very popular subject for photographers. 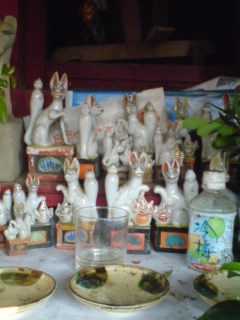 Over the years, as Inari shrines sprang up throughout the country, they became associated with other things besides agriculture, all in accordance with various stages of Japanese economic development: industry, business, sales, household safety, the arts, etc. Inari is even considered the patron of mahjong parlors and tobacconists. Truly an all-purpose deity. In fact, the Fushimi Inari Shrine actually enshrined four other Gods besides Ukanomitama No Kami, which have become incorporated into the Inari of that shrine, though not necessarily all of the Inari shrines, especially the small ones, around Japan. 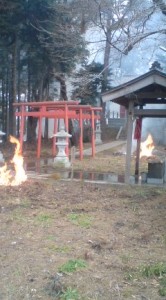 To celebrate the Inari’s original descent to Japan, devotees begin by cleaning the grounds around the Inari Shrines, as well as the shrine structures themselves. Today I chatted with the men who were getting ready for Hatsu Uma ceremonies at the Inari Shrine in Inarimae in Tsukuba, just across from Yu World and Cineplex. They were burning fallen leaves, cleaning the shrine building and preparing new sacred ornaments of straw, rope and paper, all in preparation for the ceremony which will be held at 10am on Tuesday ( February 8th). 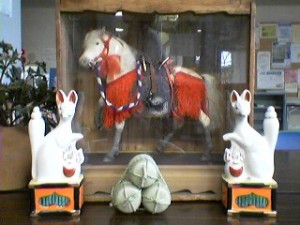 Abura-age is also added in homage to the fox messengers. This special dish is known either as SUMITSUKARI or SUMITSUKARE, depending on the area.

Sumitsukari and Celebration rice (sekihan) are also often wrapped in straw (separately) and offered to Inari Shrines and to the Household Gods ( Ujigami- Sama, 氏神様).  Since this dish does not spoil easilly, what it is usually eaten by the family for a few days- anyway, until it is all finished. 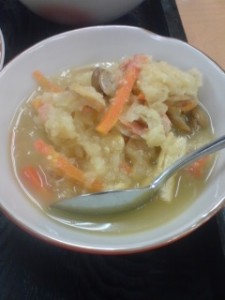 SUMITSUKARI appears to be experiencing a revival of sorts. I have met several women who have prepared this dish for this weeks celebrations, and there have even been classes in how to make it at community centers in this area. If you make it to the shrine in Inarimae on the morning of the 8th you might get a chance to taste this very unique dish. If you cant and are still interested, tell a local farmer that you`d lke to try some. Im sure they`d be happy to share with you. 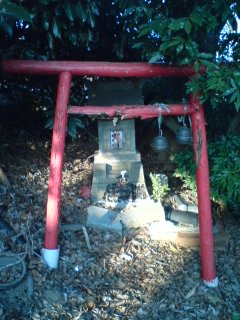 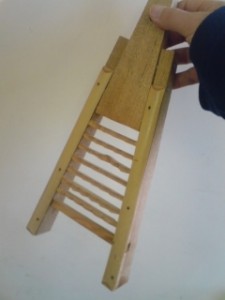 Ingredients :Half a daikon radish, half a carrot, half a cup of setsubun soy beans, a sheet of ABURA-AGE ( fried tofu), a tablespoon of Sake dregs, dashi (Japanese soup stock) to taste, and 2 tablespoons each of sugar, vinegar, and soy sauce.

Roughly grate the radish and the carrot. Lightly grill or toast th abura-age, and chop up into thin pieces. Peel the soy beans after roasting a bit. Add to pot with therest of the ingredients and simmer. 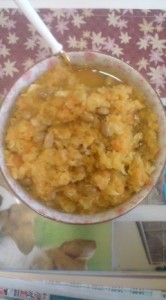 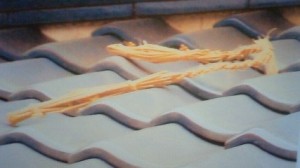