A late winter walk leads to the UBAYURI (姥ユリ) a type of wild lily, which is more beautiful AFTER its flower has fallen off- AND was an important food source for Japan`s early inhabitants 20 February, 2011

On an uncomfortably cold day like today, you might not believe me when I tell you that spring IS just around the corner. Sure, plenty of very cold ( and even snowy) days probably still lay ahead, and the March winds which blow off Mt Tsukuba ( the Tsukuba Oroshi) can be frosty and brutal ( for cyclists especially). But I`m not talking about the temperature. When I speak of spring I am thinking of all the VEGETATION, all the GREENERY which in the coming weeks will start emerging from the soil. Already this week I can sense all of that LIFE, chomping at the bit, getting ready to burst forth. You can almost hear it.

Knowing that there is is little time left to savor Tsukuba`s distinctive wild winterscapes, I took a long walk through the fields and woods near my house in Konda. It was not all just dried out reeds and branches 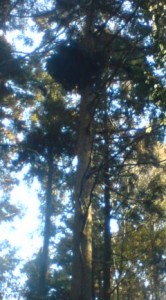 A new goshawks nest in the Konda Woods (Tsukuba)

I decided to start out by heading to the area above which I have often seen, in recent weeks, one of our neighborhood goshawks ( O-Taka) perched high up on some sort of communications tower. I thought that perhaps it was around  there that the majestic birds will be nesting this year.

Stepping into the woods in my neighborhood can sometimes be creepy. With all the owls, and the goshawks, there are often plenty of small animal and bird remains, the feather, fur and bones, which the birds of prey ( and later the scavengers) leave behind. Right away, I knew that the goshawks were active in that area. The route I had chosen was littered here and there by blotches of such leftovers. There were also plenty of hawk droppings.

Getting deeper into the forest, I often stopped to scan the canopy ( still thick in winter because of all the evergreens), in the hope of spotting a nest.  Just at the point which was probably furthest from any road ( in any direction), I found it, letting out a big WOW! Very impressive- amazing, even suddenly coming across it.

I then resumed my ground search in the general area around the nest. 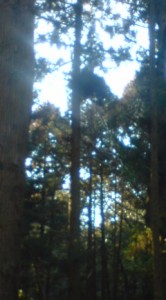 Another view of the nest

About 20 meters east of the grand tree high atop which the goshawks had chosen to make their home, was a little slope- the remains of an ancient burial mound (kofun, 古墳). Still scouring the ground, I slowly proceded up it. What I found on top almost made me forget all about the nest- in fact it brought me back the original purpose of this hike- marvelling at the interesting withered vegetation of winter.

I found myself suddenly walking among what at first seemed to be the commonest of dried out reeds- but raising my eye-level to what would be my chest height, I found that the little ridge I was on was covered with one of the most beautiful features of the Japanese woods in winter- the dried out UBAYURI (姥ユリ), a type of wild lily ( with the scientific name  Cardiocrinum cordatum )

Of course, by this time of year these plant`s flowers had long disappeared. So what, you may ask, makes them so special.

Well, after their blossoms have fallen away, the fruit of this lily appears. Eventually, this dries, too, and opens up into three petal-like parts- which are connnected by what look like fine filaments. Really something special to look at. And how strange I thought that, though many types of lily flowers are spectacular, the UBAYURI`s blossoms are rather dull and plain ( though they ARE large!). That means in winter, without their white cone-like flowers, they are probably more attractive than they are in summer!

In fact, they are often added to winter flower arrangements, as symbols of the season.

Looking closely I could still find some of the lily seeds with had been blown out of their casing. These, too are remarkable to examine, as they look like very finely sliced flower bulbs. Since lilies are famous BULBS, some are surprised to hear that they also have seeds. Well, they do, and they are worth a close look. 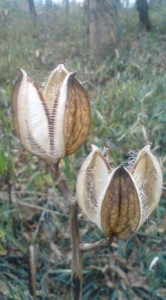 The Ubayuri as it looks in winter after having released its seeds ( Tsukuba, Konda 2011)

Japan is considered to be something of a TREASURE HOUSE of lillies, with more than 10 indigenous species ( some of which were introduced to Europe in 1829 by the German physician Von Siebolt, who was at the Dutch trading post of Dejima, Nagasaki).

And though the Europeans and others took up these flowers with great enthusiasm for decorative purposes, in Japan ( and the rest of North-East Asia) lilies have not only been admired for their beauty and scent- they have also been EATEN.

The bulbs of various types of lily were an important source of starch for the ancient Japanese andYuri Ne ( lily bulbs) are still an important feature of Japanese special O-Sechi dishes eaten over the New Year holiday. 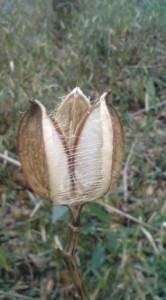 Besides the holiday season Lily bulbs are available at supermarkets and food cooperatives and can be prepared in a variety of ways. One variety in particular, the Ko Oniyuri, is cultivated for its bulb ( though some other varieties can also be eaten)

When cooked these bulbs look like pieces of GARLIC (also bulbs) when served, and their texture is also quite similar to the STINKY ROSE. Their flavor , however, is very subtle and starchy, and is influenced by the seasoning used ( as opposed to influencing the taste of everything else, as garlic does). 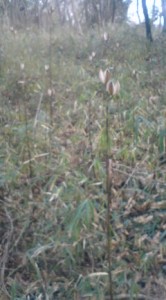 The ubayuri stand tall in one area of the woods

One very interesting thing that I learned after I got back from my walk and started doing a little research on the UBAYURI was that a larger type of the same lily, called the O-Ubayuri (Cardiocrinum cordatum var. glehnii) is one of the most important food sources for the Ainu people.

The O-Ubayuri grows mostly in Hokkaido and in the colder, snowier, Japan Sea side of Northern Honshu. 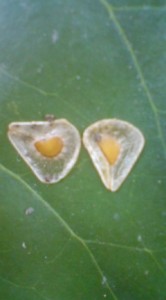 Two UBAYURI seeds stuck on a nearby leaf

For anyone interesting in the process used to make TUREP, which is the dish that the Ainu make of of the starch of the O-Ubayuri, have a look at this page: 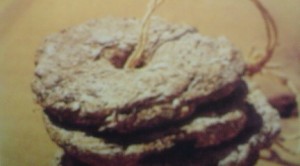 In a couple of weeks I plan on going back to that same spot and dig up a few of the bulbs and try to make some Japanese dishes with them.

I think I will give TUREP a try , too, using the smaller type of UBAYURI.

I will tell you how it goes! 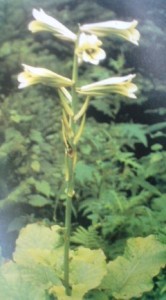 Ubayuri as they look when blooming in summer

And I hope that before the bulbs are ready for the taking, I will be able to get back a coupek of more times to enjoy Tsukuba`s wonderful winter wilds.

For some pictures of Japan`s lillies IN SUMMER see: 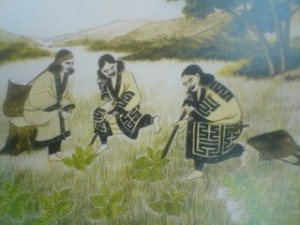