A Fine Day to Try The Segway Human Transporter (and for Cosplay) near Tsukuba Center 13 February, 2011 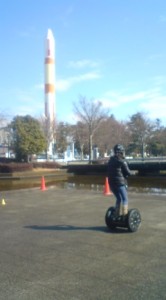 Learning to ride a Segway Human Transporter in Tsukuba

I cant remember exactly when it was, but it must have been more than a decade ago when there were rumors of a new invention, soon to be revealed, which would radically tranform the way we all lived.  When I finally DID find out what this contraption was, a silly sort of battery-powered scooter upon which the rider stands upright, I could not help but feel GREATLY LET DOWN ( and I guess that MOST people felt the same way), and in all the years since I had only seen this environmentally friendly machine ONCE- at Narita Airport being ridden by a patrolling security guard.

Once, until TODAY, when I saw three or four SEGWAY Human Transporters ( as these vehicles have been dubbed), which have been lent by Segue Japan to Tsukuba City for a special event focusing on CLEAN ENERGY!

That means that YOU, or anyone else with the gumption to try riding one of these crazy machines ( as you have probably heard the man who had bought the company from its original owner died after falling off a cliff while riding his Segway), can give it a try- completely free of charge!

To assist you in getting the hang of it, several Tsukuba university students, who have been trained by the Segue company, will  be there, as instructors.

You will be able to take advantage of this opportunity through February 16th, from 10AM to 4 PM- at the building in the middle of the pond, just across from Tsukuba`s Expo Center.

While there, you can also try riding a battery powered bicycle. While waiting for your turn you can soak your feet in the warmth of a solar- powered foot bath.

I gave the Segue a try myself, and I must say that I enjoyed it alot. It IS quite amazing! You can learn the basics in a couple of minutes and then can guide the scooter with the merest shifting of your weight.

It will not revolutionize society, but it sure is fun. 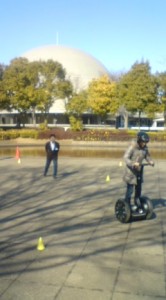 Getting the hang of it!

Those of you who tried the Segue today (Feb. 13th 2011), or were just enjoying a stroll through Tsukuba`s Central Park, were in for an EXTRA treat- The Cosplay Festival- which was held a mere 100 meters away from the Green Living Event!

Dozens of young men and women ( and some not so very young) were dressed up as their favorite ANIME or game characters! What did they do? Well, nothing much- just alot of preening and posing before the cameras. Yes, there were plenty of eager photographers ( professional, or at least with professional looking equipment!) shooting away. It seemed as if some were even paying money for the Cosplayers to pose.

I found out the hard way that you had better ask for permission before taking pictures at such events. As I was taking a couple of candid shots ( with my cell phone), three girls came over to scold me for my poor manners. Then again, by being so authoritarian they might have just been getting into their characters- they were dressed as Nazis! 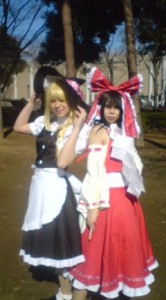 It was all quite bizzarre! A conversation that I overheard between a 40- ish Japanese couple sums it up. Shocked by the scene of so many photographers snapping away at the Cosplayers, the wife disapporvingly said- Why are they paying them so much attention? Why are they taking pictures?

Her husband cooly responded:  Its……. CULTURE.

And what brings all this culture to Tsukuba? The Tsukuba Express! Yes, train-lines, like rivers of old, are conduits of culture- and now brainy, bookish conservative Tsukuba is linked directly to Akihabara- the OTAKU Capital of Japan!

TX has brought the commuters, the Mt.Tsukuba Day-Hikers, and now the Cos-players!

But sorry, if you werent there today, you will probably have to wait a while before before such a scene at Chuo Koen ( Tsukuba`s Central Park) 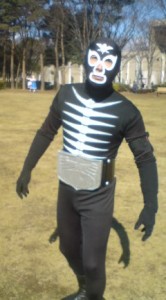 For more about the Segue: 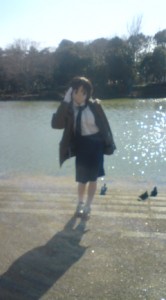